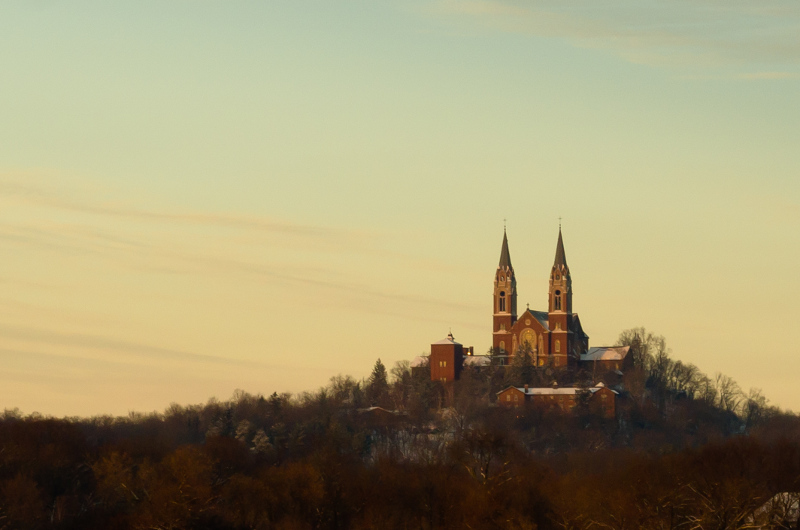 Present-day Washington County borders Milwaukee and Waukesha counties to the south, Ozaukee County to the east, Dodge County to the west, and Fond du Lac and Sheboygan counties to the north. The area was under the legal jurisdiction of Milwaukee County until 1839.[1] After separating from Milwaukee County, Washington included land that is now part of Ozaukee County. Conflicts over where to place the county seat were ultimately resolved by division into two counties. When the Wisconsin legislature made Washington County a separate legal entity in 1853, West Bend became the county seat.[2] Today, Washington County measures twenty-four miles from north to south and eighteen miles from east to west.[3] It encompasses twenty municipalities: two cities, six villages, and twelve towns. Additionally, the County contains several unincorporated hamlets and a small portion of the City of Milwaukee.[4] Washington County’s government leadership includes elected supervisors from each of twenty-six districts and an appointed County Administrator.[5]

Following the U.S. Public Land Survey and land cessions made in 1833 by the Ojibwe, Ottawa, and Potawatomi, property in Wisconsin became available for sale beginning in 1835. Beginning in the 1830s, settlers in Washington County included Yankees—predominantly from New York and Ohio—Irish, and Norwegians. The majority of those purchasing land were German.[6]

Agriculture quickly emerged as Washington County’s central industry and continues to play a significant role in the local economy. While grain was the major output at the turn of the twentieth century, dairy and stock farming were also important enterprises.[7] In 1858 the Washington County Agricultural Society hosted the first County Fair in West Bend. The event showcased the variety of goods produced by local farmers.[8]

Waterways, and later, railroads spurred the development of Washington County. Early inhabitants initially made their homes along river banks, constructing watermills and dams to harness the power of the running water. In sawmills, lumber felled to clear land for farming was cut into usable boards; in gristmills, grain grown on cleared farmland was processed into flour. Local residents used and sold both final products. Beginning in the mid-1850s, the railroad allowed Washington County’s residents to sell these products and engage commercially with a market expanding beyond its boundaries.[9]

Railroads inspired both residential growth and municipal incorporation. For example, the Village of Kewaskum incorporated in 1895 after the arrival of the Chicago and North Western Railway.[10] On the other hand, hamlets without railroad stops usually did not incorporate because they did not develop as commercial centers. St. Kilian, Wayne Center, and Kohlsville all remained small, unincorporated hamlets within the Town of Wayne.[11]

After the majority of the land in the county was parceled, sold, and settled, the population of Washington County remained relatively stable for nearly a century. The population grew only marginally, from 23,622 in 1860 to 28,430 in 1940.[12] Many municipalities, including Erin and Farmington, did not meet or exceed their 1860 populations until well into the twentieth century.[13] But after World War II, the population of Washington County grew at an unprecedented rate, gaining between twelve and forty percent more residents each decade.[14] Improved roads facilitated travel both within and outside Washington County in the late 1940s. Major thoroughfares, such as the north-south State Highways 41 and 45, whose construction began in the early part of the 1900s, connected Washington County to the surrounding region and beyond.[15] The expansion of the road system made it easy for Washington County residents to commute to urban areas such as Milwaukee for work and entertainment.[16]

As early as the 1960s, many longtime Washington County residents criticized the parcellation of historic farmland for residential development.[17] At its peak in 1880, Washington County hosted 3,075 farms. From that point, the number of farms in the County hovered in the high two thousands until a marked decrease in the number of farms beginning in the mid-twentieth century. By 1987, fewer than one thousand farms remained in the County. While much of the former farmland has been repurposed for residential development, several other factors, including the preservation of relatively large tracts of land for public use, implementation of federal policies, and the changing face of agribusiness have also contributed to this trend.[18] As Washington County’s population continued growing into the twenty-first century, concerns related to suburbanization have arisen.[19] This includes negotiating annexation issues as well as balancing the call to preserve the rural landscape with providing residential development opportunities and municipal services for a growing population.

Shaped by the encroachment, receding, and melting of a giant ice sheet nearly 20,000 years ago, the land in Washington County is part of the Kettle Moraine.[20] This process created the steeply-sloping hills, valleys, and small lakes that characterize the region’s topography and deposited material in its movement, giving Washington County large gravel pits. This resource has served in the construction of new roads as well as residential and commercial subdivisions.[21]

Washington County is home to twenty-six entries on the National Register of Historic Places.[22] The majority of the entries are examples of domestic, commercial, or ecclesiastical buildings; the list also features several historic districts within Hartford.[23] A notable inclusion is Holy Hill, a minor basilica of the Roman Catholic Church, located within Erin. Constructed in phases beginning in the mid-1800s and completed in 1931, Holy Hill is perched atop one of the highest points in the County and attracts more than 500,000 visitors annually.[24]

Several facilities seek to preserve the County’s natural landscape and wildlife habitats and facilitate outdoor recreation. Kewaskum contains more than three thousand acres of the Northern Unit of the Kettle Moraine State Forest.[25] The Eisenbahn State Trail begins in West Bend and extends northward through Kewaskum and into Fond du Lac County. A twenty-five mile converted railroad corridor, it is the longest bikeway in the County.[26] Located within Farmington, Lizard Mound County Park is part of the Washington County “Island” Effigy Mound District. It preserves a Native American burial site. Hiking trails weave through the effigy mound system, which was constructed around the second half of the first millennium CE.[27] There are also several wildlife and conservation areas within the County, including the Allenton Marsh Wildlife Area in Addison and the Jackson Marsh Wildlife Area.[28] 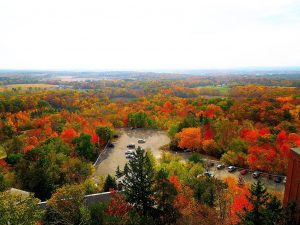 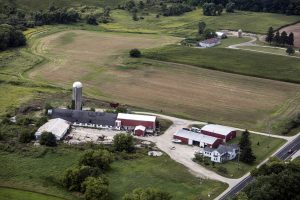