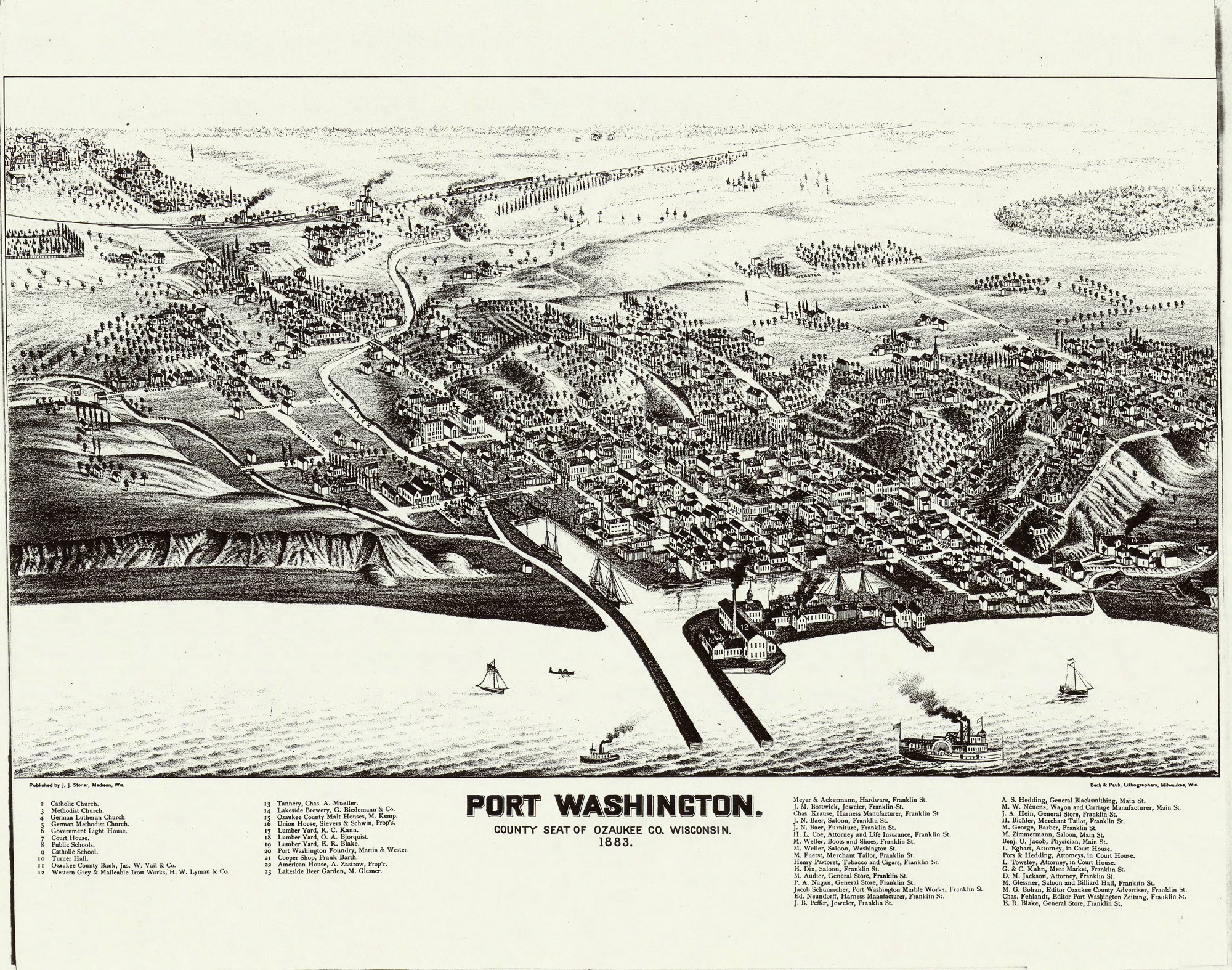 Located directly north of Milwaukee County, Ozaukee County is an integral part of both the Greater Milwaukee Area and the Lake Michigan waterfront. Although it is the second smallest of Wisconsin’s counties, having only 233 square miles of land, Ozaukee County was home to 86,395 residents in 2010.[1] These residents live within 16 municipalities—three cities, seven villages, and six towns.[2] From the county seat of Port Washington, a board of supervisors and a board-appointed county administrator oversee county government.[3] Although Ozaukee County was primarily rural and agricultural in the nineteenth century, transportation advances and increased suburbanization strengthened the connection between Ozaukee County and Milwaukee in the twentieth century.

Ozaukee County’s original growth was tied to its water resources. Twenty-five miles of Lake Michigan shoreline form the County’s eastern boundary.[4] While piers once existed in the towns of Grafton and Belgium, the bluffs along the County’s southern lakeshore make for poor bays.[5] Port Washington is the County’s only significant harbor.[6] In addition to the Lake, the Milwaukee River and smaller creeks cross the County.[7] These waterways sustained Ozaukee County’s forests and probably provided transportation for its early residents.

The mound builders may have been among the first residents of the land that is today Ozaukee County. Although no effigy mounds have been found in the County, Increase A. Lapham identified circular mounds near the Village of Saukville.[8] Other native groups settled in the region in the following centuries, and the County’s name, a reference to the Sauk nation, echoes this period.[9] In the 1830s, federal treaties with the Menominee and Potawatomi ceded Ozaukee County to the United States.[10]

Buying land that had been vacated by the native tribes, white settlers began arriving in the 1830s.[11] The first white residents in the region were Yankee-Yorkers and English immigrants.[12] Irish and German immigrants arrived in Ozaukee County in the 1840s, and by 1880, the majority of County residents were Germans and Luxembourgers.[13] Wooster Harrison, an early Yankee-Yorker settler, established Wisconsin City (now Port Washington) in 1835.[14] One year later, the city was made the seat of Washington County, which at the time encompassed both modern Washington and Ozaukee Counties.[15]

The location of the county seat became a significant source of strife between local municipalities. Port Washington was distant from early population centers in the Towns of Grafton, Mequon, and Germantown.[16] County business was conducted in various places, including the Towns of Grafton and Mequon, before a series of votes to determine a permanent seat were conducted in the late 1840s.[17] Plagued by inconclusive results and election tampering, the County Board of Supervisors turned to the Wisconsin legislature for a decision.[18] In 1850, the legislature decided to split the County into northern and southern sections. The northern section would remain Washington County, with its seat at Port Washington, while the southern portion would have become the new Tuskola County, with its seat at Cedarburg. Washington County voters, split in their local loyalties, failed to ratify the legislature’s decision.[19] Three years later, Washington County was finally divided. Residents of West Bend and Port Washington worked together to lobby and vote for an east-west division of the County, which would allow both municipalities to become County seats.[20] Thus, in 1853, Ozaukee County was created. The decision to divide the County was not universally popular. When representatives from the new Washington County seat at West Bend came to Port Washington to retrieve relevant records, they were chased from the town. The records were hidden and turned over to Washington County officials only months later.[21]

In 1862, the Civil War brought a new challenge to the County government. On November 10, residents rioted in Port Washington in opposition to the draft.[22] Roughly 200 people, many of them Catholic Luxembourgers, believed they were being disproportionately targeted for military service.[23] The army was called in from Milwaukee to restore order.[24]

In the years following World War II, the automobile connected Ozaukee County more closely to Milwaukee. As Milwaukee’s suburbs expanded beyond the county line, the population of Ozaukee County more than quadrupled from under 20,000 in 1940 to over 86,000 in 2010.[31] Interstate 43, approved by the federal government in the 1960s and completed between Milwaukee and Green Bay in 1981, facilitated Ozaukee County’s growth.[32] Thanks to the quickened commute, Ozaukee County’s newcomers could live in newly-constructed subdivisions while working in Milwaukee. The majority of County residents continue to live in these mid-to-late twentieth century homes.[33] In 2014, nearly half of employed county residents travelled out of Ozaukee County for work, and the County’s median household income totaled $75,643.[34]

The travel corridor runs both directions between Milwaukee and Ozaukee Counties. In 1996, a commuter bus opened to bring Milwaukee workers to jobs in Ozaukee County.[35] The County has several large employers, including Concordia University, Rockwell Automation, hospitals run by Columbia-St. Mary’s and Aurora Healthcare, and the County government itself.[36] Despite increased suburbanization, much of the County remains rural. Over half of Ozaukee County’s land remained in agricultural use in 2007.[37] The Interurban trail and fifteen county-maintained parks reinforce this rural atmosphere, while providing recreation opportunities for visitors and the County’s increasingly suburban population.[38]

History of Washington and Ozaukee Counties, Wisconsin Containing an Account of Its Settlement, Growth, Development and Resources; An Extensive and Minute Sketch of Its Cities, Towns and Villages—Their Improvements, Industries, Manufactories, Churches, Schools and Societies; Its War Record, Biographical Sketches, Portraits of Prominent Men and Early Settlers; The Whole Preceded by a History of Wisconsin, Statistics of the State, and an Abstract of Its Laws and Constitution and of the Constitution of the United States. Chicago, IL: Western Historical Company, 1881. 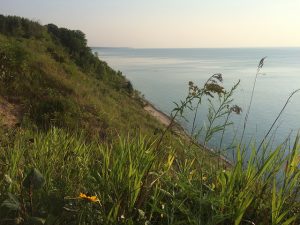 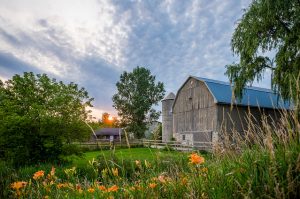