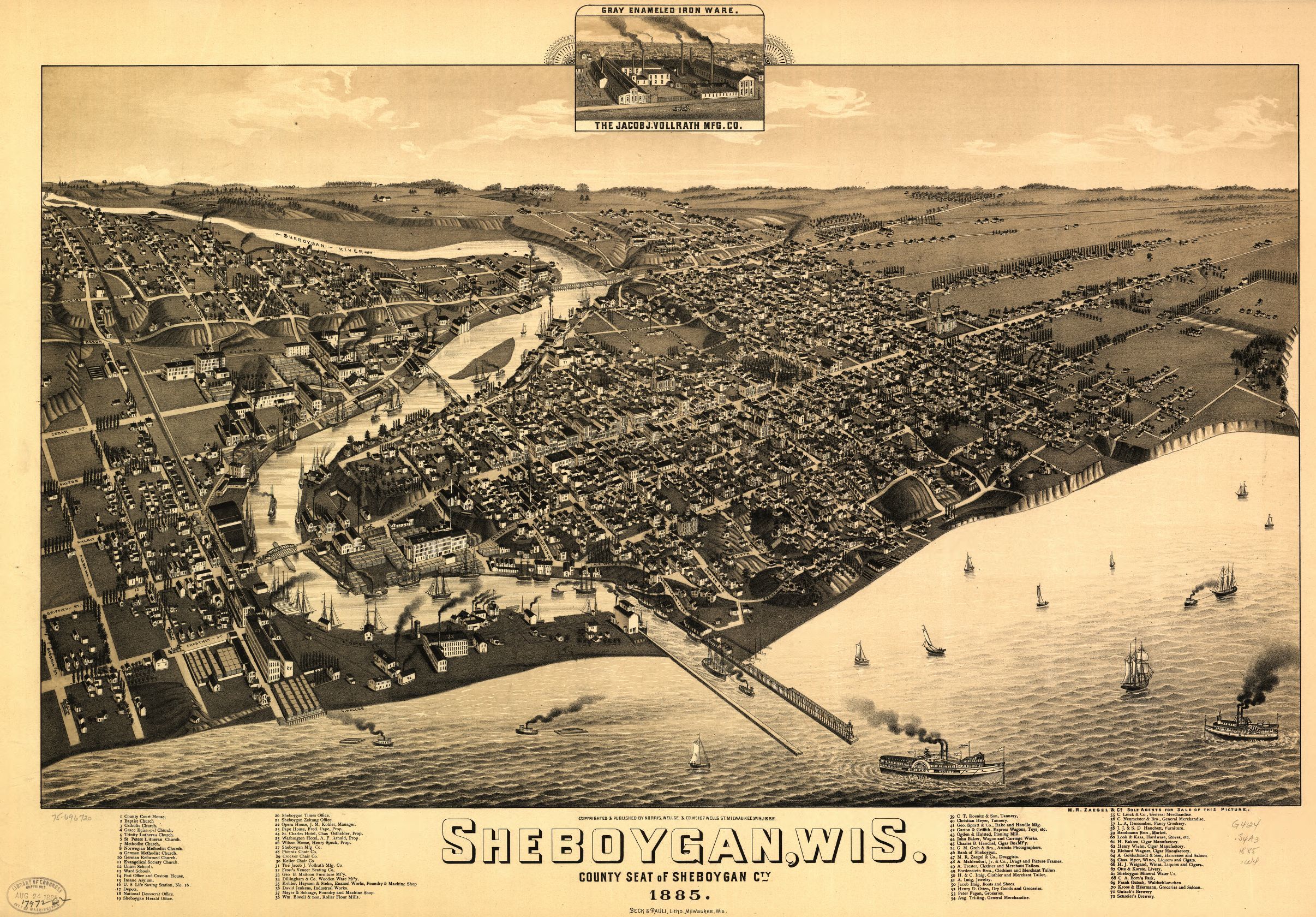 Just fifty-five miles north of Milwaukee and Milwaukee County on Lake Michigan’s western shoreline lie the city (population 49,288 in 2010) and county of Sheboygan (population 115,507 in 2010). The area that was to become Sheboygan County was once covered by a vast forest.

Native American tribes such as the Menominees, Ho-Chunk, Ojibwe, Sacs, Foxes, and Pottawatomi, as well as members of numerous other tribes inhabited the Sheboygan County area.[1] As European exploration of this area began in the early 1600s, France laid claim to what was one day to become Wisconsin.[2] In later years Great Britain and finally the United States claimed the territory that became Wisconsin.

The first European to explore the western shore of Lake Michigan was the Frenchman Jean Nicolet, who traveled through the Sheboygan area in 1635. It is known that he stopped at many Native American villages during his travels; the probability that he stopped at the mouth of the Sheboygan River is quite high. Other European travelers followed Nicolet: Louis Jolliet and Jacques Marquette in 1673, Marquette again in 1674, and Robert de La Salle in 1679.[3] Although the records of their travels and the villages along the western shoreline of Lake Michigan do not make it certain that any of them visited what is now Sheboygan, it is likely that they would have stopped at the large Native American village at the mouth of the Sheboygan River. It is known that Father Jean Francois Buisson de St. Cosme stopped at the mouth of the Sheboygan River, where he encountered a large Potawatomi village and a cross erected by the Reverend Father Pierre Gabriel Marest, who had wintered over at this site with a group of French fur trappers some time previously.

There is little activity recorded in this location until the summer of 1818. William Farnsworth, Ramsay Crooks (a representative of the American Fur Company), three passengers, and seventeen other voyageurs embarked on an 1,800-mile trip in a birch bark canoe from Michilimackinac to St. Louis and back. During the return trip, on July 1, 1818, this group made a stop at the Native American village at the mouth of the Sheboygan River. It was recorded that a very large group of the village residents met them at the shoreline. Shortly after his visit to the native village, Farnsworth decided to open a trading post some three miles up the Sheboygan River near the first rapids. This he did not accomplish until 1820. This was also the site of the first permanent migrant home in the county.[4]

By 1836 settlers had begun to build homes along the Sheboygan River, and the village of Sheboygan began to grow. By the end of 1836, more than a dozen buildings were erected in what was to become the City of Sheboygan.[5] Speculators believed that the tiny village was about to become a “boom town.” They bought up land hoping to make large profits; however, when the financial panic of 1837 struck, the market for land sales collapsed. Residents abandoned the future site of the city. It was reported that two of them loaded their homes on barges and towed them to Milwaukee. For a time, the population of Sheboygan was reduced to only one family. In Sheboygan County, farmers from the New England states and a few from Europe, mainly from Germany and Holland, struggled to maintain their farms. But by the latter part of the 1840s economic conditions improved, and immigration to Sheboygan picked up markedly.

Agents from the American Midwest extolled the benefits of settlement in Sheboygan. They made extravagant claims of rich soil, cheap land, abundant rainfall, short mild winters, and above all freedom of religion. A religious reform movement was sweeping across Europe among Protestants, particularly in Germany and Holland. Immigrants came by the thousands. After landing in New York, many traveled to Buffalo, where they boarded a lake steamer to carry them through the Great Lakes to ports such as Chicago, Milwaukee, and Sheboygan. In November of 1847 one group of Dutch immigrants, approximately 250 in number, set out for Sheboygan on the brand new lake steamer Phoenix. After thousands of miles of travel, their journey came to a tragic end when just several miles short of their destination, the Phoenix caught fire. Approximately two hundred died in the cold November waters of Lake Michigan and the roaring inferno.[6]

As the newcomers (mostly German and Dutch farmers) flooded into Sheboygan County in the nineteenth century, new small towns sprang up. Many farmers, most of them of German extraction, turned to dairy farming and founded the Wisconsin cheese industry. Beginning in the 1860s, Sheboygan grew rapidly. Some boosters predicted that Sheboygan would be larger than Milwaukee or Chicago. Other cities were established in the area. Riverside, just a few miles west of Sheboygan, became Kohler. A few miles west of that, Rochester became the thriving city of Sheboygan Falls (population 7,775 in 2010) and twelve miles west of Sheboygan the city of Plymouth (population 8,445 in 2010) grew into what some people feel is the cheese center of the world.

Sheboygan was home to vibrant maritime industries. From the early 1600s, when the first birch bark canoe of French fur trappers entered the future harbor, it was recognized that the mouth of the Sheboygan River had great potential as a port. At its mouth, the Sheboygan River was both wide and deep. However, at the very point where it entered Lake Michigan, the river made a sharp bend that caused a sand bar to form, preventing all but the smallest ships from entering the harbor. About 1840 a cut was made through this bend to create a straight approach into the harbor, opening it to ships of all sizes. By 1860 the Sheboygan harbor was the center of commerce for the rapidly growing city. With heavily forested lands close by, shipbuilding flourished. Over two hundred ships were built in Sheboygan by seven different shipyards. Milwaukee’s first fire boat was built there. With the abundance of fish in Lake Michigan, commercial fishing grew rapidly in the nineteenth century. The first product shipped out of Sheboygan in the late 1830s was several barrels of smoked fish. Many of the early fishermen were of Nordic extraction.

Of all the industries that were established in Sheboygan, none was larger than the furniture industry, which today has nearly disappeared.[7] The Harbor Master recorded goods that were shipped into Sheboygan and goods that were shipped out. The report for 1888 indicated that close to 900,000 pieces of furniture were shipped out of the city. In the 1880s, close to 65% of the city’s workforce was employed in a wood-related job. By the late 1960s most of these jobs were gone; many of them moved to Southern states, where labor was cheaper and wood more plentiful.

Sheboygan was also known for the high quality leather goods it produced. Several large firms produced shoes, boots, and leather clothing such as jackets, gloves and hats. During World War II, many American soldiers stomped into combat wearing boots made in Sheboygan. Several other companies produced stainless steel and enamel ware for domestic hospital and commercial use. Plymouth’s cheese industry contributed tons of cheese to the war effort.[8] Other Sheboygan County factories produced items such as stainless steel mess kits, canteens, shells, airplane engine parts, generators, and clothing.[9] Furniture companies converted their factories to build wooden glider parts and desks and chairs for the military. A tiny local broom company with just a handful of employees filled a large order for thousands of brooms for the U.S. Navy.

Of all of Sheboygan’s industries, none grew larger or became more world famous than the huge Kohler Company, which was founded in 1873 by John Michael Kohler II, an Austrian immigrant.[10] Kohler plumbing is known around the world for its high quality and innovative design. The company has a long history of difficult labor relations at the main plant. Strikes occurred at the plant in 1934, 1954, 1983, and 2015.[11] Kohler today employs over 2,200 workers at the Kohler plant, just west of Sheboygan in the Village of Kohler (population 2,120 in 2010). Members of the Kohler family have been instrumental in the growth of the county. They have constructed several world class golf courses, which have recently hosted highly rated PGA golf tournaments.[12]

In the twentieth century, immigrants from other parts of the world enhanced Sheboygan’s ethnic diversity. Residents of Greek extraction hold an annual, well attended Greek Fest in Sheboygan.[13] Since the Vietnam War many Hmong people have chosen Sheboygan as their home. Local groups sponsored more than 6,000 Hmong people, who were resettled from camps in Laos. The new residents added new foods and other cultural elements to the city, which has the fourteenth largest Hmong population in the United States.[14] 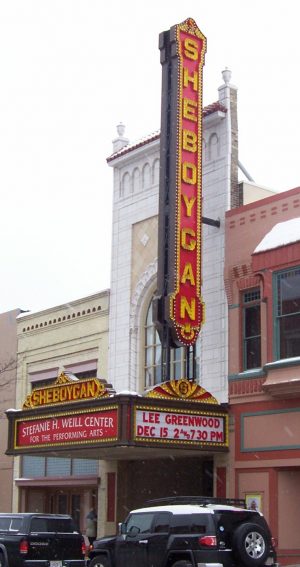 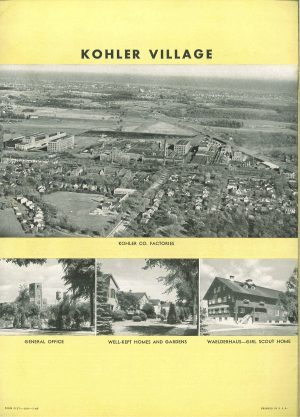 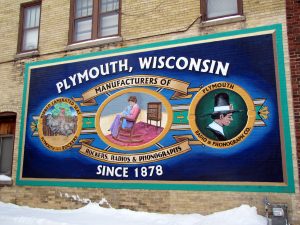 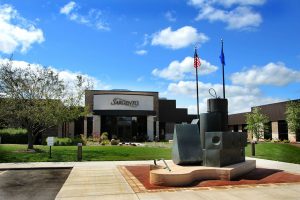