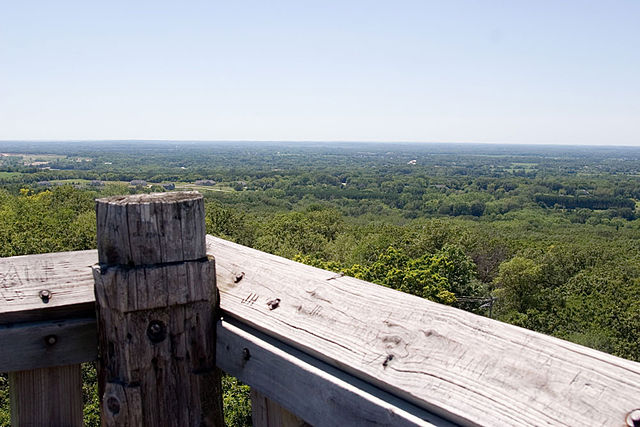 The greater Kettle Moraine stretches from Kewanee County south through Walworth County. It was created when the Green Bay and Lake Michigan “lobes” of the Wisconsin Glacier (it had six lobes all together) retreated some 10,000 years ago. The retreating glacier left behind geological indentations, known as kettles, and deposited debris—silt, rocks, and boulders—that produced topographical accumulations called moraines. The kettles later became bodies of water varying in size from large puddles to lakes.[1] Portions of this area became Kettle Moraine State Forest, one of Wisconsin’s most popular outdoor attractions.[2] The Northern Kettle Interlobate Moraine is also one of the world’s best examples of this type of glacial land formation. Some notable features in Kettle Moraine, recognized by shape, include “eskers,” or level-topped ridges, “kames,” which are conical hills created by water movement, and “drumlins,” which one source describes as “teardrop-shaped hill[s].”[3]

Prior to the arrival of Europeans, bands of Indians roved the area. Significant change occurred in the eighteenth and nineteenth centuries when European settlers cleared more than half of the Kettle Moraine for farming. In 1937, the state legislature created the Kettle Moraine State Forest.[4] This legislation sought to counterbalance the urban population growth and provide space for recreation.[5] Lawmakers created two large partitions, a northern unit (30,000 acres) in Washington, Fond du Lac, and Sheboygan counties, and a southern unit (22,000 acres) that covered parts of Waukesha, Walworth, and Jefferson counties.[6] Both units offer snowmobiling, along with silent sports such as skiing, hiking, biking, and snowshoeing.[7] The southern unit also features the Scuppernong River Habitat Area, the largest wet prairie east of the Mississippi and the popular Paradise Springs.[8] Visitors to the latter witness water flowing from the spring (once owned by a salt baron, among other former, private owners) at a rate of five-hundred gallons per minute.[9] Three smaller units round out the park system. Lapham Peak, near Delafield, features a lighted ski trail, while Pike and Loew lakes offer camping facilities and canoeing.[10] All five units are linked by two trails: the 115-mile Kettle Moraine Scenic Drive for cars and, for hikers, the Ice Age National Scenic Trail.[11] The parks have proven popular with Wisconsinites and out-of-state visitors. In the late 1960s, more than half a million people visited the northern unit annually while over 300,000 visited the southern sections each year. By 2013, the number of annual visitors had ballooned to over two million.[12]

Visitors have also come to the state forest in search of the supernatural. Since 1991, UFO seekers have met at Benson’s Hide-A-Way, a UFO-themed bar and restaurant in Dundee.[13] The annual July gathering, known as “UFO Daze,” provides a forum for UFO enthusiasts to exchange stories.[14] Bill Benson and others report sightings of glowing spaceships, flying spheres, and illuminated objects in the sky.[15] Dating to at least the 1980s, Benson and others have claimed Dundee Mountain, which is really a kame, is the best spot to see a flying saucer.[16]