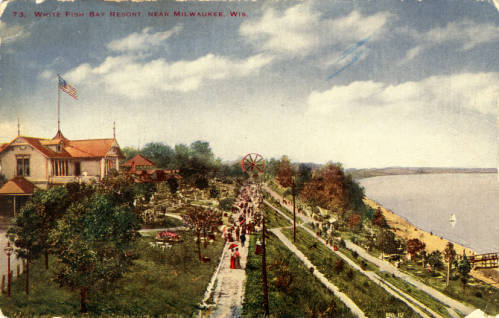 The Village of Whitefish Bay is located about five miles north of downtown Milwaukee on the bluffs above Lake Michigan. It is primarily residential, with a retail shopping area along Silver Spring Drive. When settlers began moving into the area in the mid-nineteenth century, the area was much different. Like other early Milwaukee settlements, it was a mostly rural farming community with a significant population of German-born immigrants. These early residents cultivated and sold produce to meet the needs of the growing city of Milwaukee. A few enterprising settlers also set up a commercial fishing operation in the adjacent bay of Lake Michigan. The frequency with which they caught whitefish there suggested a name for the community.

Whitefish Bay’s incorporation as Milwaukee County’s first village resulted from residents’ desire to send their children to school close to home. Before the village incorporated on May 10, 1892, the only available school was several miles distant. Parents asked for a nearby school, but the Town of Milwaukee declined their petition. George Rogers, who published the Whitefish Bay Pioneer, initiated a campaign for a village charter to permit formation of a local school district to serve the area’s growing population. An official census demonstrated that over three hundred people lived in the area and met the requirements of Wisconsin law. The new village president, Fred Isenring, immediately appointed a school committee.[1]

Also in the late nineteenth century, the community became a leisure destination for Milwaukeeans seeking to escape from the city’s noise, heat, and pollution. Captain Frederick Pabst of brewing fame acquired land in Whitefish Bay for a grand beer garden, hotel, and amusement park. Steam-powered boats made regular trips from Milwaukee to the resort’s dock below the bluff. A series of switchback paths led up to a hotel (the Bellevue), a restaurant, a band shell, and enough beer to satisfy excursionists’ thirsts. Later, Pabst’s Whitefish Bay Resort added a Ferris wheel and a merry-go-round.[2] The park operated until about 1914. In addition to traveling to the resort via excursion boats, visitors could take the Milwaukee & Whitefish Bay Railway—known locally as the “Dummy Line.”[3]

Visiting the village’s resorts provided the prospective residents with the opportunity to consider Whitefish Bay’s attractions. It was nestled close enough to Milwaukee to allow an easy commute to work. But residents also put an independent stamp on the Whitefish Bay’s character. The village’s population grew tenfold between 1917 and 1936, and then doubled again to a peak of 18,390 in 1960. Since then, its population has stabilized at around 14,000.[4] 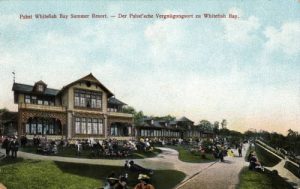