In the United States context, suburbs typically are low-rise, residential municipalities beyond the commercial and industrial cores of central cities, sprinkled as they are with denser, older, multi-family housing stock. In the greater Milwaukee area, the processes and motivations for decades of suburbanization were varied and multifaceted. Some suburbs developed as enclaves of professionals and their families seeking to distance themselves from the city, while others were working-class communities developed around industrial employers. The development of new transportation technologies facilitated the ability of suburbanites to travel from their homes throughout the metropolitan area.

In 1850, Milwaukee’s population was about 20,000. The advent of plank roads, followed soon after by railroads, allowed the city to undergo rapid population expansion; nearly 100,000 people inhabited the city by 1875.[1] This growth in residents was predicated upon an age of industrialization. New arrivals worked in the stockyards and flour mills, brewed beer, tanned leather, packed meat, and manufactured iron products. Consequently, the city developed a rich collection of ethnic neighborhoods, each centered around its own places of worship and homegrown businesses. By 1890, the electric streetcar opened up properties toward the edges of the city as well as in adjoining townships. Middle class families used the relatively low fares charged by streetcar lines to move to bedroom communities filled with single-family homes and sizable yards, from which men commuted to their jobs downtown.

These pastoral suburbs had abundant land that was more affordable than properties in the city. The same premise held true for manufacturers who were anxious to develop larger and larger industrial production sites. Much of this available land was occupied by farms. Between 1892 and 1906, the first true wave of suburbs were incorporated in Milwaukee County. These included communities known for heavy machinery (West Allis), residences (Whitefish Bay and Shorewood), as well as meatpacking (Cudahy).[2] By 1910, these suburbs had a combined population of approximately 24,000 residents, comprising 7 percent of the county’s total.[3] The construction of new roads and streetcar lines made it easier to commute from the suburbs to job sites scattered about the city and county. American popular culture promoted the ideal of suburbia as a retreat from the stresses of city life. Even Milwaukee’s socialists promoted this ideal of workers owning homes marked by well-manicured yards.

A second group of Milwaukee suburbs incorporated in the 1920s. The first was the northern suburb of Fox Point, which was followed four years later by River Hills. These developments epitomized a suburbia that was created for wealthy Americans who could afford more expensive homes and longer commutes. Beginning in the 1950s, a third group of suburbs incorporated. These municipalities included Glendale, St. Francis, Hales Corners, Bayside, Brown Deer, Greenfield, Oak Creek, and Franklin. In 1955, Wisconsin passed the Oak Creek Law, which allowed Milwaukee County suburbs to incorporate rather than being exposed to annexation by the city of Milwaukee.[4] The development of an “Iron Ring” of suburbs around Milwaukee’s borders halted the city’s further growth.

Postwar suburban expansion was triggered in part by a severe housing shortage immediately following World War II. In response, government officials offered real estate developers financial incentives for a new phase of residential development. The 1944 Servicemen’s Readjustment Act underwrote mortgages for single-family homes for veterans. Developers bulldozed thousands of acres of farmland and in their place erected homogeneous subdivisions, while saving prime real estate near state highways and later freeways for service stations, fast food restaurants, and hotel chains. In effect, the federal government provided an incentive for disproportionate numbers of white and middle-class citizens to move to suburbs, both in and outside of central cities.

Some of Milwaukee’s growth during these years can be attributed to the annexation of lands from neighboring townships. But residents of incorporated areas who saw advantages to the city’s economies of scale could vote to consolidate with Milwaukee. Annexation meant that residents could receive a variety of city services from Milwaukee, including fire and police protection, water and sewer systems, garbage and snow removal, public schools, parks, and libraries, and road and sidewalk construction. But some communities fought against the possibility of annexation because they wanted to maintain political independence and local control. Nonetheless, from 1948 to 1956, Milwaukee annexed nearly 300 parcels of land totaling more than 26,000 acres.[5] Many of these areas, especially in the former Town of Granville, were developed into suburban neighborhoods. The population of Milwaukee in 1960 peaked at an all-time high of more than 741,000.

During the ensuing Cold War, Congress passed the Interstate Highway Act, which paved more than 40,000 miles of new highways, including Interstates 43 and 94. The federal government provided 90 percent of the costs. Advocates for this law were quick to point out that the new interstates would play a vital role in the national defense in case of a nuclear attack because they allowed for increased mobility. Since Milwaukee was a prime military target, a person’s chances for survival were better in the outlying suburbs. The construction of freeways during the 1960s into adjacent Ozaukee, Washington, and Waukesha counties opened up vast areas for residential development, but were also responsible for rapid change in Milwaukee’s inner city. The construction of freeways that facilitated commutation between Milwaukee and the adjoining counties led to over 14,000 dwelling units in the city’s African American community being bulldozed.[6] As historian Frederick Olson noted, the ease of commuting out of the city resulted in the population of Milwaukee County increasing three times faster than that of the city.[7] After Interstates 43 and 94 were finished, suburbanization accelerated.

As can be seen, people moved to Milwaukee’s suburbs for a variety of reasons. Less traffic and more natural spaces provided a better quality of life. For entrepreneurs, suburban municipalities offered tax breaks, specialized zoning, and regulatory incentives to attract commerce. Some suburbanites wanted new houses with large yards and believed they were a safer place to reside. But others were concerned about declining property values and the diminished quality of education in the city and were less willing to live near a growing population of African Americans.[8]

Typically, suburbs offered little in the way of inexpensive housing and public transportation. As people moved to the “crabgrass frontier,” the taxpayers who remained in Milwaukee dealt with extreme segregation and increasing concentrations of poverty. The growth of suburbs outside of the city reduced Milwaukee’s business and residential tax base, exacerbated crime, deteriorated the public school system, increased the number of foreclosed lots, and provided an incentive for manufacturing firms to move their operations out of the city. Despite the vast differences between the city and suburbs, residents who commuted to and from the outlying counties remain inextricably linked to the people who called Milwaukee their home. 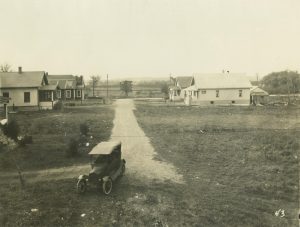 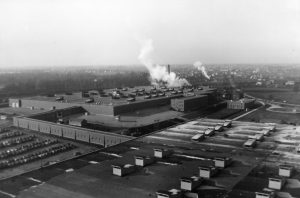 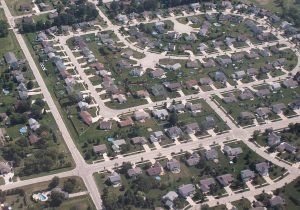 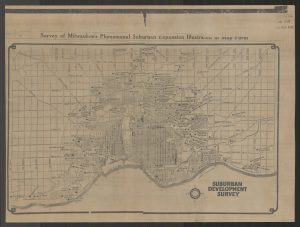