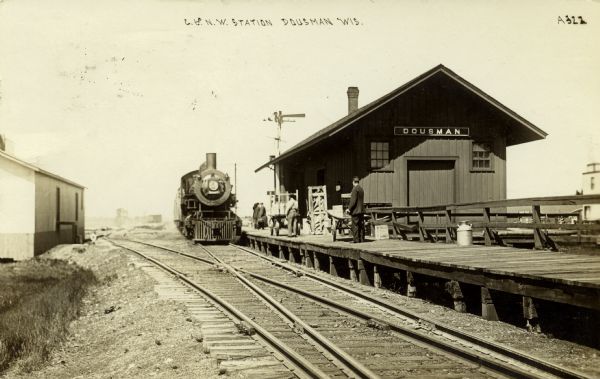 Dousman is a small village located about 35 miles west of Milwaukee in Waukesha County’s “Lake Country.” It was named after Talbot C. Dousman, a prominent local politician who settled there in in the mid-1830s. Historically a popular location for summer visitors to the Lake Country, Dousman was the most important community center in the towns of Summit and Ottawa in the 19th and early 20th centuries.[1] It is distinctive in the 21st century because it consists of three non-contiguous sections.

Many of the region’s smaller lakes, ponds, and streams are located in and around Dousman. The 70-mile Bark River passes through the village’s north side.[2] Surrounding these waters, Dousman also houses abundant wetlands.[3] When the Chicago and North Western Railway built a station in the village in the 1880s, its marshy landscape suggested the nickname “Bullfrog Station.” The nickname lives on today in the village mascot. The annual Derby Days festival, a celebration that began in 1955, includes rides, games, a parade, and a Frog Jump contest.[4]

By 2010, Dousman was made up of three disconnected sections, surrounded by the Village of Summit and Town of Ottawa. Its unusual borders are due to boundary agreements with those neighboring municipalities. Summit, as part of a petition for incorporation, agreed to transfer several hundred acres to Dousman.[5] Ottawa, on the other hand, opted to allocate 2,417 acres over time to Dousman in exchange for relinquishing the village’s right to any future annexation.[6] Since 1990, the village’s land area has already increased by 142%, and as part of the boundary agreements should increase nearly that much again by 2048.[7] Similarly, the village saw its largest population growth between 2000 and 2010 as it expanded its borders, rising from 1,584 to 2,302.[8]

Dousman’s housing options are among the most diverse of any municipality in Waukesha County, where most of the population lives in owner-occupied, single-family homes. As of 2012, around 38% of Dousman’s housing consisted of multi-family units; the same percentage of homes in Dousman were renter-occupied.[9] Housing prices are also wide-ranging, with several affordable housing developments, as well as a median home value far below the rest of the county.[10]

Residents have access to abundant recreational opportunities, with parks and trails, as well as fishing and other water activities on the lakes and ponds. Dousman’s main public park, Cory Park, provides 12 acres of recreational space; the 52-mile Glacial Drumlin Trail runs through the village. The village has a growing downtown business district. It plans to increase larger-scale commercial growth in the village’s business park in the northeast, so as not to detract from the center.[11] 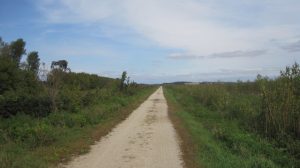