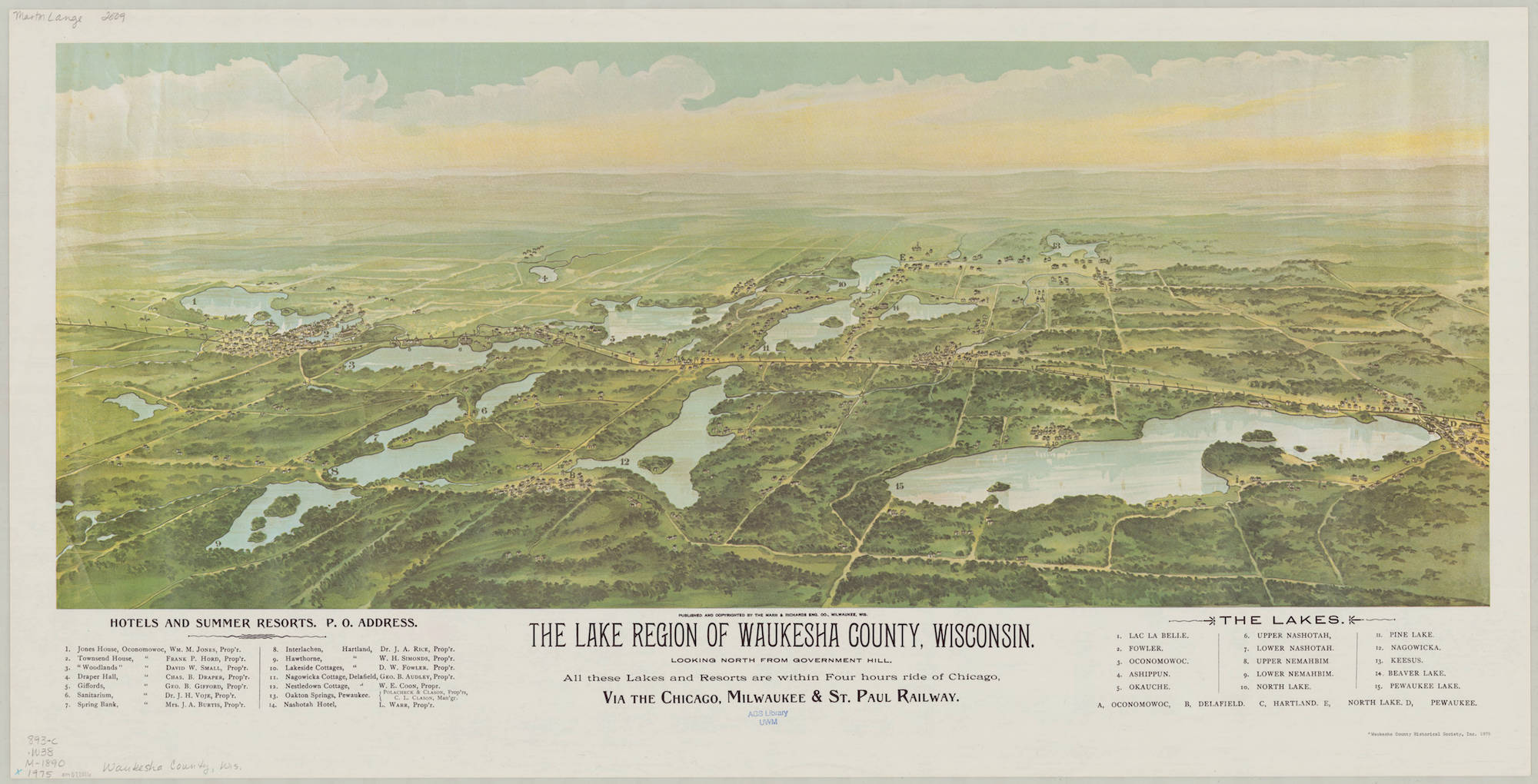 An informal name, northwestern Waukesha County’s Lake Country encompasses over twenty lakes and their surrounding region.[1] These lakes vary in size and depth from large, named lakes, like Pewaukee, Oconomowoc, and Okauchee Lakes, to small ponds. Located within easy traveling distance of both Milwaukee and Chicago, Lake Country became a popular summer destination for wealthy city dwellers in the late nineteenth century. Although Lake Country today is populated by year-round residents, it retains a reputation for comfortable residences and recreational amenities.

The railroad sparked Lake Country’s early growth. In 1855, the Milwaukee and Watertown Railroad Company (later part of the Chicago, Milwaukee, and St. Paul Railroad) expanded through Waukesha County.[2] Lake Country was now easily accessible to wealthy visitors from Milwaukee and Chicago. Resorts and hotels began to dot Waukesha County’s lakes. Included in this early boom were Oconomowoc Lake’s Gifford Hotel (1875), Fowler Lake’s Townsend House (1870), and Draper Hall (1869).[3] The Lake Country area soon rivaled Lake Geneva as a summer getaway.[4] By the 1890s, millionaires were abandoning the resorts and building their own summer residences.[5] The lakes near Oconomowoc—Lac La Belle, Oconomowoc Lake, and Fowler Lake—were especially attractive to the Chicago and Milwaukee elite.[6] The area’s summer residents included the families of Chicago business titans Montgomery Ward and Philip Armour, as well as Milwaukee’s Increase Lapham and the sons of Frederick Pabst.[7]

These summer residents sought diversions and services, which the lakes provided. The hotels and resorts hosted balls and facilitated the creation of yacht clubs.[8] By 1912, yacht clubs existed on Lac La Belle, Oconomowoc Lake, Pewaukee Lake, Pine Lake, and Okauchee Lake.[9] In addition to summer races, many of these clubs held ice sailing competitions in the winter.[10] Through the years, Lake Country has also hosted golf courses, summer camps, and religious seminaries.[11]

Rail transportation remained important as the region changed in the early twentieth century. From the 1890s, daily commuter trains allowed businessmen to work in Milwaukee and return to their lake homes each evening. Until it was discontinued in the 1920s, executives could pay an annual fee for access to the Nashotah Club Car, an exclusive train car on the Milwaukee Road.[12] Although commuter trains continued to run into the 1970s, automobiles began to render the trains obsolete.[13] The combinations of wars, economic downturns, and generational change put an end to the era of Lake Country’s mansions. By the 1920s, many of Lake Country’s hotels closed and many of its grand estates were divided.[14]

Longstanding modest settlements in Lake Country expanded in the twentieth century. Pine Lake residents created an owners’ group to prevent the commercialization of their lake.[15] Okauchee Lake and Pewaukee Lake welcomed modern housing and subdivisions.[16] Although it is no longer the resort destination it was in the nineteenth century, Lake Country continues to provide a variety of lake recreation opportunities, including public-access lakes, public beaches, and private lakes.[17]