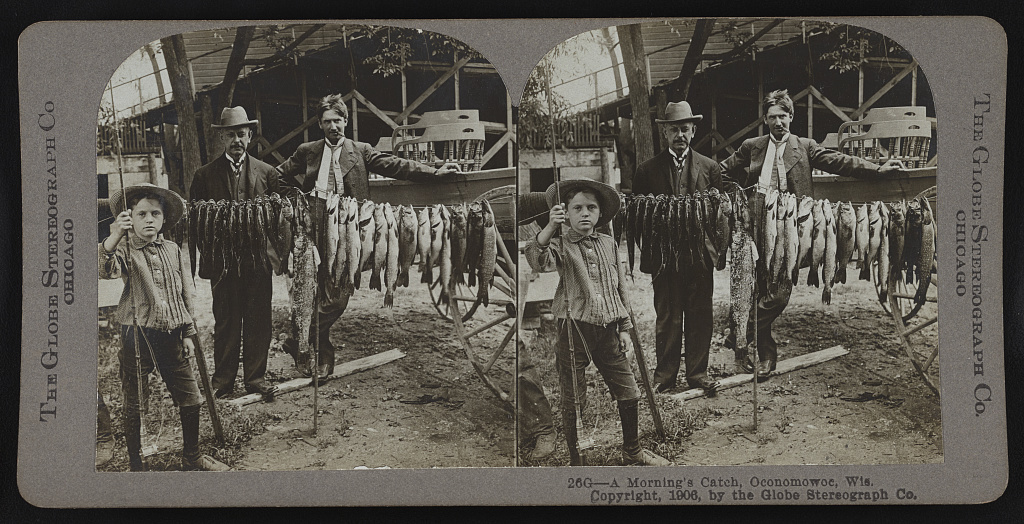 Humans have fished Milwaukee area lakes and rivers for centuries. Natives, fur traders, and early settlers subsisted in part on the fish they caught in these waters. While the commercial fishing industry reduced the need for Milwaukeeans to fish for their survival by the 1860s, many residents continued the practice to maintain a connection to nature, hone new and traditional techniques, and relax.[1] Like other such outdoor pursuits, fishing developed into a popular recreational activity through the late nineteenth and twentieth centuries as leisure time became increasingly separated from work time. Increased industrial wages and vacation benefits also allowed workers to buy gear and take time off for fishing trips.

Recreational (sport) fishing took many forms. Milwaukee men and women fished on area lakes and rivers for pleasure (hobby) or competition; with artificial lures, live bait, flies, or spears; alone or in teams. They fished in boats, or from shore, bridges, and piers, or even while wading in the water. Some anglers braved cold weather to fish through holes they drilled in the ice. Native Americans have spear-fished through the ice of Wisconsin lakes and rivers in winter seasons since well before European settlement. Early pioneers picked up the practice to supplement their winter diet. Ice fishing largely followed the recreational development of warm-weather fishing—gaining popularity with increased leisure time and money. It has particularly boomed since the mid-twentieth century with improvements in heating technology, cold weather clothing, automotive and snowmobile transportation, and other amenities. Ice fishing shanties remain a common sight on the Milwaukee area’s inland lakes in the winter.[2]

Sport anglers also maintained various levels of commitment. Avid anglers spent considerable time and money on mastering fishing techniques, studying fish habits and area aquatic ecosystems, and acquiring the latest gear to catch trophy fish. The less devout used fishing as a means to enjoy nature, socialize, and drink beer on a nice day—perhaps not catching anything at all.[3]

Area rivers and connecting waterways were popular fishing spots, as well. One pioneer recalled that Horace Chase and other early Milwaukeeans caught “great numbers” of fish from a brook that flowed from the current intersection of Second and Mineral Streets to a meadow west of Muskego Road.[6] Gregory notes, “There was excellent fishing in the Milwaukee River till [sic] the pollution of the water following the construction of sewers and the introduction of plumbing into the houses of the city [in the 1870s],” after which anglers moved to cleaner waters north of the North Avenue dam.[7]

A growing recreational fishing industry accompanied these conservation efforts in the mid-to-late twentieth century. Rural communities cultivated tourist and entertainment economies as new infrastructure drew more leisure seekers into Milwaukee’s hinterlands. Resorts and bait shops popped up around Pewaukee Lake in Waukesha County, Cedar Lake in Washington County, and other Milwaukee area lakes. North Woods resorts promised visiting anglers “a real sportsman’s paradise, in the uncrowded country filled with myriads of clear, cool lakes and rivers as nature made them.” Both Up North and in the Milwaukee area, local guides offered fishing charters to tourists unfamiliar with the waterways.[11]

The increased popularity of recreational fishing inspired new venues for sharing a passion for fishing through the twentieth century. “Rod and gun” clubs have long been part of Milwaukee’s social history. Once such club, the Minne Ha Ha Fishing Club—presumably named after the character in Henry Wadsworth Longfellow’s The Song of Hiawatha—registered as a corporation in Milwaukee in 1904.[12] Many other Milwaukee area clubs have emerged since the boom in Great Lakes sport fishing in the 1960s. These groups offered members a community to share their passion for the sport, exchange knowledge, organize fishing excursions and tournaments, and promote conservation and safety.[13] Anglers also found fishing information through a variety of media outlets. In the 1910s, the Milwaukee Sentinel published the nationally syndicated “Rod and Reel” column featuring fishing tips, fish stories, and answers to reader-submitted questions.[14] Since the 1940s, the Journal Sentinel Sports Show has exhibited the latest in gear, techniques, and excursions for local outdoor enthusiasts, including anglers.[15] Since the 1960s, local and national fishing television programs, like The Fishing Hole, Bill Dance Outdoors, and Due North Outdoors, showed off effective fishing equipment and practices, as well as promising regional locations. In the twenty-first century, the Wisconsin Department of Natural Resources and other fishing websites offered area anglers live updates on weather and water conditions, as well as information on how many and what kinds of fish have been recently caught.[16]

Although the Milwaukee area’s commercial fishing industry has long since dwindled, Milwaukeeans remain well connected to the fishing traditions of their forebears—not for survival, but for fun.

Shapiro, Aaron. The Lure of the North Woods: Cultivating Tourism in the Upper Midwest. Minneapolis, MN: University of Minnesota Press, 2013. 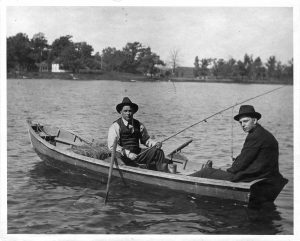