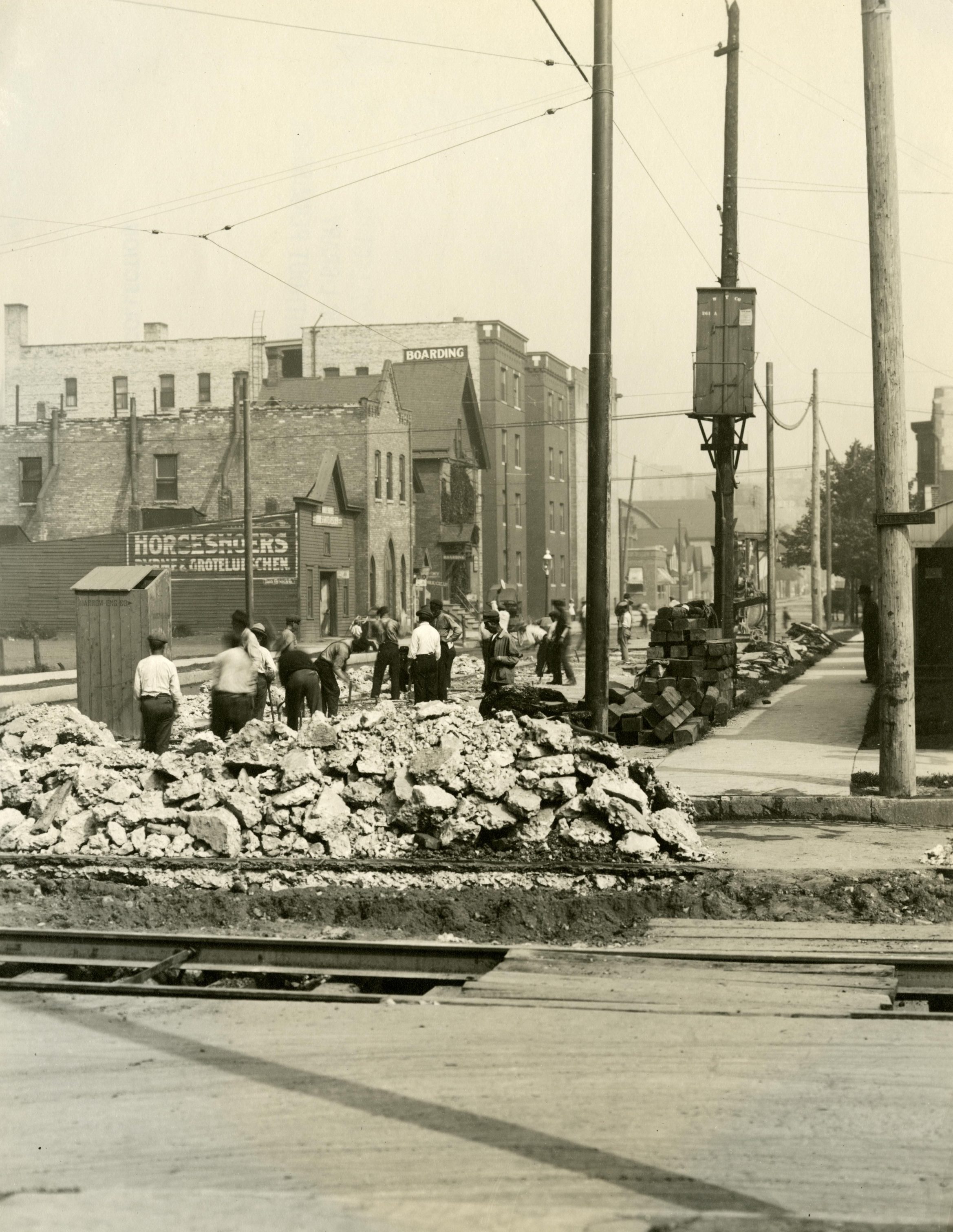 Generally, roads link distant places together, while streets provide access within a community. Before Europeans came to the Milwaukee area, Indian trails served as the way to travel from one place to another. They provided routes between what would later become cities and towns, like Waukesha to Eagle or West Bend to Port Washington. Many led to Milwaukee, from all directions but east. The trails ran on the higher, drier ground where possible; because of obstacles, they took many twists and turns.

Indian trails served as the basis for many of today’s roads. The first road through Milwaukee connected the forts at Chicago and Green Bay. By 1840, soldiers had cut a thirty-three-foot wide dirt route along these trails, through forests and prairies. They filled in low spots with logs or log bridges.[1] Other trails were widened and straightened to make roads that radiated from Milwaukee to Muskego, Pewaukee, West Bend, Cedarburg, and other communities. Dirt roads were often impassible during wet conditions, making it difficult for farmers to bring their products to Milwaukee for local consumption or to be shipped elsewhere from the city’s port.

In 1848 Wisconsin chartered corporations to build plank roads and allowed them to charge a toll for their use, hoping to provide more reliable transportation. The roads were usually built of oak planks, which outlasted softer woods. Eight-foot-long planks, two or more inches thick, laid across two oak rails eight feet apart and four inches square, provided a smooth surface for wagons and, depending on weather conditions, were safe for the animals pulling them. Even oak wore under heavy loads and weather, though. Road maintenance costs drove many plank road companies out of business.

While most plank roads were not successful, the Watertown Plank Road, a name which survives to this day, was a brief exception. Construction of the road began in 1848 and was completed in 1853. It was profitable until 1855, when the railroad from Milwaukee to Watertown was completed. Because the company was unable to compete with the railroad, the owners began abandoning parts of it. By 1861 sections fell under the control of the towns and cities it passed through.[2]

Most defunct plank roads were covered with gravel after the planks decayed. Although travelers disliked gravel because it did not provide a firm surface, it was better than the rural dirt roads used for access to farms and farm communities. New road construction materials, like crushed stone and tar, provided a smoother, firmer surface but were used only on main roads. The 1880s bicycling craze took many people to the roads, but cyclists were unhappy with the rutted, muddy surfaces. Through the national “Good Roads Movement” during the 1880s and 1890s, bicyclists and bicycle organizations began lobbying for better roads.[3] During the following two decades, automobile enthusiasts took the lead, pressing federal, state, and local officials to improve roads. After World War I and through the Great Depression, new and existing roads were improved with better roadbeds and surfaces. The conversion to concrete (often covered with asphalt) gave people in the metropolitan area smooth, modern roads for getting to jobs, schools, shopping, and recreation.

The first streets in Milwaukee-area cities and towns were along the lakes and rivers that provided transportation and the water power for mills. Early streets, which followed the edges of the river banks and lakeshores, allowed access to the waterfronts. The first street in Milwaukee was a footpath along the east side of the Milwaukee River which became Water Street. On June 13, 1836, tree stumps were removed between Michigan and Wisconsin Streets and the first section was graded. Eight oxen pulled the plow as exuberant Milwaukeeans watched their first street coming into focus. They celebrated by consuming thirty baskets of champagne.[4]

Subsequent streets did not parallel the water’s edge. They were generally laid out, regardless of bluffs, marshes, and other obstacles, in the grid pattern found in older sections of towns today. During wet weather, dirt streets were often a quagmire. Eight-foot long wood planking was laid across them for vehicles to ride over. The planking did not last long, particularly on main streets, so other materials were tried. Stone pavers handled heavy traffic, but they were more expensive and could be slippery for horses. A variety of wood pavers was used, sometimes treated or processed to increase longevity. Cedar pavers proved to be the best option, although they only lasted for about six or seven years.

As the twentieth century approached, all of these materials covered the surfaces of Milwaukee’s streets. Under the surface, roadbeds consisted of compacted dirt, sand, gravel, crushed stone, and even wood. In 1893, Charles Pfister put the first asphalt street in the city next to his hotel on Jefferson between Wisconsin and Mason Streets. The asphalt was praised as “perfect, pleasant, durable, noiseless and sanitary.”[5] Others complained that asphalt was more expensive and cedar pavers provided better footing for horses. But there were few horses when the Good Roads Movement moved into high gear in the following decades, and streets dramatically improved. Roadbeds were made deeper and firmer with gravel and crushed stone, then a thick layer of concrete, often surfaced in asphalt.

The use of the grid pattern for streets began to decline with the federal government’s development of Greendale in the 1930s. It had curvilinear streets, with many ending in cul-de-sacs and dead ends. Subsequent subdivision designers adopted this approach to limiting through traffic. Curved streets allowed them to take advantage of the terrain in designing new neighborhoods. Today, there are nearly eight thousand miles of streets and roads in the four-county area.[6] 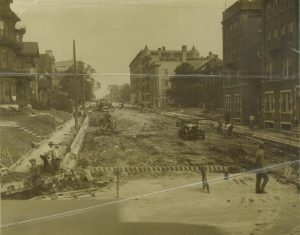 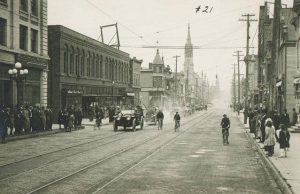 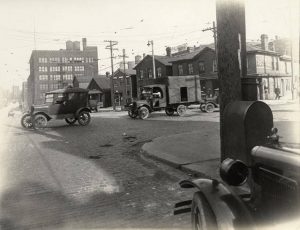 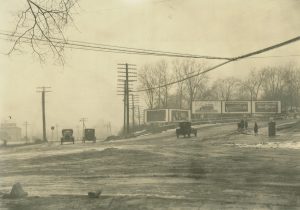