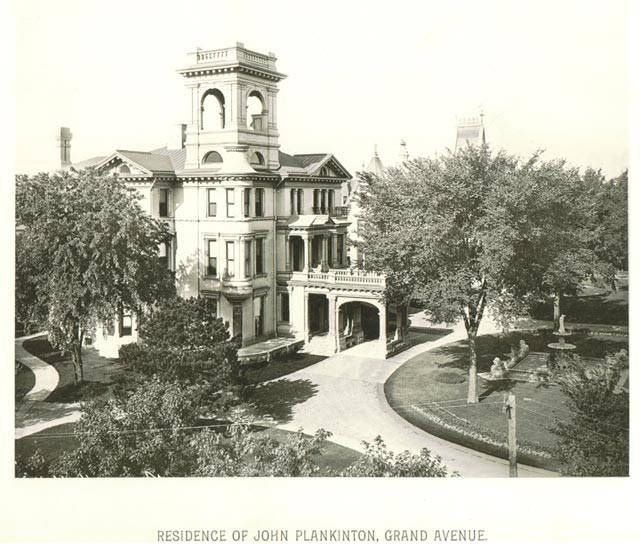 Grand Avenue was an officially designated Milwaukee street from 1876 to 1926.[1] It first developed in the 1850s as Spring Street, where wealthy residents built large estates on the outskirts of the city. Over the successive decades, their mansions emerged as a suburban “gold coast.”[2] By the 1920s, however, that suburban character dissipated as downtown pushed outwards and Milwaukee renamed the street Wisconsin Avenue.[3] Residents moved from Grand Avenue to emerging suburbs such as Wauwatosa and Sherman Park.[4]

In the late 1840s, workers built Spring Street, Grand Avenue’s predecessor, by removing a fifty-foot bluff and using the excess material from the demolition to fill in wetlands.[5]

Milwaukee’s economic elite filled in the void around Spring Street. Railroad magnate and financier Alexander Mitchell built a home on 9th and Spring Street in 1848 and erected a mansion on his great estate by 1876.[6] In 1864 meatpacker John Plankinton purchased an existing mansion on Spring Street between 15th and 16th Streets and remodeled it extensively.[7] Plankinton built two more mansions near his own on land from the original 1864 purchase. The William Plankinton mansion (1876) and the Elizabeth Plankinton mansion (1886) were wedding gifts for his son and daughter, respectively.[8]

So many magnificent homes were built on Spring Street during the 1860s and 1870s that historian John Gurda writes, they “were scattered all the way to 27th Street and beyond.”[9] These elaborate demonstrations of wealth made Spring Street a prime tourist destination.[10] Reflecting its new character, in 1876 the city changed the street’s name from Spring Street to Grand Avenue.[11] Some citizens disparaged the change, sarcastically suggesting it should be “Snobby Avenue.”[12] Yet the new name did not extend across the entire city. Grand Avenue ran west from the Milwaukee River to the western border of the city at 35th Street (then Western Avenue). The section east of the river, through the heart of Juneautown, was Wisconsin Street.[13] Moreover, Grand Avenue had two unofficial sections, the “west side,” from 8th Street to 27th Street, and the “West End,” from 27th Street to 35th Street.[14] While the buildings were equal in extravagance, the West End was particularly rural. W.W. Coleman wrote in the 1877 pamphlet, Milwaukee Illustrated, that the west end seemed to be “one immense and elegant park.”[15]

In the early twentieth century, this elegant park urbanized as Milwaukee’s downtown development expanded westward.[16] In 1907, the first apartment building appeared on Grand Avenue.[17] 27th Street, already a streetcar route, emerged as a commercial thoroughfare around which further development occurred.[18] For example, the Concordia neighborhood, just north of Grand Avenue, increased in population by fifty percent between 1920 and 1930.[19] With many of Grand Avenue’s original home builders deceased, their children moved out to newer suburbs.[20] In 1926, the City of Milwaukee decided to consolidate Grand Avenue and Wisconsin Street under one title, Wisconsin Avenue.[21] Very few remnants of Grand Avenue remain visible today. The Frederick Pabst mansion has been restored as a museum, and the Alexander Mitchell mansion is home to the Wisconsin Club. Over time, the other mansions were demolished and replaced. One of the last demolitions was the Elizabeth Plankinton mansion, which was torn down in 1980 and replaced by Marquette University’s Alumni Memorial Union.[22] 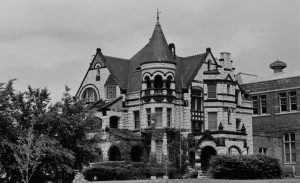 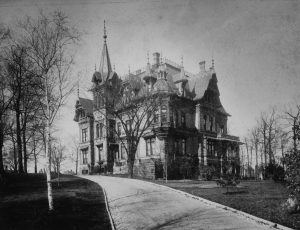 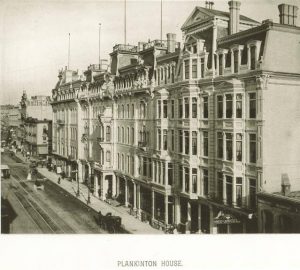 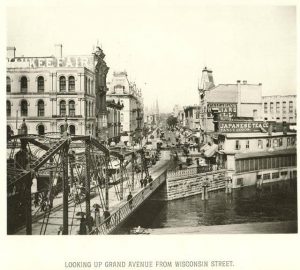 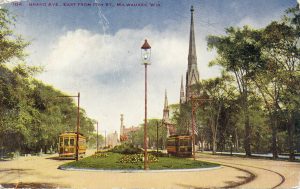 When I began researching Grand Avenue, my first stop, of course, was the Golda Meir Library at the University of Wisconsin-Milwaukee. From previous experience, I knew the stacks section around the call number F589 had shelves full of books on the history of Milwaukee. So I went up to the third floor of the west wing in search of anything even vaguely related to my topic. Scanning through the pile of literature I amassed, I was frankly a little disappointed. There were some descriptions and sparse facts, but nothing I read gave me the full understanding necessary for writing. Then I came across The West End by John Gurda. In it, Gurda explains the history of the Concordia, Merrill Park, and Pigsville neighborhoods. Grand Avenue ran through, or nearby, each of these neighborhoods and played a role in their development. Therefore Gurda provided me with a clean, cohesive, and well-researched narrative of my topic. After I read The West End, I felt I understood Grand Avenue. Suddenly my other sources made sense because Gurda provided me with the overarching story of Grand Avenue.[1]

Thus, I started typing. However, I soon discovered a possible problem. I frequently depended on John Gurda—perhaps too frequently. When I had a question or I was not sure about the sequence of events, I picked up one of his books. It made sense. My job was to write a factual entry and he had done the research and written the best and most cohesive narrative on Grand Avenue. Still, I reflected on my usage of his work. Was I, in some form, plagiarizing through my dependence on his narrative?

I had other sources, but these writings provided auxiliary information rather than tell a story. For example, in Milwaukee Streets: The Stories behind Their Names, Carl Baehr offers a succinct history of Grand Avenue. From it, I learned the specific dates Spring Street became Grand Avenue and Grand Avenue became Wisconsin Avenue. I learned Grand Avenue stopped at the Milwaukee River.[2] Yet, these facts, important as they are, are not a story. Gurda told helped me see Grand Avenue, helped me understand what it was. My goal was to show Grand Avenue, and I used Gurda because he is the one who opened my eyes to it.