The City of Pewaukee is located approximately seventeen miles west of Milwaukee in Waukesha County. It surrounds the independently governed Village of Pewaukee, which in 1876 voted to separate from the Town of Pewaukee (initially established by the Wisconsin Territorial Legislature in 1840).[1] Self-promoted as “The City in the Country,” the sprawling City of Pewaukee finally incorporated from what remained of the Town in 1999, following ten unsuccessful attempts.[2] Residents had begun lobbying to incorporate thirty-five years prior, in response to annexation efforts by the Village of Pewaukee and its southern neighbor, the City of Waukesha.[3] Although Pewaukee successfully voted on incorporation in 1984, the Wisconsin State Supreme Court invalidated the referendum in 1986 because the new “fourth-class” city did not border a “first-class” city.[4] The court based its ruling on Pewaukee’s use of the controversial 1955 Oak Creek Law, which precluded the City of Milwaukee from seizing land in neighboring towns.[5]

An increasingly urban municipality, Pewaukee experienced its highest levels of population and economic growth during the second half of the twentieth century. In this period, new home construction and subdivision expansion accelerated along the I-94 corridor and the city’s main thoroughfares of Capitol Drive and Pewaukee Road.[6] The development of open lands off I-94 in the 1970s and 1980s attracted computer technology, retail, and utility firms like Quad/Graphics (1971), Wisconsin Bell (1984), Roundy’s (1985), and Wisconsin Electric (1986).[7] In addition, the hydraulics controls and construction equipment manufacturer Husco International has employed hundreds of Pewaukee workers since the mid-1980s.[8] Although manufacturing continues to represent a large portion of total employment for the city’s residents, a majority has worked in service-sector occupations—healthcare, education, retail, and finance—since Pewaukee incorporated.[9] Nonetheless, such residential and commercial growth has reinforced Pewaukee’s reputation as a producer in Waukesha County’s industrial sector.

Throughout the 2000s, the Pewaukee Common Council and the Pewaukee Village Board continued a decades-long conversation about municipal consolidation. While they came close to combining in 2002, concerns raised by the City of Pewaukee over property tax increases prevented a full merger.[10] City of Pewaukee residents have long touted their community as a desirable place to live based on its low property tax assessments.[11]

As of 2013, the village and city shared some public services, including a Parks and Recreation Department, emergency medical services, a fire department, a library, and building inspection services.[12] The City of Pewaukee closed its police department in 2010 for budgetary reasons, opting to contract with the Waukesha County Sheriff’s Department instead.[13]

As of 2010, more than 13,000 people lived in the growing City of Pewaukee, up from 11,783 in 2000, and the preceding Town’s populations of 9,339 in 1990 and 8,922 in 1980.[14] More than forty percent of Pewaukee residents were of German ancestry 2010, with significant numbers also claiming Irish, Polish, English, and Italian roots.[15] Communal worship has united the middle to upper middle-class population since the mid-nineteenth century and, in 2016, the City of Pewaukee featured twelve houses of worship, including Lutheran, Evangelical, Catholic, Methodist, Congregational, and Episcopal churches and a Hindu temple.[16] 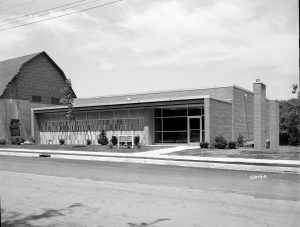