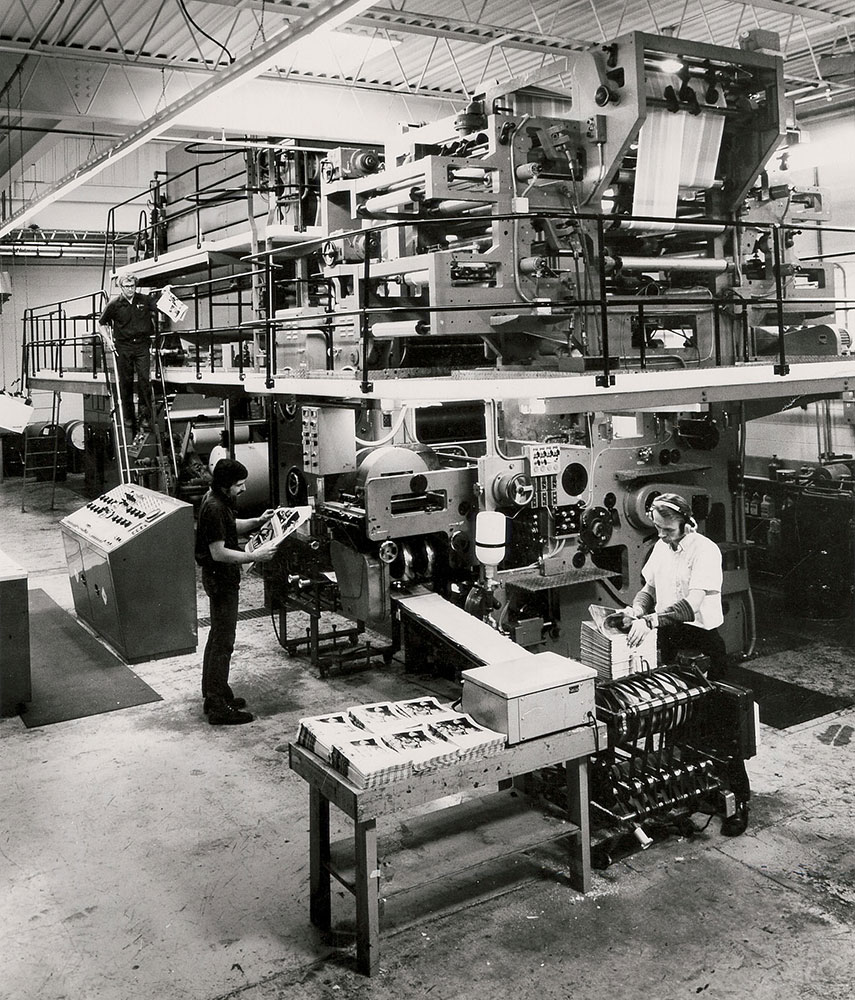 Headquartered in Sussex, Quad/Graphics is an international printing giant, focused primarily on magazine and catalogue printing, with multiple plants in the Milwaukee area. Operating from 1971 to the present, Quad/Graphics was a relatively late-bloomer in Milwaukee’s printing industry but became a national industry leader in the late-twentieth century.

After graduating from Columbia Law School, Harry V. Quadracci followed his father, Harry R. Quadracci, into the printing business. The senior Quadracci was a founding partner of the Milwaukee-based W.A. Krueger Printing Company in the 1930s. By the mid-1960s, his son had become a key executive at the same firm as well.[1] After a particularly bitter strike in 1969, Harry V. Quadracci decided to leave Krueger to start his own printing company.[2] In 1971, Quadracci established Quad/Graphics in a vacant Pewaukee manufacturing facility with capital from a second mortgage on his Pine Lake home and investments from family, friends, and several wealthy Milwaukee-area industrialists.[3] Harry R. Quadracci and several Krueger employees soon followed Harry V. Quadracci to the new firm.[4]

Quad/Graphics struggled in the early 1970s, encountering limitations with its equipment and troubles securing regular contracts during the recession of 1973-1975.[5] However, the company gradually established itself in the magazine and catalogue market, obtaining contracts for the Wisconsin-based Investor magazine, the national Fishing Facts magazine, catalogs and inserts for Mail, Inc., as well as several adult men’s and drug culture magazines.[6] The company steadily grew from around 20 workers and one press in 1972, to 100 workers and three presses by 1976, and 300 workers and six presses by 1979.[7]

By the late 1970s, Quad/Graphics had landed its first substantial national contract with Newsweek. This proved to be a pivotal relationship for the company, helping to generate other big contracts with Harper’s, Time, and U.S. News & World Report, among others.[8]

In addition to establishing its own distribution company in 1973, Quad/Graphics also formed several subsidiaries in the 1970s and 1980s. These included a research and design division, a division to develop new inks, and one to publish advertising inserts.[9] Quad/Graphics also purchased Milwaukee Magazine in 1983, appointing Betty Quadracci (Harry V.’s wife) president and publisher.[10]

The company added significantly to its production facilities through the 1980s and 1990s. It expanded its Pewaukee plant (1981), built new plants in Sussex (1982) and Hartford (1990), and acquired old industrial facilities in several nearby locations.[11] By the mid-1990s, Quad/Graphics had also established plants in New York, Georgia, and California.[12] These facilities served major publications, including Time, People, Sports Illustrated, Playboy, and National Geographic, as well as catalogues for Lands’ End, and L.L. Bean.[13] By the mid-1990s, Quad/Graphics had become a national industry leader, employing nearly 9,000 workers.[14]

Quad/Graphics continued to grow through the late 1990s and 2000s, establishing global operations in Europe and Latin America, and acquiring national competitors.[16] However, the company closed several plants and laid workers off in the early 2010s as the industry consolidated and struggled in the wake of new demands for digital media.[17] In 2012, the company launched a new digital print application, “actable,” to help gain a foothold in the digital print market.[18] Although Quad/Graphics became a publicly traded company in 2010, the Quadracci family remains in its leadership positions. Tom Quadracci became company president after his brother Harry V.’s death in 2002, followed by Harry’s son Joel in 2006.[19]