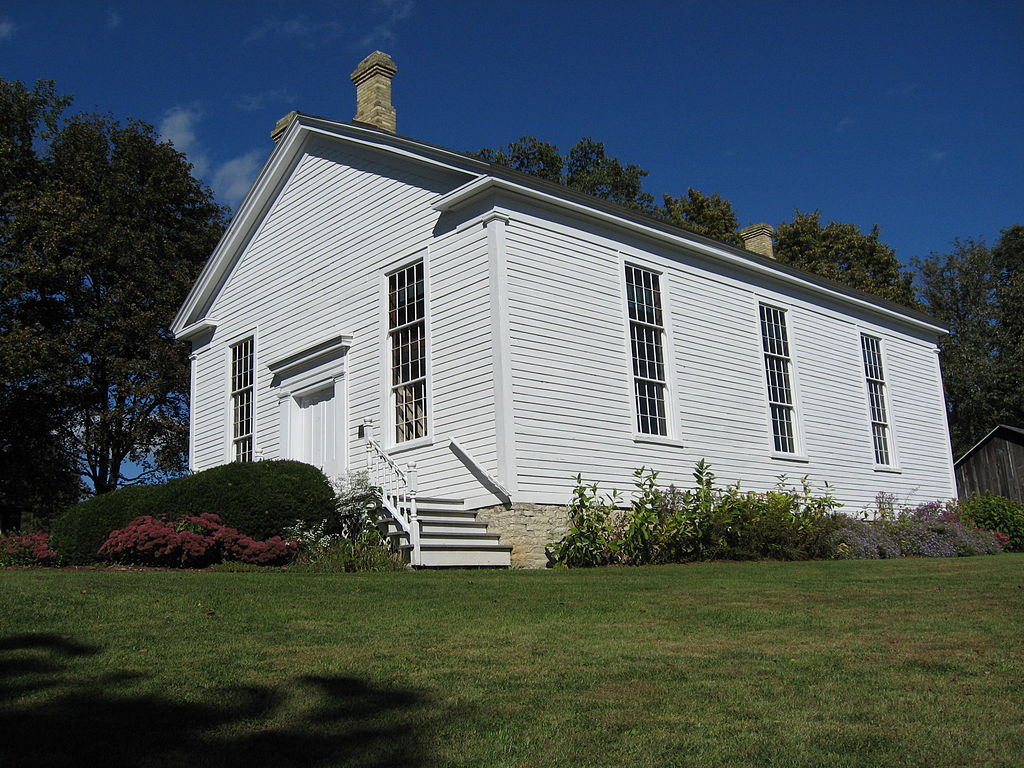 The earliest known residents of Big Bend and Vernon were the mound builders. Little is known of these Native Americans, but many of their creations were found within present-day Vernon and Big Bend. The Vernon area included conical, linear, and effigy mounds.[1]

In 1836, the Town of Vernon was founded by four Vermont natives: Prucius Putnam, John Dodge, and brothers Orrin and Curtis Hazeltine. In honor of their native place, these settlers borrowed Vermont’s first syllable and called their new home Vernon.[2] In 1841, Prucius Putnam’s brothers Aaron and Amos Putnam opened the first saw mill on the Fox River’s largest curve in Vernon. This settlement became Big Bend.[3] The river was lined with maple trees that provided sap and timber for the growing community.[4] Well into the twentieth century, lumber was one of Big Bend’s most important industries.[5]

Most of Vernon and Big Bend’s early white residents were farmers. Following countywide trends, farmers in Vernon transitioned from wheat production to dairy farming over the nineteenth century. Vernon, along with Mukwonago and Waukesha, was one of Waukesha County’s chief sheep-farming districts during and after the Civil War.[6] By 1880, the majority of Vernon and Big Bend’s farmers and residents were Yankee-Yorkers, Scots, and Germans. The region was also home to smaller Irish, English, and Norwegian communities.[7] In 1893, spring water from Big Bend was sold at the Chicago World’s Fair. The owners of Waukesha’s famous springs had hoped to ship their water to the fair, but facing opposition from city residents, they sent water from Big Bend, instead.[8]

Big Bend and Vernon grew in tandem, but their relationship has sometimes been contentious. Although Big Bend and Vernon share services, such as a fire department and library, residents have resisted consolidation. The most recent consolidation attempts, in 2002 and 2003, were rejected by Vernon voters.[9] Big Bend has annexed some territory from Vernon, including in a 1998 annexation of land surrounding the Interstate 94/Highway 164 intersection that ended in court.[10]

Present day Big Bend and Vernon are increasingly residential communities. With the growth of suburbs and the interstate system since the 1960s, the populations of Big Bend and Vernon boomed.[11] As recently as 1970, over 90% of Vernon and Big Bend’s land was agricultural or rural. Though the largest portion of Vernon’s land remains in agricultural use, subdivisions and annexations are increasing the area’s population density.[12] Many of these new residents commute to jobs outside of Vernon. The majority of Vernon and Big Bend’s current residents live in single-family homes, many of which were built since 1970.[13] The area is home to two golf courses, a campground, and the Vernon Marsh Wildlife Area.[14] Both communities are part of the Mukwonago Area School District.

The History of Waukesha County, Wisconsin, Containing an Account of Its Settlement, Growth, Development and Resources; An Extensive And Minute Sketch of Its Cities, Towns and Village—Their Improvements, Industries, Manufactories, Churches, Schools and Societies; Its War Record, Biographical Sketches, Portraits of Prominent Men and Early Settlers; The Whole Preceded by a History of Wisconsin, Statistics of the State, and an Abstract of Its Laws and Constitution and of the Constitution of the United States. Chicago, IL: Western Historical Company, 1880.