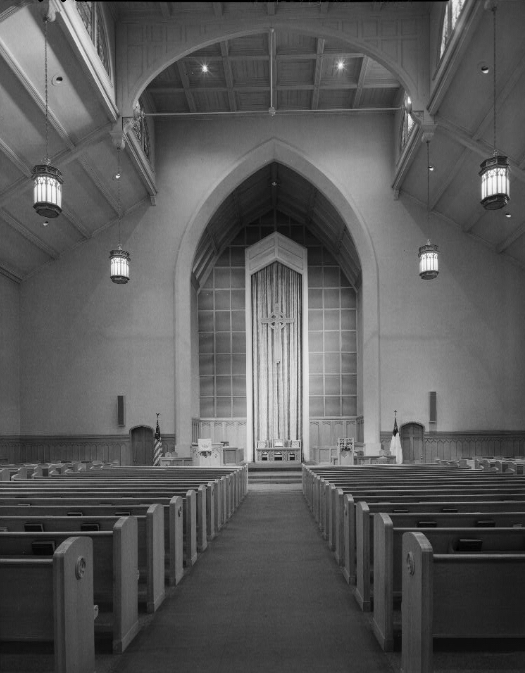 When Presbyterianism first arrived in Milwaukee, it came in union with Congregationalism. For the purpose of expanding into the American West, Congregationalists and Presbyterians in the Eastern states had joined in their support of the American Home Missionary Society in the late 1820s.[8] Early Wisconsin missionaries served Southwestern Wisconsin miners, Northeastern Wisconsin settlers, and the Stockbridge Indians.[9] By 1835, local Yankee-Yorker settlers adhering to both faiths were meeting for worship in Milwaukee homes.[10] These early Milwaukeeans wrote to the American Home Missionary Society, asking for assistance in establishing a unified congregation.[11] The understanding between the Congregationalists and Presbyterians held that the members of each new congregation would vote on the denominational designation of their church.[12] After discussions and disagreements on the denomination of their new Milwaukee church, eighteen congregation members, under the guidance of Green Bay-area missionaries Cutting Marsh and Moses Ordway, met at the county courthouse on April 13, 1837 to organize the First Presbyterian Society of Milwaukee.[13] Within a few months, the congregation had constructed its first building (likely the first church built in the city) at the corner of what is now 2nd and Wells streets.[14] Having outgrown its original site within a short time, First Presbyterian met in a rented hall in the early 1840s before moving into a new building at the corner of Mason and Milwaukee avenues in 1842.[15]

In 1869, the Old and New Schools of Presbyterianism reunited, but within Milwaukee reunion coincided with congregational realignments.[22] Presbyterians living west of the Milwaukee River, who had long travelled to the other side of the city for services, built their own church, Calvary Presbyterian, on what is now Wisconsin Avenue.[23] Calvary’s founding members were drawn from both First Presbyterian and North Presbyterian. Facing decreased membership and reunited presbyteries, these two churches on the east side of the river merged in 1870.[24] The combined church, rechristened Immanuel Presbyterian, dedicated a new Victorian Gothic building on Astor Street in 1875.[25]

Both Calvary and Immanuel counted many prominent members of Milwaukee’s Yankee-Yorker elite among their members, but as the turn of the twentieth century approached immigrant communities expanded within Milwaukee Presbyterianism.[26] Some immigrant groups brought their own Presbyterian traditions. Welsh settlers in Waukesha County favored a strong Calvinist Methodist tradition. Their administrative body, the Wisconsin Gymanfa, became one of the largest constituent bodies in the American Welsh Calvinistic Methodist Church before that denomination’s 1920 merger with Presbyterianism.[27] And Dutch immigrants established at least three Presbyterian churches in Milwaukee during the course of the mid-nineteenth century.[28] In order to serve and evangelize other immigrant groups, Calvary and especially Immanuel financed mission congregations throughout the city.[29] Although Presbyterians and other Yankee-Yorker Protestants were soon eclipsed in number by Lutheran and Roman Catholic immigrants, several of the Presbyterian missions took root and grew into mature congregations.[30]

In the vein of the Social Gospel, mission churches emphasized Americanization and social welfare together with traditional Presbyterian understandings of vice and virtue. Mission churches offered homemaking classes for recent immigrants and kindergartens for their children.[31] Together with other Yankee Protestants, local Presbyterian organizations advocated for Prohibition and blue laws.[32] Opposition to alcohol and gambling were social priorities of the Milwaukee Presbytery well into the twentieth century.[33] In the second half of the century, the Milwaukee Presbytery increasingly focused on progressive social justice goals.[34] Local congregations have been instrumental in local food and housing programs, including the East Side’s Interchange and Tippecanoe Presbyterian’s Divine Intervention.[35] The Milwaukee Presbytery became a strong early advocate for the ordination of gay and lesbian clergy.[36]

Twentieth-century suburbanization created and strengthened congregations across greater Milwaukee, but declining membership in mainstream Protestant denominations led to church mergers and closures. Mequon’s Crossroads Presbyterian, opened in 1956, surpassed Immanuel to become the Milwaukee Presbytery’s largest congregation by the 1980s.[37] Despite this suburban growth, the number of Presbyterian Church (U.S.A.) members in the eleven county Milwaukee Presbytery fell from over 13,000 in 1993 to fewer than 9,000 in 2012.[38] In response to shrinking numbers, some Milwaukee churches have shuttered and others have merged.[39]

Kennedy, Charles Johnston. “The Congregationalists and the Presbyterians on the Wisconsin Frontier.” Ph.D. diss., University of Wisconsin, 1940. 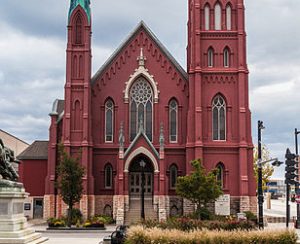