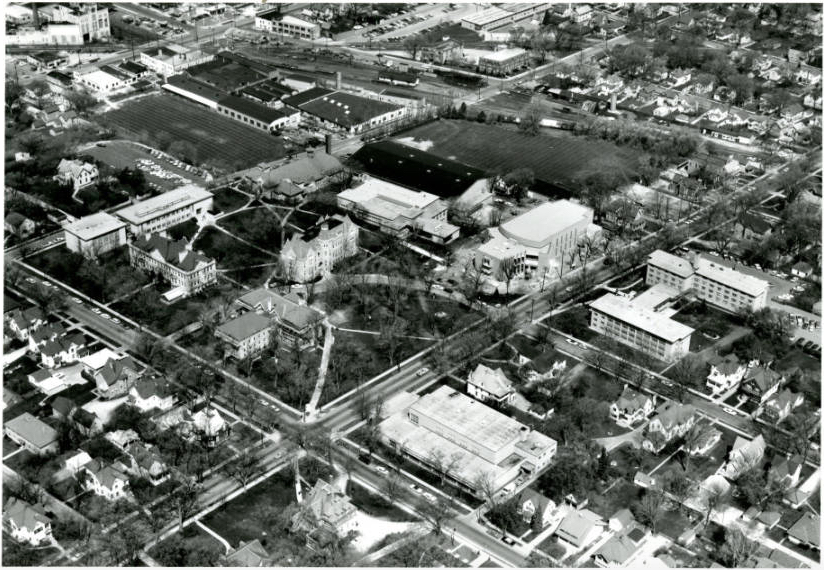 Founded by territorial charter in 1846 in Waukesha, Wisconsin, Carroll College grew out of the then five-year-old Prairieville Academy, a preparatory program to fit young men for entry into the state university or eastern colleges. Carroll’s official charter, signed on January 31, 1846 by Territorial Governor Henry Dodge (two days before he signed the Beloit College charter) made it Wisconsin’s oldest college. It was at first a secular institution, situated on ten acres on a tall hill just south of the city of Waukesha. Its first leader, Eleazar Root from Williams College, recruited two young men from Princeton University to come to his school as teachers.[1]

Root could not raise sufficient funds for the school, causing him to leave for a career in education in Madison. The trustees at Carroll decided in 1850 to affiliate with the Presbyterian Church in Wisconsin to receive financial support. Root tried, but failed, to hire the Reverend Daniel Carroll of New York to lead the school. He subsequently created the story that the college’s name was in honor of Charles Carroll, a signer of the Declaration of Independence, but Carroll was a Catholic, so this claim is dubious.[2]

They then hired the Rev. John Adams Savage, a Presbyterian from New York and a graduate of Union College, to head Carroll. Savage came west and shortly thereafter oversaw the construction of the school’s “Main Hall” and also undertook a major fundraising effort to keep the school alive, but as one leader noted: “The Presbyterians almost starved Carroll to death.” Money troubles plagued the school for decades thereafter.

In the 1850s, Carroll graduated its first several classes of men, who took courses in Latin, Greek, theology, the sciences, and surveying. The onset of the Civil War witnessed almost one-half of Carroll’s nineteen alumni and students departing for the Union Army. The college returned to its preparatory school roots, admitting female students in 1863 to keep its doors open. Savage left that same year as the trustees brought Dr. Walter L. Rankin, a Princeton graduate, to become its leader in 1866. His dedication over the next four decades kept Carroll alive, although the school suffered debt, lack of support, and a devastating fire.[3]

Although he often paid the school expenses by not taking his own salary, Rankin finally succeeded in attracting Ralph and Elizabeth Voorhees from New Jersey as key donors. With their money, the school was able to return to college status just after 1900 and added new stone buildings and its first dormitory. It also achieved prominence in dramatic arts, led by May Nickell Rankin, daughter of the president, whose theater program put the school on the cultural map and enrolled luminaries such as Alfred Lunt and Fred MacMurray.[4]

Used by the military as a training center in both world wars, Carroll emerged at its centennial in 1946 as a strong Presbyterian, liberal arts college with an enrollment of more than 1,000 students. Decades since the 1950s have witnessed the addition of programs in physical therapy, business, computers, and health fields, leading to its recent designation as Carroll University in 2008. With an enrollment over 3,400 in 2014, the school offers nearly sixty majors while still upholding its original motto: “Christo et Litteris”—for Christ and Learning.[5]