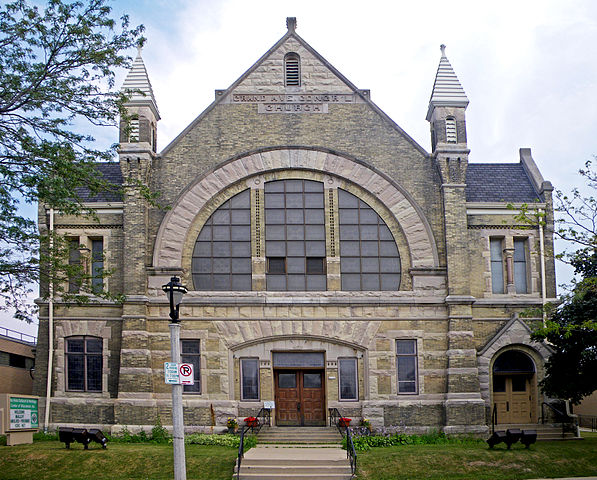 Milwaukee Congregationalism predated the city’s incorporation in 1846. The first society was short-lived, disbanding in 1837, but by 1840 AHMS agent Stephen Peet reported regular Sunday services in the city. Known as the First Congregational Bethel Church of Milwaukee and later as Plymouth Church, its twenty-four members first met in the upper level of a building at West Water and Spring Streets before moving to a proper church in 1843. (Wauwatosa’s First Congregational Church, meanwhile, was founded in 1842.) In January 1847, minority factions from Plymouth Congregational and Immanuel Presbyterian withdrew to establish a more radically abolitionist communion, their former churches having disengaged from the slavery question in 1846. These twenty-two members together convened the Free Congregational Church and swiftly passed a resolution that slavery was “a great sin” and called for its “immediate abolition.” Soon known as Spring Street Church, in 1881 this body changed its name to Grand Avenue Congregational Church. In 1887 it moved to an impressive structure in Milwaukee’s then-suburbs and was the city’s leading Congregational church in numbers and wealth for several decades.[2]

By the 1880s, the demographic outlook for Milwaukee Congregationalism was not as favorable as it had once seemed, although well-to-do Protestants ensured that the denomination exerted a disproportionate influence over municipal life. In 1889, Plymouth Church moved from its home at North Milwaukee and East Wells to a sprawling property at Oneida and Van Buren Streets that boasted a gymnasium, 400-seat amusement hall, large organ, and stately furnishings, together worth an estimated $100,000. Despite such conspicuous wealth, by 1895 the nation’s leading Congregational publication worried that “Milwaukee is a foreign city” and “[w]e shall have to wait a little for these people to Americanize.” Although dwarfed by Catholic and Lutheran churches, by the turn of the century there were seven Congregational churches in Milwaukee proper, including one Swedish, one Bohemian (later Bethlehem Church), Hanover Street Church (with ties to the south side working class), North Side Church (begun as a mission to the German community), and Pilgrim Church (on the city’s western edge), in addition to Grand Avenue and Plymouth.[3]

Milwaukee’s Congregationalists proved to be first-rate joiners, with Plymouth Church alone claiming twenty-five associated clubs in 1894. These church societies ranged from Ladies’ Auxiliaries and Boys’ Brigades to literary societies and the Milwaukee Congregational Club. Congregationalists were also active in founding the Y.M.C.A., and in the educational realm where they supported Rochester Academy (founded 1895) and Milwaukee-Downer College (a merger of Downer and Milwaukee colleges). During this era Milwaukee’s Congregationalists exhibited a cultured sensibility and a self-consciously “enlightened” or “modern” theological perspective. Grand Avenue’s Rev. George H. Ide was known for his large public lectures on classical literature; Plymouth’s Rev. Judson Titsworth often sought to reconcile science and religion in his lectures and writings.[4]

The Progressive Era was the heyday of Congregational public activism. Drink, Sabbath recreation, gambling, and graft were targeted by Congregationalists in Milwaukee’s interdenominational Ministerial Association, the Municipal League, and the Anti-Saloon League. Judge Joshua Stark, a leading member of Plymouth Church, drafted Wisconsin’s 1895 civil service act to stem corruption in state and local government, and sat on the Municipal League’s executive committee alongside Rev. Titsworth. Although civic morality loomed large in these efforts, the Social Gospel was also prominent. Rev. Titsworth consistently emphasized Christian service, supported Plymouth Church’s manual training classes, and in 1904 welcomed national Social Gospel leader Washington Gladden to his church to address the Congregational Club. The local labor movement rendered the social question especially urgent. Hanover Church hosted a working men’s organization and cultivated sympathy with the labor cause through Sunday evening discussions of social conditions. In early 1906, the Milwaukee District Convention devoted an evening to the labor issue where representatives for the unions bluntly refused to support church attendance and indicted church constituents as capitalistic and individualistic. Yet if not overtly socialistic, Milwaukee’s Congregational churches did regularly endorse reform measures. In 1921, Plymouth’s Rev. Theodore Shipherd proposed a “prohuman” agenda of minimum wage and reasonable working hours.[5]

Suburban growth began to take its toll on downtown churches by the 1910s. Pilgrim Church merged with Grand Avenue in 1915, diverting resources to a new suburban church on Sherman Boulevard, which soon doubled in size. During the Great Depression, Grand Avenue reached its peak membership at 1,500, but after World War Two the pace of suburbanization accelerated, leaving churches in the city center with fewer families on the rolls. This era saw the beginning of national declines in mainline sects, even amid denominational mergers. In 1957, the General Council of Congregational Christian Churches joined with the Evangelical and Reformed Church to form the United Churches of Christ (UCC), with Grand Avenue, Plymouth, and Grace Church following suit. Wauwatosa’s First Congregational Church affiliated with the National Association of Congregational Christian Churches (NACCC), founded in objection to the merger. The NACCC has been headquartered in the greater Milwaukee area since 1959, when Wauwatosa’s Rev. Neil Swanson assumed leadership of the national body.[6]

Milwaukee’s historically Congregationalist churches have remained socially conscious. In 1957 Grand Avenue welcomed Dr. Martin Luther King, Jr. to its pulpit; the churches were later vocal in anti-war protests and gay rights, with Plymouth Church officially welcoming LGBT members in 1991. Yet the challenges of mainline Protestant decline and city center ministry remained. In 1997, having suffered dwindling membership and financial setbacks, historic Grand Avenue Church closed its doors after one hundred and fifty years. As of 2015, Plymouth Church remains the leading historically Congregational church in the city.[7]