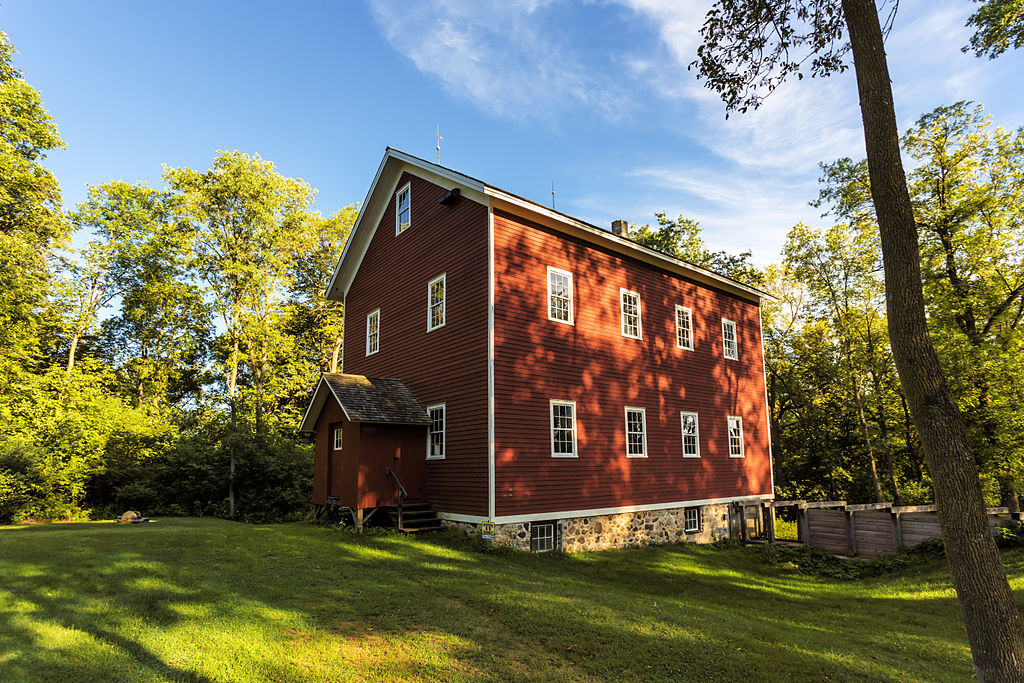 Richfield is a village in south-central Washington County. In its early history, the future Village of Richfield was part of the Town 9, Range 19 survey township, which was the standard size of 36 square miles.[1] This township contained farmland and several small hamlets, including Colgate, Hubertus, Lake Five, Plat, Pleasant Hill, and Richfield.[2] The first white settler to purchase land in the Richfield Township area was a speculator named Samuel Spivey, who bought 160 acres in June of 1841.[3] By 1848, almost all of the land in the area was settled. On January 21, 1846, Richfield was officially incorporated as a town.[4] At this time, most of the land in Richfield was used for farming, with wheat farming dominating the landscape until about 1860.[5] Due to a number of factors that were affecting most farmers in the region, including soil exhaustion and disease, dairy farming replaced wheat farming around 1880.[6] In the nineteenth century, two railroad lines connected Richfield’s people and goods to larger population centers like Milwaukee.[7]

The numerous bodies of water located in the area helped make farming successful in Richfield. Richfield has 6 lakes within its current boundaries, the largest of which is Friess Lake.[8] The area also has many small creeks and streams.[9] The land around the lakes became a recreational attraction starting around the turn of the twentieth century. Many local farmers sold land bordering the lakes for activities such as swimming, fishing, and camping.[10] In 1919, the YMCA of Metropolitan Milwaukee opened Camp Minikani, a residential youth camp on Amy Belle Lake.[11]

Despite the lake attractions, until recently the area’s economy remained centered on farming.[12] Starting in the 1970s, residents debated land use. Some wanted real estate development and others wanted the preservation of farmland.[13] Real estate development won out; by 2006 there were only a few farms left.[14] In 2010, there were 11,300 people living in Richfield, of whom 96.9% were white.[15] Almost all housing units are single-family structures, with a median value of $310,000; the homeownership rate is 98.3%.[16] As more of the land in the township became developed, citizens sought to incorporate and become a village, which offered them protection from annexation by neighboring municipalities.[17] In November 2007, the Town of Richfield voted affirmatively to incorporate as the Village of Richfield. The new village, which is 35.91 square miles, includes the unincorporated hamlets that were part of the original township as well as a business park and Cabela’s, a large retail store.[18]