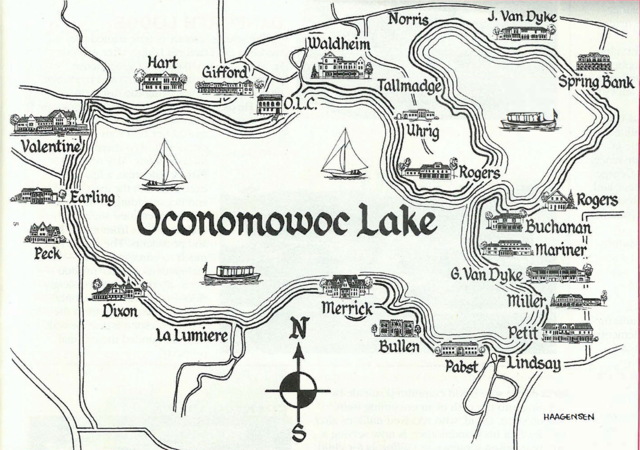 Oconomowoc Lake is a village in Waukesha County, about 30 miles west of Milwaukee. The village completely surrounds the large lake it is named after, which is the village’s focal point. Originally part of the Towns of Summit and Oconomowoc, the community came into being in the early twentieth century. Like the nearby village of Lac La Belle, Oconomowoc Lake began as an area of lakefront summer homes for wealthy residents of Milwaukee, Chicago, and St. Louis. In the 1930s it transitioned from resort area into a yearlong residential community. In 1934 residents created the “Unofficial Village of Oconomowoc Lake.”[1]

The village’s incorporation process was long and difficult, spanning seven years and three Wisconsin Supreme Court cases. In 1953 the court first ruled that because the proposed village included the lake’s area, it did not meet the state’s population density rule.[2] In 1955, residents filed a new petition that excluded the lake. But the Supreme Court decided that the community still could not become a village because it lacked a school and business center.[3]

In response to the third attempt in 1959, however, the court contradicted its previous opinion, citing the incorporation of the Village of Chenequa. The court decided that because of automobiles, a modern community no longer necessarily centered on a business district, school, and church. Families could reside in one community and easily travel to others for work, shopping, or recreation. The court further stated that Oconomowoc Lake’s “spirit of togetherness,” “core of community spirit,” and “unity of action or purpose” met the constitution’s requirements for incorporation.[4] After the ruling, residents voted to incorporate with a population of 426.[5]

In the twenty-first century, Oconomowoc Lake is still one of the wealthiest communities in the greater Milwaukee area. It maintains a low density, with a population of only 595 in 2010. There are a few businesses in the village, concentrated in a 40-acre cluster on its far northwestern border. Fiberesin, a plastics manufacturer which employs about 140 people, is the largest business in the village. Maintaining the quality of the lake is the foremost goal in village planning. While there is a public boat launch, the village lacks public parks or facilities.[6] The private Oconomowoc Lake Club, which has been a part of the community since 1890, offers recreational activities and dining options.[7]