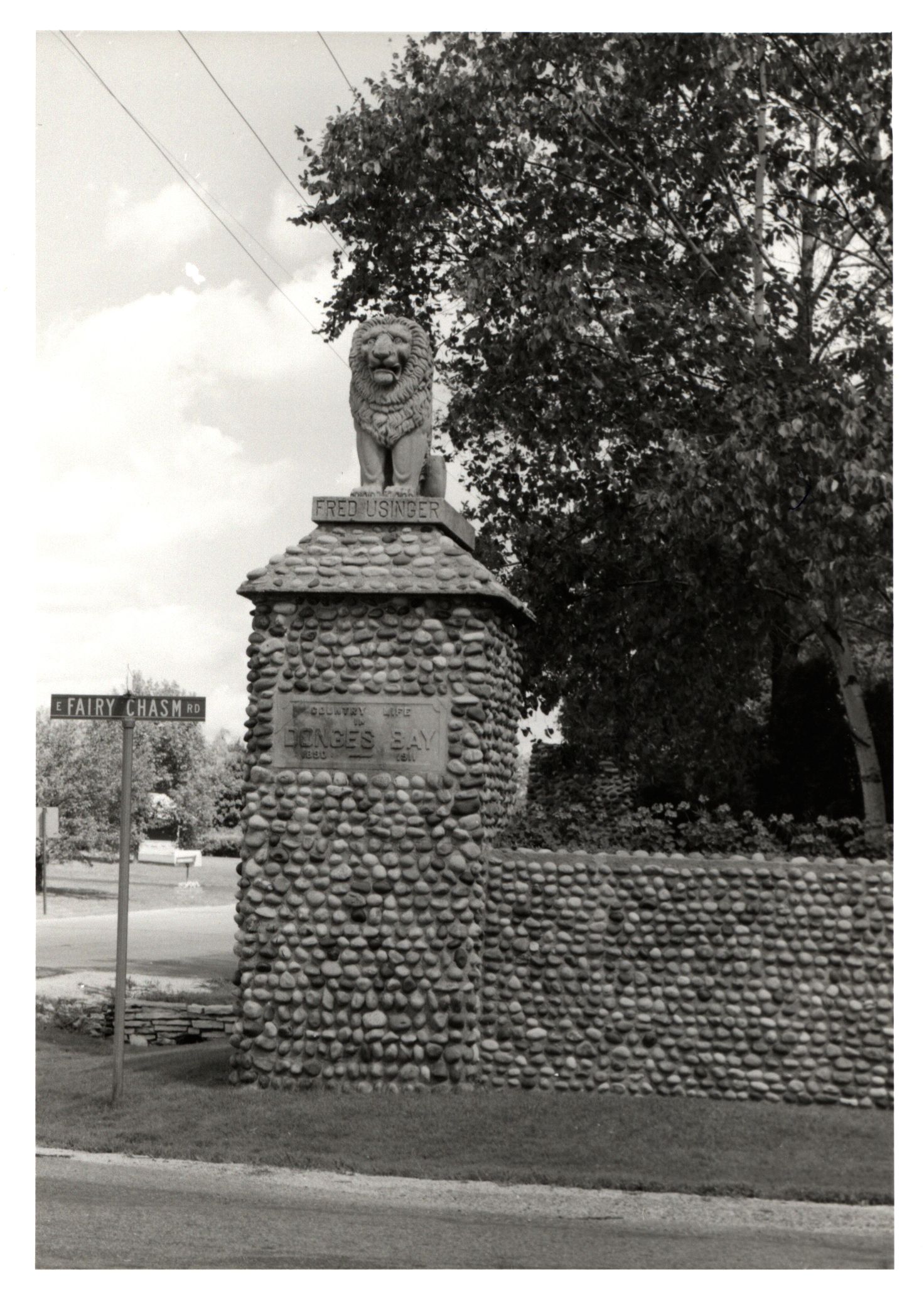 Located along Lake Michigan, about twelve miles north of downtown Milwaukee, the Village of Bayside occupies the northern end of Milwaukee County’s lakeshore and extends into Ozaukee County. The Village had a population of 4,389 in 2010 and a median estimated home value of $325,600 in 2014.[1] An agricultural and summer home region in the nineteenth and early twentieth centuries, Bayside began as an entirely residential community.[2] Incorporated in 1953, the Village sought to retain its natural and residential character, while preventing annexation by its neighbors.[3]

Forests once dominated the area that is now Bayside.[4] While it is unclear if Native Americans used this area for permanent settlements, it is likely that Potawatomi chief Waubeka maintained a summer village and fishing ground nearby.[5] In 1835, Yankee Yorkers bought and began to clear the land of Bayside for the lumber industry. Then many of these easterners sold the cleared land to German and Dutch immigrant farmers.[6]

The most famous of Bayside’s farms was the Schlitz Nine Mile Farm. Acquired by the Schlitz Brewery in the late 1880s, the farm supplied food and recreation to the brewery owners and served as a convalescent home for the brewery’s draft horses.[7] As Bayside suburbanized in the mid-twentieth century, tensions arose over the future of the farm. By the 1960s, Bayside residents disagreed whether the farm should be subdivided or maintained as open space.[8] The issue was finally decided in 1971 when the Schlitz Foundation donated the land to the National Audubon Society.[9] Maintained today as the Schlitz Audubon Nature Center, the former farm is a 185-acre preserve and the largest parcel of undeveloped land in the Village of Bayside.[10]

By the late nineteenth century, Bayside’s farms were joined by communities of vacation cabins belonging to Milwaukee’s elite.[11] The Fairy Chasm neighborhood was one such community. In 1892, businessmen from Milwaukee’s Third Street incorporated themselves as the Fish Creek Park Company and bought 146 acres near the mouth of Fish Creek.[12] For many of its early years, Fairy Chasm was dotted by summer cabins and walking paths.[13] As automobiles became more common in the decades following World War II, the neighborhood shifted from summer to year-round residences.[14] Fairy Chasm’s transition was part of a larger regional building boom; the majority of Bayside’s current homes are single-family houses built between 1950 and 1980.[15] Although Fairy Chasm considered incorporation as its own village, residents south of Fish Creek successfully petitioned for annexation to Bayside in 1955.[16] This annexation was controversial for partitioning Fairy Chasm, but also because it extended Bayside beyond the Milwaukee County line.[17] The South Fairy Chasm annexation remains the only portion of Bayside located in Ozaukee County.[18] Northern Fairy Chasm became part of the City of Mequon.

Bayside coordinates with neighboring North Shore municipalities to provide services to its residents. The Village is served by Nicolet High School and North Shore Library, both of which are located in Glendale.[19] Bayside shares an elementary school district and senior center with Fox Point.[20]

It may go without saying, but historians owe a deep debt of gratitude to people who record their actions and save their materials. While we sometimes delve into subjects with little written or visual record, most of historians’ work builds upon the work of earlier record keepers and documentarians. Sometimes, as happened when I began researching the Village of Bayside, we researchers encounter a treasure trove of historical information that we just cannot quite use for our original purpose.

When I began researching Bayside, I turned, as I always do, to the Bibliography of Metropolitan Milwaukee.[1] The Bibliography listed two sources for Bayside, but these books had curious names. Both mentioned something called “Fairy Chasm.” Apart from the street in northern Milwaukee County, I had never heard of Fairy Chasm. I came to find, however, that Fairy Chasm Road is merely the most visible manifestation of an active community with a long, well-documented history. In addition to the two local histories listed in the Bibliography, I examined two archival collections at the University of Wisconsin-Milwaukee that explain the origin and evolution of Fairy Chasm. As an archival student, I simply could not pass up the chance to look through the records, histories, and photographs created by this community. At the end of my day in the archives, however, I had a plethora of information on Fairy Chasm, but little on Bayside. Since Fairy Chasm is only a small portion of the municipalities of Bayside and Mequon, only a small portion of this research made its way into these encyclopedia entries. It is my pleasure to share a little more of it here.

Fairy Chasm was the dream of Jacob Donges, a Third Street hat and glove merchant.[2] Donges, whose name lives on in Lake Michigan’s Donges Bay and its adjoining Donges Bay Road, hoped to create a summer home for himself near the Fish Creek ravine in rural Ozaukee County, but he did not have the funds to buy the land alone.[3] To realize his dream, Donges brought together a group of fellow merchants in 1892 to form the Fish Creek Park Company. The new company purchased 146 acres just north of the Milwaukee-Ozaukee County line along Lake Michigan. Early residents included the owners of Old World Third Street institutions like Usinger Sausage.[4] As Donges had intended, Fish Creek Park Company members built cabins and summer resorts along the creek that ran through their property. The Company was responsible for the area’s upkeep, including roads and dams. Local clubs, such as the Fairy Chasm Athletic Association, furnished the residents with activities.[5] These clubs, like the neighborhood itself, were exclusive to residents. The gates at South Fairy chasm were closed to outsiders and were guarded on certain weekends and holidays.[6] Even now, the area is closed to visitors, including Google’s street view cameras.

By the mid-twentieth century, Fairy Chasm had become a year-round residential community and the children who grew up in the neighborhood often became its documentarians. As incorporation swept through the rural towns of Milwaukee and Ozaukee County in the 1950s and 1960s, Fairy Chasm considered its own separate incorporation.[7] In the end, however, the community decided to divide itself. South Fairy Chasm was annexed to Bayside in 1955.[8] When Mequon incorporated, North Fairy Chasm was included. The Fish Creek Park Company dissolved itself in 1971.[9] The new South Fairy Chasm Association maintained control over the roads in the Bayside portion of the neighborhood, but north Fairy Chasm ceded its property to Mequon.[10] With these decisions, Fairy Chasm has become a less unified and less identifiable area.

Today, Fairy Chasm is hard, if not impossible, to find on a map. In fact, without the records maintained by the residents of Fairy Chasm, this history may have been lost. Thanks to the work of these documentarians and the University of Wisconsin-Milwaukee archivists, however, this history is easily accessible to researchers. These record keepers and access providers have my utmost gratitude.