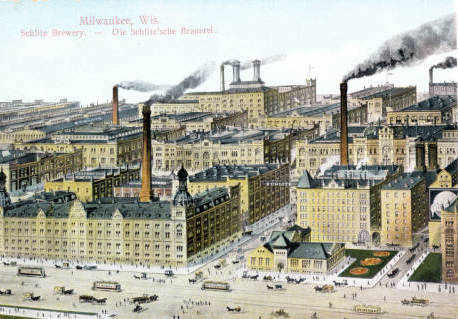 The Schlitz Brewing Company (1849-1982) was one of Milwaukee’s industrial brewing giants. Marketed as “the beer that made Milwaukee famous,” Schlitz was an important innovator in the national brewing industry and the largest brewery in the United States for a significant part of the twentieth century.

The Schlitz Brewing Company originated in August Krug’s pioneer restaurant/brewery, established on Chestnut Street (now Juneau), between Fourth and Fifth Streets, in 1849. Krug steadily expanded and industrialized his brewing operations and hired Joseph Schlitz, newly arrived from Mainz, Germany, as his bookkeeper in 1850. Schlitz bought the brewery after Krug died unexpectedly in 1856, and married his widow in 1858.[1]

Under Schlitz’s leadership, the company built a new, larger brewery on Third and Walnut Streets in 1870.[2] The new site allowed for greater immediate production capacity and expanded into a sprawling, multi-block complex by the 1890s.[3]

Like other major Milwaukee brewers, Schlitz benefited immensely from the nearby Chicago market, opening an agency there in 1868.[4] The Great Chicago Fire of 1871 temporarily destroyed the local brewing industry, and Schlitz more than doubled sales over the next year.[5]

Schlitz employed a wide array of scientific, technological, and marketing innovations to standardize their product and compete for leadership of the national market. In 1883 William J. Uihlein brought the first pure culture yeast strain to the United States from Copenhagen, which allowed Schlitz to produce a higher quality beer more consistently.[7] Schlitz helped establish the Union Refrigerator Transit Company in the 1890s, with Joseph Uihlein, Sr. as president, to develop and operate a more cost-effective refrigerated freight line for the brewery.[8] Schlitz was the first to introduce the brown bottle to industrial brewing in 1911, which protected the beer from the harmful effects of light during shipping.[9] Between the late 1870s and early 1900s, Schlitz invested heavily in building and maintaining “tied house” saloons in Milwaukee and beyond, and also established other significant Milwaukee leisure spots, like the Schlitz Park beer garden (1879) on Eighth Street near Walnut; the Schlitz Hotel (1890); the Schlitz Palm Garden (1895); and the Uihlein (later Alhambra) Theater (1896) downtown.[10] Schlitz first introduced its belted globe logo in 1892 and its memorable slogan, “The beer that made Milwaukee famous,” in 1894.[11] In 1898, Schlitz sent highly publicized gifts of beer to Admiral George Dewey’s men after their victory in Manila during the Spanish-American War and to Theodore Roosevelt’s hunting party in Africa.[12] These moves paid off as Schlitz passed Pabst as the largest brewer in United States by 1902.[13]

Schlitz returned to its position as a national brewing leader after the repeal of Prohibition in 1933, becoming the largest American brewery again by 1947, and remained in either first or second place until the mid-1970s.[15] The company continued to expand through the 1950s and 1960s.[16] By the late 1960s, Schlitz had added plants in Brooklyn, Kansas City (Missouri), Tampa, San Francisco, Van Nuys (California), and Longview (Texas), as well as affiliates in San Juan (Puerto Rico), and Seville, Barcelona, and Madrid (Spain).[17] Schlitz developed innovative television marketing campaigns in the 1960s with the slogans, “Real gusto in a great light beer,” and “When you’re out of Schlitz, you’re out of beer.”[18] The company continued to make civic contributions to Milwaukee in the 1960s and 1970s, including the downtown Performing Arts Center (with the main Uihlein Hall), the Schlitz Audubon Nature Center, the Great Circus Parade, and the Streets of Old Milwaukee exhibit at the Milwaukee Public Museum.[19]

Despite its success, the company stumbled in the late 1960s. In 1967, Schlitz introduced a more efficient brewing process called “accelerated batch fermentation.” While allowing for a lighter beer to be produced at lower costs, consumers believed the change was made at the expense of the beer’s quality.[20] Schlitz also experienced a major problem with “flaky” or “hazy” beer due to a production problem in 1976. Although it was “perfectly safe” to drink, the beer looked tainted. Schlitz officials did not act on the problem until sales had already begun plummeting, unsuccessfully attempting to recall and discard the bad batches secretly.[21] Leadership was transferred out of the Uihlein family for the first time after the death of Robert Uihlein, Jr. in 1976.[22] In 1981, Schlitz attempted to reduce production costs by forcing concessions on its workers, who went on strike. Contract negotiations broke down. The Schlitz board closed the Milwaukee plant, and sold out to the Stroh Brewing Company in 1982.[23]

The Schlitz brand lives on in the portfolio of the Pabst Brewing Company. The brewery complex was redeveloped into the Schlitz Park Office Center in the mid-1980s.[24] 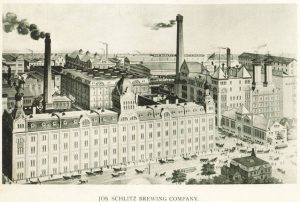 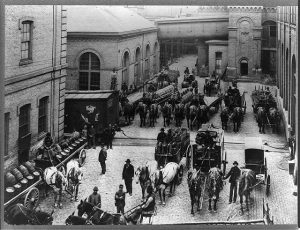