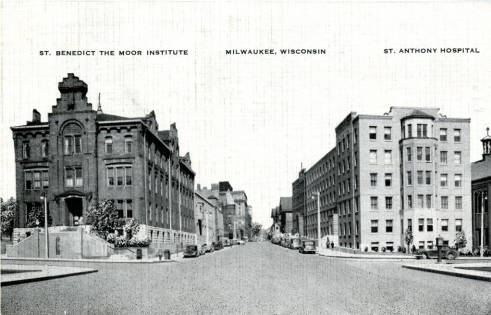 Established in 1908, St. Benedict the Moor Mission was the principal focus of the Archdiocese of Milwaukee’s early ministry to African Americans. Its school was one of the few boarding schools for African American children in the country. While priests and sisters formed good Catholics, they also nurtured strong, knowledgeable, and confident individuals able to challenge the racism in their society and Church.

In 1908 Captain Lincoln Valle, an African American Catholic layman and newspaper editor from St. Louis and Chicago, came to Milwaukee with his wife, Julia Yoular, to establish a mission to convert African Americans to Catholicism. Archbishop Sebastian Messmer approved Valle’s mission. It began modestly in a vacant storefront at 274 Fourth Street. The Capuchin Franciscan priests from St. Francis Friary assisted in offering Mass. In June 1909 Valle moved the mission to a frame house at 530 State Street and the chapel was formally named St. Benedict the Moor. In the same year, Valle recruited the School Sisters of Notre Dame to provide Sunday religious instructions to the children. In January 1912, Reverend Cyril Kufner, a Capuchin, became the first permanent pastor.

Under Capuchin leadership, St. Benedict the Moor flourished, requiring the purchase of a house to serve as a new church located at 1041 N. Ninth Street. The parish also purchased a parish hall and a building for a school. The School Sisters of Notre Dame agreed to staff the school, which opened in September 1912 with eight children.[1] The Valles lived at the mission and the pastor lived at St. Francis Friary. In June 1913 the couple was asked to leave amid rumors of misappropriations of funds caused by sloppy bookkeeping and carelessness in allocating and recording funds. Yet, St. Benedict continued to grow with over one hundred congregants.[2]

Father Stephen Eckert was appointed the first resident pastor in July 1913. African American members embraced the energetic Eckert. He visited the entire African American neighborhood and extended invitations to attend services at the Mission. Eckert soon opened a day nursery and welcomed a practical nurse who volunteered to help with the health needs of the parish. A club room provide recreation for women and girls. An employment service and a small settlement home for women needing safe lodgings was established. The school began to take homeless and destitute boarding students and increased enrollment to as many as five dozen students by September 1916. Students came mostly from Milwaukee and Chicago, but the boarding school also drew students from Minnesota, South Dakota, Iowa, Arkansas, and California.[3] Thus, Eckert’s leadership and charisma provided an array of useful social services and attracted many dedicated people with the expertise to run them.

In September 1920, as enrollments grew, Eckert moved St. Benedict the Moor School to Corliss (now Sturtevant) in Racine County. The Sisters of St. Dominic from Racine leased the property to the Capuchins for one year and took charge of the school. Eckert believed a rural setting was healthier for children. To him, gardening and farming built responsibility and a wholesome character, and removed children from city vices. The Corliss location, however, was a fiasco. Despite his energetic fundraising, Eckert could not raise enough money to purchase the property. In the process he neglected supervising the boarding school. Staffing was insufficient, donations decreased as did the school’s enrollment. In 1921 the school moved back to Milwaukee under the direction of Father Sebastian Schaff. The Dominican Sisters continued to staff the boarding school at that location. From 1922 to 1950, Father Philip Steffes assumed the dictatorship of an increasingly vibrant school. Eckert, on the other hand, continued fundraising and conducted missions, retreats, and Forty Hours’ devotions until his sudden death in February 1923.

The growing congregation soon came to include a full square block bounded by Ninth Street, Prairie (Highland) Street, Tenth Street, and State Street. This expansion and a desire to build a new church triggered a major dispute with city officials. Fueled by racist concerns, they feared a black mission would detract from the nearby civic center under construction. The Capuchins prevailed, however, and a new church was approved in 1923.[4]

St. Benedict owes much of its success to the generosity of Ernest G. Miller, president of the Miller Brewing Company, who provided large donations for the new church. In 1924 the Jesuits wanted to move Marquette Academy, located between Tenth and Eleventh Street and State and Prairie (Highland), elsewhere. Miller seized the opportunity and purchased the school for St. Benedict’s. In 1925 Miller died unexpectedly, leaving the parish $200,000.[5]

In 1926 Steffes put together plans for a two-year commercial high school serving both boarding and day students, an institution that later expanded into a four-year high school. Steffes hoped to provide a haven for students from distressed families as well as from a racist society.

Another important feature of the Catholic Church’s outreach to the African American community included medical care. Although Milwaukee County Hospital provided medical care to the poor, it was overcrowded and inaccessible for many. Some private hospitals accepted a limited number of poor African American patients who faced white prejudice and segregated facilities. In January 1925 Steffes promoted the idea of a hospital for African Americans. In 1931 St. Anthony Hospital opened as Milwaukee’s first fully integrated, private hospital staffed by the Franciscan Sisters of the Immaculate Conception. As the years passed, St. Anthony continued to expand, providing 125 beds by the postwar period.[6] However, by the 1950s and 1960s the hospital faced challenges. To be competitive, the hospital needed to expand its size, update its amenities for patients, and renovate existing facilities. Furthermore, the hospital became more isolated as the African American population moved farther north and west, and the city planned for an expressway on the west end of the Mission. The hospital closed in the late 1980s.

St. Benedict the Moor nurtured a vital African American Catholic spirituality as well as supported its people as they faced racism in the larger world. African American priests gave parish missions, retreats, and Forty Hours’ devotions. In the school, the sisters combined high standards with a genuine affection for the children. Sports, drama, music, art, and public speaking instilled confidence in its students. St. Benedict dealt squarely with African American identity and racial pride. In the 1930s, decades before other religious institutions, the mission and its school observed Black History Week and offered courses in African American history and literature.

The Great Migration of the 1940s and 1950s led to a dramatic growth in the African American community, and many moved into new neighborhoods. In the postwar era the Church shifted its emphasis to ministering to African Americans in integrated parishes and school communities. St. Benedict’s school population declined and in 1954 it discontinued the boarding school. Over the course of the mid-to-late 1960s, first St. Benedict’s high school closed, followed shortly thereafter by its grade school.

Today St. Benedict the Moor is a parish deeply involved in social outreach. It provides a daily meal program for the needy and homeless as well as prison ministry at the Milwaukee County Jail across the street from the parish.

Bittle, Celestine N. A Romance of Lady Poverty: The History of the Province of St. Joseph of the Capuchin Order in the United States. Milwaukee: Bruce Publishing Company, 1933.

Vietoris, John. “A Golden Opportunity for Reaping a Harvest of Souls: A History of the Ministry to African American Catholics in Milwaukee, 1908-1963.” Ph.D. diss., Marquette University, 2009.