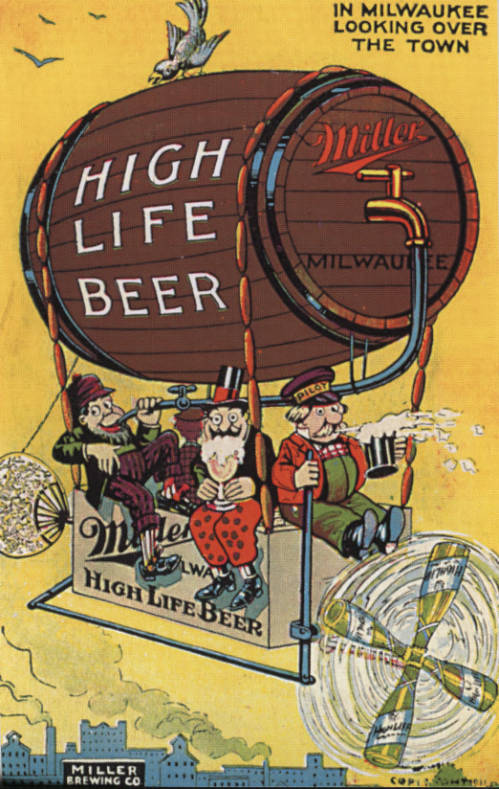 The Miller Brewing Company is one of Milwaukee’s historic brewing giants, operating in the city from 1855 to the present. A relatively late bloomer compared to other local rivals, Miller was an important innovator in national beer marketing, a significant developer of light beer, and the last of the city’s brewing giants remaining from the nineteenth century.

The Miller Brewing Company originated as Frederick J. Miller’s Plank Road Brewery, established near what is now 41st and State Streets in 1855. An experienced brewer from Riedlingen, Wurttemberg, Miller purchased the Plank Road Brewery and beer gardens of Charles and Lorenz Best.[1] Although it was a few miles away from Milwaukee at the time, the brewery’s location in the Menomonee River Valley proved ideal for Miller’s purposes. A large adjacent bluff allowed plenty of space for expanding the lagering cellars that the Best brothers had already started; nearby natural springs provided clean water; the river yielded plenty of ice; hops and barley could be easily obtained from surrounding farms; and the old Watertown Plank Road and later railroad connections allowed easy access to Milwaukee and surrounding towns.[2]

Miller established a saloon in his new brewery, which became a favorite stop for traffic on the Watertown Plank Road. He also opened a new beer hall downtown at Mason and Water Streets in 1857, as well as the old beer garden on the bluff above the brewery in 1858—significant outlets that helped him secure a share of the local market.[3] Miller also joined other major Milwaukee brewers in expanding sales to nearby Chicago and other large urban markets by the late 1850s and 1860s.[4]

Miller industrialized, expanded, and updated his facilities through the 1870s and 1880s, growing his brewery into a multi-building complex that spread across Watertown Plank Road, changing the name to the Menomonee Valley Brewery in 1873.[5]

Miller’s business strategy focused on strengthening sales in Milwaukee, Chicago, and other markets throughout Wisconsin and neighboring states.[6] Miller established a network of tied houses and other retailers in Milwaukee, Chicago, northern Wisconsin, Michigan’s Upper Peninsula, and Minnesota.[7] The brewery became the city’s fifth largest by 1886, and fourth largest by 1887.[8]

The business incorporated as the Fred Miller Brewing Company in 1887, with Frederick J. Miller as president and his son Ernest as secretary-treasurer.[9] Ernest took over leadership after his father died in 1888, and the Miller family remained in control of the company for two more generations.[10]

The company expanded and updated its operations in the Menomonee River Valley through the 1890s until the onset of Prohibition, adding new stockhouses, bottling and refrigeration facilities, and a more ornate tavern.[11] In 1903, the company introduced its flagship brand, “Miller High Life,” which they began billing as “The Champagne of Bottled Beer” and advertising with the iconic “Girl on the Moon” in 1907.[12]

Miller restructured its operations to survive Prohibition, producing malt syrup, sodas, and near beer, among other items. The company also developed other interests outside of brewing, including Oriental Realty, formed to manage and redevelop its property holdings, and a wide range of investments in government bonds.[13] The company returned to brewing as the Miller Brewing Company in 1933, with Frederick A. Miller as president.[14]

During the Second World War, the company limited its market to about twenty-five states and whittled its brands down to one: High Life.[15] This planned scarcity and the brand loyalty of returning GIs helped produce a growing national demand for High Life following the war. The company made major investments in modernizing and expanding their operations to facilitate greater production, adding a new brewhouse, stockhouses, packaging facilities, and an administration building.[16] Miller Brewing also developed innovative national advertising campaigns in print, radio, and television, and sponsored sports broadcasts and popular national television shows, like the Tonight Show with Steve Allen, the Evening News with Walter Cronkite, and the Mitch Miller Show.[17] Miller Brewing was also instrumental to bringing Major League Baseball to Milwaukee in 1953. Company president Frederick C. Miller helped orchestrate the Braves’ move from Boston to Milwaukee, and the company paid for the installation of a scoreboard and advertising rights in County Stadium.[18]

In the 1960s, the company began a steady expansion of production beyond the confines of its original plant. Miller purchased the neighboring Gettelman Brewing Company in 1961, and purchased breweries in Azusa, California and Fort Worth, Texas in 1966.[19]

After the death of Frederick C. Miller and his son in a plane crash in 1954, and the death of his mother Clara Miller in 1957, the Miller family’s interest in maintaining control of the company gradually waned.[20] Lorraine Mulberger, Frederick C. Miller’s cousin and board chair, sold her majority holding to W.R. Grace & Co. in 1966.[21] Tobacco giant Philip Morris purchased Miller Brewing from W.R. Grace in 1969 and the remaining Miller family interests in 1970.[22]

The marketing expertise of Miller’s new parent company vastly improved its prospects in a restructuring national industry. The company refocused the marketing of its flagship High Life brand toward younger, working-class customers with its 1971 “Miller Time” campaign, featuring the slogan, “If you’ve got the time, we’ve got the beer.”[23] The company purchased a reduced calorie “Lite” brand of beer from Chicago-based Meister Brau, Inc. in 1972 and reformulated and reintroduced it as “Lite Beer from Miller” (later Miller Lite) in 1973 with a series of advertisements featuring sports celebrities like Mickey Mantle, John Madden, and Bob Uecker and the popular slogan/debate, “Tastes great…less filling.”[24] Philip Morris updated the company’s Milwaukee headquarters and boosted its geographic expansion, building new, state-of-the-art plants in Fulton, New York; Eden, North Carolina; Irwindale, California; Albany, Georgia; and Trenton, Ohio in the mid-to-late 1970s.[25] Miller Brewing rose from seventh place in the national industry in 1969 to second place behind Anheuser-Busch in 1977—a position it has maintained ever since.[26]

In the 1980s, the company expanded through brand diversification and acquisitions. Introduced in 1986 and 1993 respectively, the company’s Miller Genuine Draft and Icehouse brands employed innovative production techniques to achieve different flavors and alcohol contents from standardized brands.[27] Between the late 1970s and 1990s, Miller also acquired import and domestic brewing rights to several popular international brands, like Lowenbräu, Molson’s, Foster’s, Kronenbourg, and Beamish.[28] The company acquired the Chippewa Falls-based Jacob Leinenkugel Brewing Company in 1988,[29] a number of domestic brands from the bankrupt giant Stroh in 1999, and became a contract brewer for Pabst-held brands in 1998.[30]

In 1996, the company purchased the naming rights to the Milwaukee Brewers’ new baseball stadium, which opened as Miller Park in 2001.[31]

The London-based international brewing conglomerate, South African Breweries (SAB), acquired primary ownership of Miller Brewing from Philip Morris in 2002, creating a new parent company: SABMiller, to bring popular international brands, like Pilsner Urquell and Peroni, into the Miller portfolio.[32] The Coors, Molson, and Blue Moon brands were added when SABMiller and Molson Coors agreed to merge their U.S. operations—Miller Brewing Company and Coors Brewing Company—into a joint venture named MillerCoors in 2008.[33] In 2015, SABMiller announced their merger with Anheuser-Busch InBev SA/NV, as well as the sale of their interest in MillerCoors and rights to the Miller brand name to Molson Coors.[34]