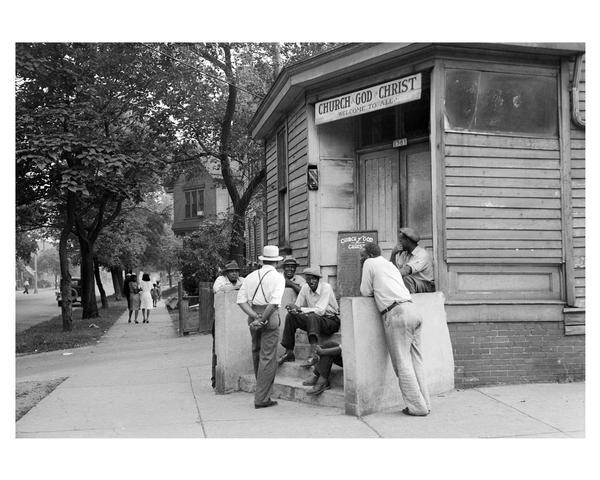 In 1906, the Azusa revival began within the holiness community of Los Angeles. Although this nearly three-year revival was not the first modern Pentecostal gathering, it was an important moment for the expansion of the movement.[1] Known for its charismatic services, faith healings, and practice of speaking in tongues, the Pentecostal movement spread rapidly across America’s racial and ethnic lines.[2] While the movement would influence Pentecostal strains in Catholicism and mainstream Protestantism in the mid-twentieth century, early Pentecostal believers often clashed with other Christian groups and established their own working-class faith communities.[3]

In 2010, over 30,000 Milwaukee-area residents were members of Pentecostal denominations, such as the Calvary Chapel Fellowship; Cleveland, Tennessee-based Church of God; Church of God in Prophecy; Church of Our Lord Jesus Christ of the Apostolic Faith; United Holy Church of America; United Pentecostal Church International; and Vineyard USA.[4] With about 18,0000 and 12,000 members, respectively, the historically white Assemblies of God and the historically black Church of God in Christ (COGIC) accounted for the majority of Milwaukee Pentecostals.[5] In 2016, there were thirty-six Assembly of God churches in the greater Milwaukee area.[6] Bishops presiding over all three Wisconsin COGIC jurisdictions (First Wisconsin, Third Wisconsin, and Northwest Wisconsin) were based in Milwaukee. Together, these jurisdictions encompassed more than 150 churches in Wisconsin and northern Illinois.[7]

Despite being the younger of the two main churches, the Assemblies of God was the first to arrive in Milwaukee. In 1907, minister Cyrus B. Fockler was invited to hold a service in the city.[8] Though he only stayed for a short while, Fockler was credited with the miraculous healing of a local woman, and his reputation spread throughout the community.[9] In 1909, he returned and founded the Christian Assembly (later the Milwaukee Gospel Tabernacle).[10] In the following year the community constructed its first building on the city’s North Side.[11] In 1914, Fockler was elected one of the executive presbyters at the Hot Springs, Arkansas meeting which resulted in the organization of the Assemblies of God.[12] Although Fockler left the new communion, the Milwaukee Assemblies of God grew, especially in the city’s European immigrant communities. The Bethel Tabernacle, founded by Hugo Ulrich, served Milwaukee’s German-speaking population.[13] Healed at one of Bethel’s German services, professional violinist Joseph Wannenmacher opened a Hungarian Assembly of God congregation in 1921.[14] In the 1940s, Yugoslavian and Polish Assembly of God churches appeared in Merrill Park and Walker’s Point respectively.[15]

Within Milwaukee’s expanding African American community, the Church of God in Christ was the dominant Pentecostal church. Although it did not arrive in Milwaukee until the Great Migration, the Church of God in Christ, incorporated in 1907, was one of the first Pentecostal denominations.[16] The early COGIC communion ordained ministers of all races, but many of its white ministers left COGIC to found the Assemblies of God.[17] In the 1920s, Southern missionaries, many of them lay women, established churches in Northern industrial cities to minister to the growing communities of African American migrants.[18] By 1921, Milwaukee had its first Church of God in Christ under the leadership of Elder Leonard D. Ware.[19] Within five years, there were at least four COGIC churches in Wisconsin and the COGIC community was hosting a large summer camp meeting.[20] Joseph R. Anderson, organizer of the camp meeting and COGIC overseer for the state of Wisconsin, was among the first Pentecostal evangelists to Milwaukee.[21] Arriving sometime between 1919 and 1924, tradition holds that Anderson and his family initially stayed in a park and with friends until they were able to convert a former fish market on 6th Street and Vliet Street into their first storefront church.[22]

Stories of meager resources and humble accommodations were common in the early Pentecostal churches.[23] Fockler’s and Ulrich’s Assembly of God congregations both met in borrowed spaces before moving into their first church buildings.[24] In 1947, COGIC Third Jurisdiction Bishop J.C. Williams began his Holy Tabernacle COGIC (now the North Side’s Williams Temple) in his home.[25] Small and storefront churches remain a significant portion of Milwaukee’s Pentecostal churches in the twenty-first century.[26]

Despite these humble origins, several of Milwaukee’s Pentecostal churches have grown into large institutions. As Milwaukee’s suburbanization and white flight changed the city’s demographics in the mid-twentieth century, many of the city’s Assembly of God congregations moved out of the central city into new, larger buildings. Sherman Park’s Parklawn Assembly of God (moved and renamed in 1957) and Brookfield’s Victory International Fellowship (originally Brookfield Assembly of God, building dedicated in 1974) trace their roots to Fockler’s original Christian Assembly.[27] In 1963, Joseph Wannenmacher’s flagship Calvary Assembly of God (now Honey Creek Church) moved to Wauwatosa and his South Side congregation rebuilt in Oak Creek four years later.[28]

While many of the region’s COGIC churches remain within the city, they have also expanded in size and services. To house growing congregations, COGIC churches including Christian Faith Fellowship, Mason Temple, and Greater Mount Sinai, all located on the Northwest Side, have built new buildings since the year 2000.[29] The Holy Redeemer COGIC campus, seat of First Jurisdiction of Wisconsin Bishop Sedgwick Daniels, has expanded to include low-income housing, a credit union, a Boys and Girls Club, private and charter schools, and various community services.[30] Northwest Wisconsin Jurisdiction Bishop C.H. McClelland administers the Word of Hope social service and educational outreach from Holy Cathedral COGIC in Sherman Park.[31]

Traditionally, both the COGIC and the Assemblies of God focused on the hope of heaven and limited their involvement in earthly social and political movements.[32] For the COGIC community, this stance began to change during the Civil Rights movement.[33] Although COGIC leaders were not as involved in the movement as were leaders of Milwaukee’s Baptist and AME churches, two COGIC churches hosted Freedom Schools during the 1960s.[34] A 2014 study by the Pew Research Center found that, while more Pentecostals identify as conservatives than as liberals, they are divided between Republicans and Democrats. Members of historically black Pentecostal churches, such as COGIC, are more likely to consider themselves Democrats or Democratic leaning, while evangelical Pentecostals, such as Assembly of God members, are more likely to favor Republicans.[35]

White, Calvin, Jr. The Rise to Respectability: Race, Religion, and the Church of God in Christ. Fayetteville, AR: University of Arkansas Press, 2012.