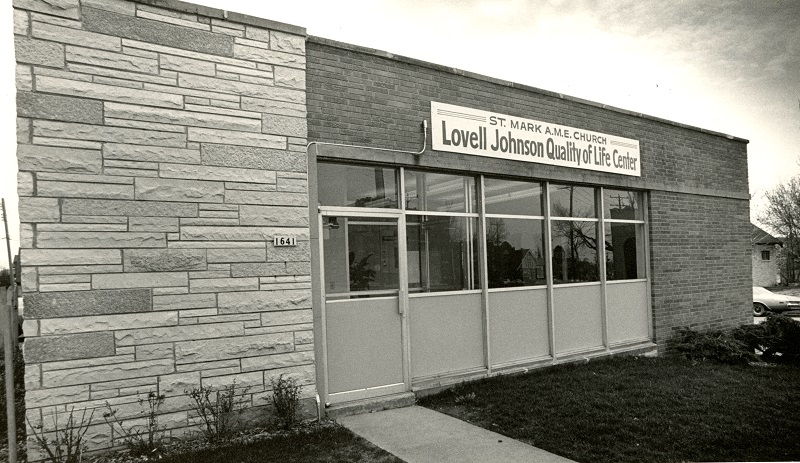 In Milwaukee, there is a heavy concentration of African American churches in the northwest corner of the central city, in an area roughly bounded by Locust and Brown streets on the north and south, and 7th and 29th streets on the east and west. The creation of this religious landscape is indelibly linked to the Great Migration and to programs that contained African Americans in segregated areas in the urban North.

During the Great Migration, millions of African Americans left Southern rural towns governed by Jim Crow for northern cities such as Milwaukee. The cultural landscape of the South during Jim Crow was created around the principles of an identifiable, immediate, and oppressive power often dramatized in the spectacle and torture of lynching and burning rituals.[1] It was also identifiable in the physical landscape through the official segregation of neighborhoods and public spaces that allowed for easy monitoring of the African American community.[2]

Out of this power-operated cultural landscape, the African American community developed spaces as refuges from random harassment and unchallenged violence. The role of the church within the black community offers a key example of how they constantly renegotiated and undermined segregation. On a secular level the church served as a social and community center, providing a safe gathering space. On a spiritual level the church played numerous roles: giving comfort to those pressed down, serving as an arbiter of morals, and in some cases, serving as impetus for social and economic reform.[3]

While Baptist and Methodist churches were prevalent churches after Reconstruction, sanctified religion consisting of Pentecostal-Holiness churches also emerged as a popular form of worship among African Americans. The sanctified church preserved music traditions and ecstatic praise associated with slave religion. In this regard, it distinguished itself from Baptist and Methodist churches that had begun to imitate cultural and organizational models of a European patriarchy.[4]

The oppressive power exerted in the South ignited a transplantation of rural African Americans to cities such as Milwaukee. This “Great Migration” was also facilitated by prospects of a better economic livelihood, as northern cities were experiencing an industrialization phase that required increasing amounts of labor. However, upon arrival in northern cities, migrants continued to face socio-spatial segregation. At the onset of the Great Migration, the black community in Milwaukee was confined primarily to a residential district bounded by State Street on the south, Walnut Street on the north, 3rd Street on the east, and 8th on the west. Employers saw to it that blacks were housed within walking distance of many of their principal employers such as the Plankinton House, and some distance away from their competitors for these unskilled jobs, i.e. the Irish and Italians who lived on the East Side of the Milwaukee River.[5]

With the growth of industry and with the cut-off of immigrant labor from Europe after World War One, thousands more Southern migrants began to arrive in Milwaukee. With the downtown on the south and the relatively expensive housing on the east serving as barriers against black migration into those areas, blacks were pushed slightly north of Walnut Street towards an area dominated by Russian Jews since the 1880s. However, the expanding black residential area did not grow without limit. A de facto program of black containment effectively denied African Americans free access to neighborhoods outside a confined area measuring one half square mile.[6]

The containment of blacks within this segregated area also facilitated a prevention of penetration into the social and economic walls of the city. Thus, as with other Northern cities, Milwaukee’s black community began to create institutions to support themselves. The church was principal among these institutions.

Southern migrants, however, did not affiliate themselves to established Northern black churches that were mostly Baptist and Methodist. It is well documented that regional contrasts created by the Great Migration caused considerable tension within northern churches and often spurred Southerners to start their own congregations. Milton Sernett, writing about Chicago, contends that the diversification of the religious landscape

was in large part brought about by the religious preferences of migrants from the South and by attempts of the mainline churches to reach out to them. Many migrants found it difficult to adjust from the southern religious ethos to that of the large city churches….While we should not exaggerate the cultural differences between migrants and Chicago’s established black churches, they are important for understating why some newcomers sought to organize their own congregations or felt like spectators rather than family in the established churches.[7]

Similar to Chicago, migrants in Milwaukee sought to carve out their own churches that largely sustained the Southern forms of sanctified worship with which they were familiar. These churches tended to be small and homogenous. Congregants within each church mostly consisted of family members and friends from similar southern towns. These members tended to be pulled towards the North in a “chain like” fashion and subsequently became introduced to a widening community of Southerners.[8] Thus the churches often served as a place of reunion for former Southern community members. The familiarity brought about by the expanding communal network within the church also meant that former neighbors could meet at church to discuss job prospects, housing, and schools for their children.[9] Thus these small scale, church based communities also catered to distinctive social and material needs in addition to spiritual guidance. These churches most often communed in semi-private areas of homes such as living rooms. When the congregation could afford it, storefronts along Third Street and Walnut Street were rented out and used as church space.

The number of such small-scale churches continued to grow well into the 1980s, responding to the steep increase of African American migrants in Milwaukee. Following the years after the World War Two, practices such as blockbusting, racial steering, and redlining helped spur rapid racial turnover and economic decline in central cities throughout the U.S. In central city areas, a symptom of economic depression and racial turnover was an abundance of vacant storefronts, storefronts that subsequently became available for churches to purchase relatively cheaply. Churches continued to respond as urban subcultures to this steep increase of density, and they found opportunity in the dozens of freed-up, cheaply acquirable spaces along streets such as Center Street, Burleigh Street, North Avenue, and Fond du Lac Avenue. Thus the production of a dense landscape of churches concentrated within central city areas was in large part a spatial result of a system of racially coerced, unequal capitalist accumulation and land use patterns that was exercised in Milwaukee and several other cities throughout the United States.