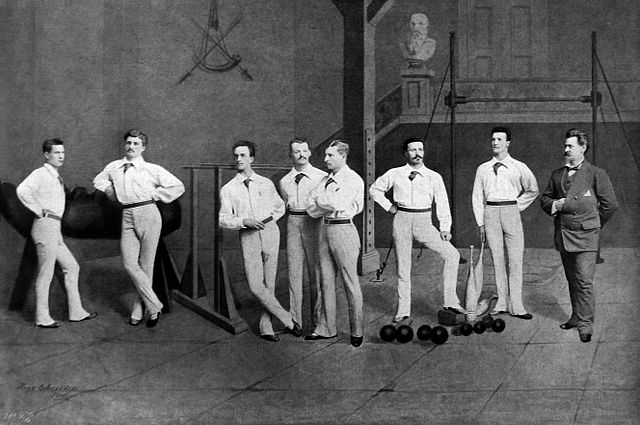 Turnen is simply the German word for gymnastics, but the Turner movement has been defined by its compelling combination of physical exercise, cultural activity, and civic engagement. The German-American group played a leading role in the public life of Milwaukee, especially in the late nineteenth century. At that time, an estimated one in twelve Milwaukeeans lived in families with ties to the organization,[1] and eight different chapters served the city.[2] At least six additional clubs once existed in Washington and Ozaukee counties.[3] “The Milwaukee Turners” is the official name of Milwaukee’s oldest and largest chapter, which still survives.[4] It is best known for its historical connections to socialism and the event venue at Turner Hall.

Turners combined physical training, culture, and politics from the start. In 1811, Berlin schoolteacher Friedrich Jahn began using gymnastics to prepare young German men covertly for armed resistance to the French occupation. After the Napoleonic Wars, the organization Jahn founded continued to foster German cultural nationalism. Most Turner chapters also supported uniting the divided German states under one democratic government, and some agitated for broader social reforms.[5] Many prominent participants in the German Revolutions of 1848 were members, so there were Turners among the refugees who left for the United States when the uprisings failed.[6] One of those exiled revolutionaries, Cincinnati resident August Willich, prompted the establishment of the Milwaukee Turners in 1853.[7]

Turner gymnastics, which consisted of distinctive calisthenics routines and apparatus exercises, was the centerpiece of the group’s activity. Masculine strength and agility were especially valued, but the Milwaukee Turners also provided classes for children and, beginning in the 1880s, women.[8] Gymnasts from Milwaukee competed successfully in tournaments, winning the most awards at the 1880 Turnfest in Frankfurt, Germany. Their celebrated trainer, George Brosius, directed the national college for Turner instructors, which was based in Milwaukee from 1875 to 1889 and from 1892 to 1907. In 1875, Brosius was also instrumental in making a Turner-style exercise regime the first systematic program of physical education in Milwaukee’s public schools.[9]

Turners saw no sharp division between their physical and cultural endeavors. Their organization was quickly recognized as Milwaukee’s “center of intellectual [geistig] life for citizens of German descent.”[10] Immigrants could attend German-language plays, concerts, or lectures, and socialize at balls, picnics, or at the bar.[11] Men dominated these events, but women attended and provided indispensable support, forming their own auxiliaries beginning in the 1880s.[12] Turners also provided highly visible displays of German pageantry and prowess at civic events and festivals. Milwaukee hosted national Turnfests in 1857, 1877, and 1893.[13] From 1868 to 1896 new chapters formed, and in 1883 the Milwaukee Turners opened a grand new hall on Fourth Street designed by German-born architect Henry C. Koch.

Ethnicity remained important after 1900 despite waning immigration, declining membership, and some chapters closing their doors.[14] When the United States entered World War I, the Milwaukee Turners made US citizenship a requirement of membership, but it continued to keep meeting minutes in German until the mid-1920s.[15] By 1940, the Milwaukee Turners was the only chapter left in the city, and the German language could be heard at its events only “on rare occasion.” Yet German-American history and culture remained a regular feature in the Milwaukee Turner magazine into the 1960s.[16] Since then, the strategy of promoting Turner Hall as a cultural resource has highlighted the group’s ethnic past.[17] Turner Hall was listed on the National Registry of Historic Places in 1977 and designated a National Historic Landmark in 1996.[18]

Politics has proven more divisive than gymnastics or ethnicity. Turners have not always agreed on how to interpret the progressive principles summarized in one of their mottos: “Liberty, against all oppression; tolerance, against all fanaticism; reason, against all superstition; justice, against all exploitation!”[19] Initially, Turners vehemently opposed traditional religion, and few observant Catholics or Lutherans joined.[20] Over time, religious “tolerance” became a more inclusive ideal, but Turners continued to campaign against restrictions on alcohol consumption and Sunday amusements.[21] Women’s rights were a low priority. Feminist Mathilde Anneke addressed Turners during the 1870s, but the national organization did not grant women full membership until 1904, and Milwaukee Turners declined to host a pro-suffrage speaker as late as 1912.[22]

Most Turner chapters around the North opposed slavery, but Turners in Milwaukee were divided.[23] Some active members, such as educator Peter Engelmann and editor Bernhard Domschcke, were strong critics of the institution, but other Turners were Democrats who favored compromise.[24] When the Milwaukee Turners finally endorsed the Republican Party in 1860, a group of members quit in protest.[25] Fighting to preserve the Union was less controversial, partly because it provided an opportunity to showcase German manhood.[26] Enlistment was so high that Turner activity briefly stalled, and twenty-five members of the Milwaukee Turners died in the war.[27]

In the postwar decades, Turners in Milwaukee became more involved in socialist politics. For a brief period in the 1870s, socialist Joseph Brucker edited the Milwaukee-based organ of the national Turnerbund.[28] Socialists aired their views in Turner meetings and used Turner facilities free of charge.[29] In 1889, the South Side Turners elected Victor Berger leader, and in 1898 Eugene V. Debs spoke at Turner Hall.[30] Yet elite German Americans such as the Uihlein brothers, Frederick Pabst, and Republican mayor Emil Wallber were also Turners, and they sometimes complained about the socialists.[31] After the 1886 Bay View Massacre, three chapters passed resolutions siding with authorities.[32] In 1911, the Milwaukee Turners passed a resolution congratulating Socialists on their recent electoral victories, but by only a slim majority.[33]

The relationship between the Milwaukee Turners and socialism was closest during the mayoralty of Frank Zeidler from 1948 to 1960.[34] Zeidler was a Turner who had formerly edited the Milwaukee Turner, and he continued to contribute articles while in office. The periodical supported measures “subordinating individual and corporate privilege to the general good,” such as Social Security and collective bargaining.[35]

Today, leaders of the Milwaukee Turners take pride in their socialist past, but they implement Turner principles in less partisan ways. The Milwaukee Turners holds occasional lectures and was a founding co-sponsor of Fourth Street Forum, a current affairs show that aired between 2002 and 2015.[36] It still provides athletic facilities, including a rock-climbing wall, while the Turner Ballroom Preservation Trust oversees the restaurant and space dedicated to cultural performance.[37]

Hofmann, Annette. The American Turner Movement: A History from Its Beginnings to 2000. Indianapolis, IN: Printing Edge, 2010. 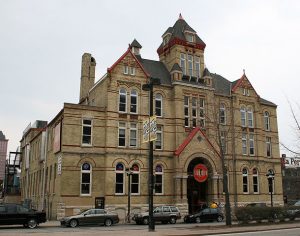