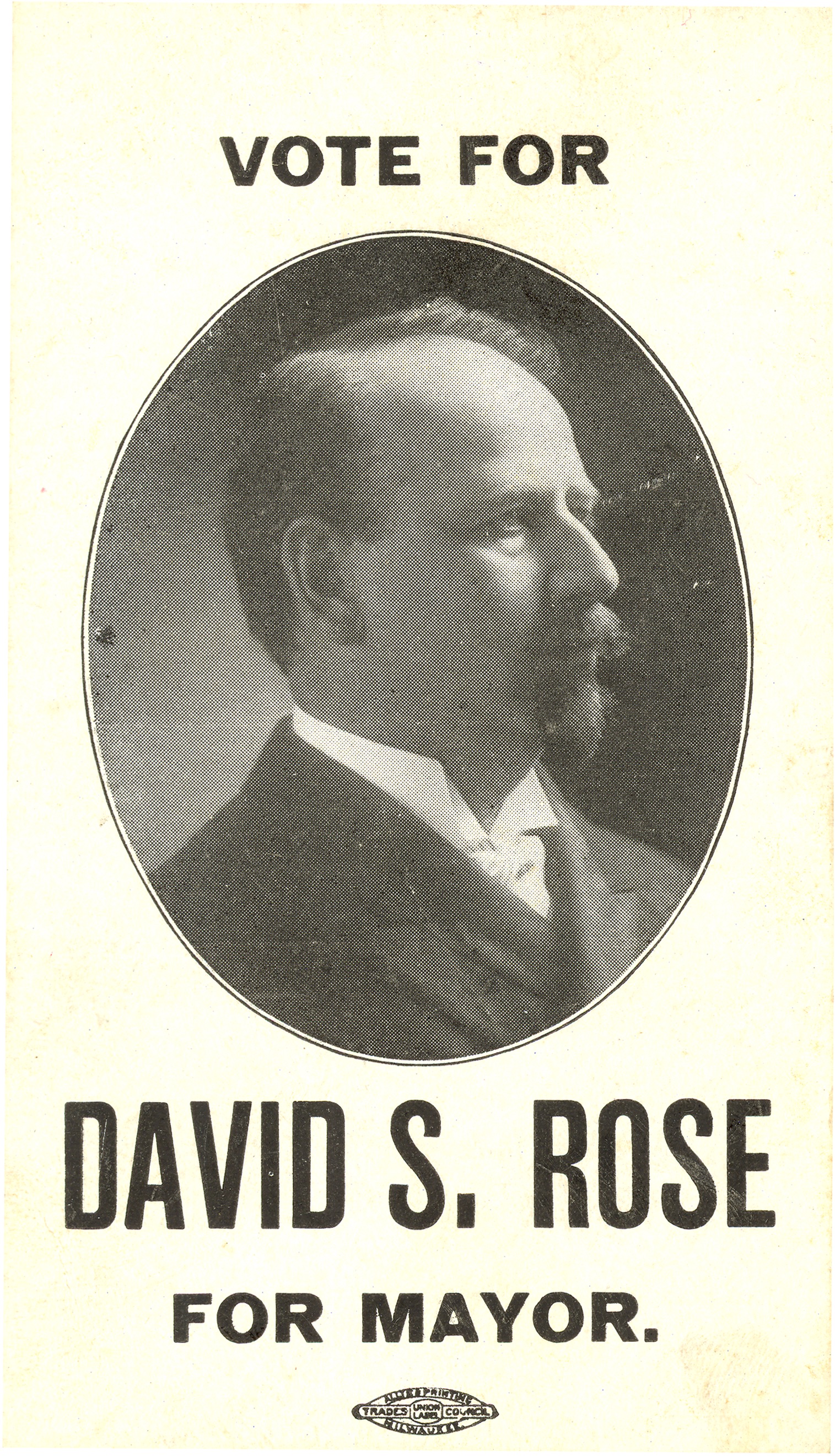 Born in Darlington, Wisconsin on June 30, 1856, David Stuart Rose studied law and joined his father’s legal firm when he was twenty years old. In time, he served as mayor of Darlington and as a Lafayette County judge before moving to Milwaukee in 1888. There he spent years building up his own law practice prior to making a bid for mayor in 1898.[1] Rose’s platform appealed to both Populists and Democrats at a time when the two parties’ agendas briefly overlapped. Campaigning for municipal control of utilities, transit rate regulation, and an end to corruption in civil service, Rose won by making himself the candidate for working men.[2] His slogan, “All the Time Rosy,” highlighted his enthusiasm for civic celebrations and cultural festivals, and his commitment to bringing tourist dollars to the city by making it a lively destination. He appealed to Milwaukee’s ethnic voters, whom he courted accompanied by his Catholic wife, while denouncing “godless socialism” before South Side Polish, Irish, and German voters. More than one priest was known to give his pulpit over to this charismatic campaigner. Rose was “chameleon-like,” appearing in a Prince Albert coat and top hat for one audience, and dressing as a workman before others.[3]

Above all, Rose was a pragmatic politician who believed that stubborn adherence to any principle at the expense of winning elections was foolish. Thus in January 1900, he brokered a backroom deal in which he reneged on his 1898 promises regarding city ownership of electric streetcars and power distribution. The mayor furtively granted a thirty-four year franchise for those services to a private company despite a public outcry against the ordinance.[4] Moreover, campaign promises to clean up corruption and vice soon gave way to Rose’s natural antipathy toward temperance and moral reform; under Rose, Milwaukee’s red light districts, late-night saloons, and gambling dens were subject to containment, not attack. These policies earned him the moniker “David Roach” among Progressives and Socialists. However, Rose’s likeability and political acumen won him five mayoral elections in 1898, 1900, 1902, 1904, and 1908.[5]

Rose was the subject of a grand jury probe that investigated him for “irregularities bordering on extortion” during the “graft trials” of the early 1900s.[6] Although he escaped prosecution, he became politically tainted as aldermen, county officials, and bureaucrats associated with him were indicted for corruption. In a political climate where Republicans and Democrats were evenly matched and where Socialist candidates held growing appeal, Rose’s popularity waned by 1906, when he lost to Republican Sherburn Becker. He rallied again to win in 1908, but the 1910 election went to Socialist Emil Seidel. After a brief retirement in Arizona, where he owned a copper mine, Rose returned to Milwaukee politics in 1924. He lost that mayoral election to another socialist, Daniel Hoan. Ultimately, memories of the corrupt “open town” during the mayor’s long tenure turned many Milwaukee voters against him. Rose died on August 8, 1932.[7]

Rose, David S. Paradise and Hell! Saints and Hypocrites, Politics, Parties and Leaders of the Past and Present: Fifty Years in Political Life: Travels and Experiences in China and South America. n.p.: n.p., 1990.