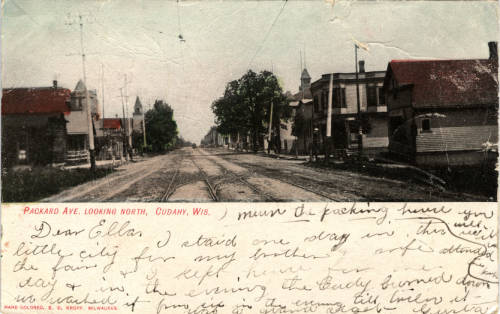 Located in Milwaukee County, just east of Milwaukee’s southernmost portion, the suburban city of Cudahy was named for city founder and meatpacker Patrick Cudahy. Cudahy is bordered by St. Francis to the north, General Mitchell International Airport to the west, Lake Michigan to the east, and Oak Creek and South Milwaukee to the south. The city is run by a mayor and common council consisting of five aldermen.[1] Cudahy had a population of 18,267 in 2010.[2]

The railroad stop around which Cudahy emerged was originally known as Buckhorn.[3] Following the 1838 division of Milwaukee County, the Buckhorn area was located in the Town of Lake. Buckhorn, like Milwaukee, had been home to the Potawatomi prior to the 1833 treaty which ceded southeastern Wisconsin to the United States government. Farmers from the northeastern United States began to settle in the region in 1835, even before the 1838 departure of the Potawatomi. Barney M. Eaton, Sr. and Zebedee Packard were among the first white settlers in the Town of Lake. Packard Avenue, the main business street of Cudahy, is named for Zebedee’s son, Daniel. Eaton’s son, Barney, Jr., became the first president of the Village of Cudahy.[4]

At the end of the nineteenth century, the Cudahy Brothers Company, under the leadership of Patrick Cudahy, actively built up Cudahy. After purchasing John Plankinton’s Milwaukee meatpacking business in 1888, Patrick Cudahy and his partner and brother John Cudahy decided to move their plant from the Menomonee Valley out of the city.[5] The Buckhorn area provided vital access to both Lake Michigan and the Chicago and North Western railroad.[6] On November 1, 1893, the Cudahy Brothers Co. finished construction of its Cudahy plant.[7] To accompany the plant, Patrick Cudahy sought to bring all of Milwaukee’s meatpacking industry to a central stockyard at Cudahy. He advocated for a Milwaukee city ordinance prohibiting meatpacking plants within the city limits. Cudahy Brothers Company’s competitors opposed such an expulsion from their Milwaukee factories, and the proposed ordinance was defeated.[8]

Other industries did open in the Cudahy area, however, and as employees relocated to the Town of Lake, the Village of Cudahy was incorporated in 1895. By 1906, Cudahy met the state’s population requirements for becoming a city.[9] The early residents of Cudahy were predominantly laborers, and many were immigrants. While many ethnic groups were represented in Cudahy, the largest populations were Polish and German.[10] In addition to the Cudahy Brothers Co., early major employers included Red Star Yeast, Federal Rubber Company, and Ladish Company. Both Patrick Cudahy, LLC, the successor to Cudahy Brothers Co., and Ladish Company continue to be among Cudahy’s largest employers. [11]

The Cudahys were heavily invested in the city that bore their name. In addition to owning the meatpacking company, Patrick Cudahy purchased about 700 acres of land in Cudahy. He resold some property to his employees and other newcomers. Many of Cudahy’s residents built their homes with loans from the Cudahy Building and Loan Association (of which Patrick Cudahy was the first president), while others bought houses built by Patrick Cudahy’s other businesses. A 1921 Cudahy Brothers Co. newsletter claimed that half of all houses built in Cudahy had been built by the Cudahys, with 95% of these paid for with installment plans.[12] Some of these early homes, so-called “Cudahy Cottages,” were built in sections. The family lived in a tall basement during completion of the upper floors of the home.[13] Many current residents of Cudahy continue to live in duplexes and bungalows built in the early twentieth century. While these residences were especially suitable for families, temporary and transient laborers in early Cudahy often lived in boarding houses.[14]

Patrick Cudahy’s influence within the city extended beyond real estate. Although he never lived in Cudahy himself, Patrick Cudahy dominated local affairs. The city founder laid out Cudahy, naming many of its avenues in honor of his business associates and influential meatpackers. Through his company, Patrick Cudahy supplied the city’s water.[15] Cudahy was not a true company town, however, and Patrick Cudahy’s influence was not without limit. He clashed repeatedly with city government. Although he was certainly underestimating his power, Patrick Cudahy claimed in his autobiography that if he took sides in a Cudahy election or asked “for ever so small a favor from the common council, [he was] sure to be turned down.”[16]

After World War II, Cudahy expanded from its original boundaries through three annexations of adjacent territory. Since 1895, Cudahy’s borders extended from Lunham Avenue in the north to Grange Avenue in the south, and west from Lake Michigan to Barland Avenue. In 1948, a group of residents of the Silverdale area (located in the Town of Lake to the south of Cudahy between Grange Avenue and College Avenue) petitioned for annexation by Cudahy. This move, motivated by fear of annexation by Milwaukee, met stiff opposition from other residents of Silverdale. Many residents opposed to the annexation wanted the Town of Lake to incorporate as its own city, rather than be partitioned between its neighbors.[17] After a two-year legal battle, Silverdale was annexed to Cudahy on April 17, 1950. Cudahy’s later annexations were much less controversial. On December 20, 1952, Cudahy annexed land to the west, thereby extending its boundary to the airport. Two years later, on November 3, 1954, Cudahy arrived at its current borders after annexing a small strip of land south of Layton Avenue over which the city of Milwaukee had dropped its prior claim.[18] 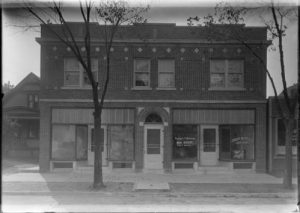 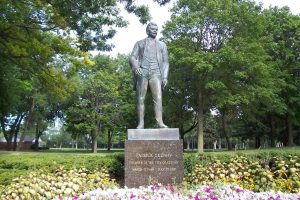