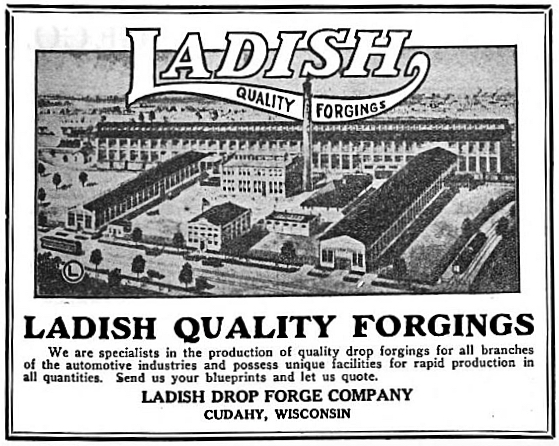 For over one hundred years Ladish Company has engaged in the age-old practice of forging metal into a variety of finished products. Innovative application of such technology made the company one of the foremost forge shops in the country, and modernization of the basic process made Ladish a key supplier of aerospace parts. In addition, the scale of their equipment helped them to remain a fixture in Cudahy to this day, in spite of several economic downturns throughout their history.

The company originated in 1905 when American Malting Company supervisor, Herman Ladish, sought a solution for persistent machine problems. Ladish approached John Obenberger, who ran a local forging shop, to address the matter and walked away with a new business partnership.[1] Obenberger and Ladish initially produced small metal parts, particularly for automakers.[2] The company moved to Cudahy in 1912 in order to accommodate its need for more production space and—reflecting Ladish’s growing control over operations—changed its name to Ladish Drop Forge Co. in 1917.[3] To supplement its manufacture of camshafts, steering spindles, and other auto parts, Ladish supplied larger steel parts used in Caterpillar construction equipment and John Deere tractors.[4]

While business thrived throughout the 1920s, forge shops—which tend to rely on specialty orders—are vulnerable to market shifts. This was true for Ladish at the onset of the Great Depression when businesses failed by the thousands and orders rapidly declined. To offset the losses, however, Ladish expanded its operations. By introducing a new, standardized fittings division that produced piping as well as adding finishing machinery to its repertoire, the company was able to bring in new business and offer clients a better end product, thus keeping its doors open.[5] As the country inched closer to World War II, Ladish was once again booming, with new government contracts to produce parts ranging from propeller hubs and landing gear to tank pinions and bomb nose cones.[6]

The end of the war threatened prosperity briefly, but a combination of standardized production and technological innovation made the next three decades a period of relative prosperity and growth for Ladish.[7] While their auto parts manufacturing waned, the end of the war brought a return to production of construction and farm equipment as well as finished pipes that could be used for oil extraction.[8] In addition, the company invested heavily in its specialty forge operations. They purchased equipment the government had lent them during the war, leased a giant counterblow hammer, and designed other large equipment which included the world’s largest forge hammer.[9] Such machinery aided Ladish in its pursuit of new contracts in the burgeoning aerospace industry. Their large forge hammers have made them a key supplier of equipment for both commercial and military use.[10]

The recession of the early 1980s marked a turbulent era for Ladish. As clients cut back on orders, Ladish struggled to stay alive. They sold off their fittings division, refocusing their efforts on aircraft parts.[11] The company changed hands several times and ultimately declared bankruptcy in 1993.[12] After steadily carving their way back throughout the 1990s, the company is now owned by Allegheny Technologies (ATI). It retains its position “as a stand-alone business unit” in Cudahy to this day although the firm’s title has now changed to ATI Ladish Company, Inc.[13]