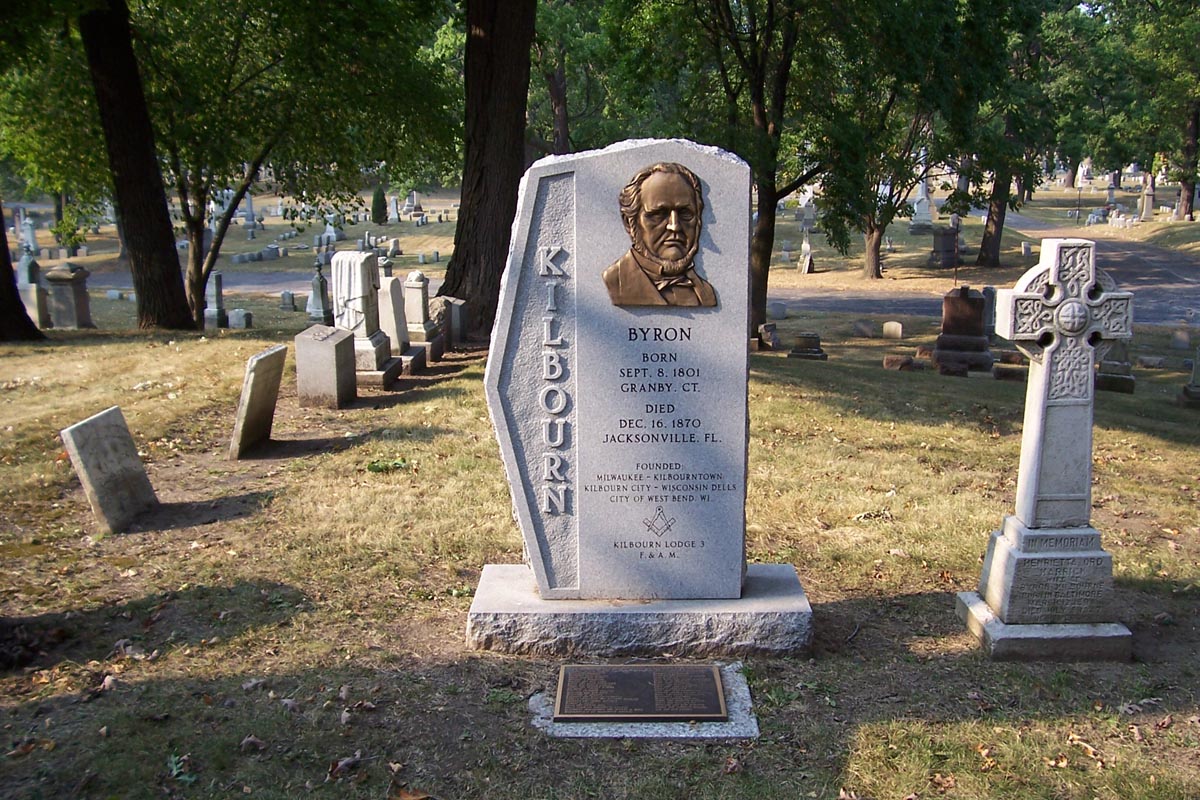 Of the three individuals considered Milwaukee’s founders, Byron Kilbourn could arguably rank first among these icons. Certainly in terms of a metropolitan vision, Kilbourn had the most ambitious and comprehensive dreams of not only what could happen in this part of Southeastern Wisconsin but also, importantly, what it would take to realize such dreams. Foremost, he understood the role of transportation. From harbor facilities to canals, from plank roads to railroads and steamboats, Kilbourn understood the interplay between access and opportunity. His civic mindedness, however, was always tempered by the desire for personal gain and by a hesitation to see success as a team endeavor. In the words of a contemporary, Dr. Lucius I. Barber in 1835, Byron Kilbourn was “a man of strong prejudices and dictatorial disposition, at all times insistent upon having his own way, and consequently not popular.”[1]

Born in Connecticut in September 1801, Kilbourn was raised in Worthington, Ohio, just outside of Columbus, where his father initially had success in manufacturing woolens. Although he received a thorough education preceding his father’s bankruptcy, Kilbourn was forced to enter the full-time work world at seventeen, becoming proficient in the field of surveying, a profession vital to the mapping and subsequently settlement of the Midwest. By the early 1820s, he became deeply involved in one of Ohio’s most important, early industries: the construction and maintenance of canals, particularly in his case the Miami Canal between Dayton and Cincinnati. Yet by the late spring of 1834, he had returned to his earlier profession of surveying, winning a job to help plat the Michigan Territory’s western expanses, a region soon known as Wisconsin.[2]

Over the next few years he traveled extensively between Green Bay and Chicago. Ever restless and always looking for the next investment opportunity, Kilbourn came into contact with land speculators who saw the western end of Lake Michigan as a pivotal transit point between the established regions of the East Coast and America’s seemingly unbounded western frontiers. Whereas a pioneer such as Solomon Juneau favored the east side of the Milwaukee River—given its proximity to Lake Michigan—Kilbourn envisioned a far greater future west of the river where the land (and economic possibilities) ran unbroken, it seemed, to the Mississippi River. At the age of thirty-two and with about $8,500 to invest, Kilbourn became a professional land speculator in 1834, associating in the coming years with notable Milwaukeeans such as Increase Lapham, Archibald Clybourn, and Garrett Vliet. Whereas on the one hand Kilbourn worked assiduously to promote Milwaukee’s land sales and population development, on the other hand he undertook these efforts steadfastly for his own benefit first and foremost. To him, his old friend Solomon Juneau and the latter’s business partner Morgan Martin were the opposition, to be challenged at every point, whether that was the battle over on which side of the river the county courthouse might be positioned, or whose newspaper might become the premier journalistic presence locally, or over bridges connecting the more isolated East Side to the burgeoning West Side or, finally, how the streets from one side of the river might align with their opposites—let along the names for those streets. When it came time for the three settlements along the Milwaukee River to be unified into a single municipality in 1846, Kilbourntown residents endorsed the new charter 347 to 1, unlike the East Siders who opposed this merger by almost a two-to-one margin.[3]

To Kilbourn, transportation was vital—a hereditary consequence, perhaps, of having a maternal grandfather who invented one of the country’s earliest steamboats. In Kilbourn’s mind, Milwaukee had to finesse its geographical situation to compete successfully with Chicago, a potent rival to the south. Kilbourn was an early road commissioner, supporting graded roadways to connect Milwaukee with well-established travel routes such as the Mukwonago Road. Early on, he aggressively promoted federal investment in the harbor of Milwaukee. By the late 1830s, more than two hundred ships annually, both stream-driven and sailing vessels, dropped anchor in Milwaukee Bay. To handle the resulting throng at the chokepoint where the river emptied into the lake—at least until a straight-cut was completed in 1857—Kilbourn built a small paddlewheel steamer to ferry newcomers from the coastline to his settlement at 3rd and Chestnut (today’s Juneau). (It should be noted that no ferry stops were available to disembark arrivals at any point in Juneautown.)[4]

Seeing Chicago’s wisdom in constructing a canal to connect the Chicago River to the Illinois River and thereby access the Mississippi River, Kilbourn envisioned a similar project for Milwaukee. He vigorously promoted a canal with the intent of linking the Milwaukee River with the Rock River and eventually the Mississippi. For a time, both Congress and the Territory of Wisconsin served as allies, although in the end only a mile of the canal was finished. However, the dam built for this canal at North Avenue proved to be an invaluable source of industrial power for decades to come. By the late 1840s, Kilbourn became involved in the planning for the area’s first railroad. Regular rail service ran between Milwaukee and Waukesha by 1851, although Kilbourn’s time as president of the Milwaukee and Mississippi Railroad was over by early the following year. Still, during the following decade, he continued to invest time, talent, and money in subsequent railroad ventures until the Panic of 1857 derailed Wisconsin’s overinvestment in the Iron Horse.[5]

Nothing could blunt Kilbourn’s ambitions and his need to keep busy. What might have been seen as a failure to one man was only a momentary deterrent to the former Ohio canalman. Kilbourn built a flour mill and a grain elevator in the 1850s, developed iron mines in Dodge County, founded a new town along the Wisconsin River that he modestly named Kilbourn City (a designation that lingered until 1931, when it was retitled Wisconsin Dells), and established a college that he just as modestly called Kilbourn University. Although never a politician by nature because of his disinterest in wooing popular acclaim, Kilbourn was elected mayor twice for one-year terms in 1848 and 1854. He was also chosen a delegate to the Wisconsin constitutional convention.[6]

Having projected himself into nearly every local civic effort between the 1830s and 1850s, Kilbourn left the Badger State for health reasons in the aftermath of the Civil War, settling eventually in Florida where he operated a 450-acre citrus farm. He died in Jacksonville of a stroke in December 1870. He remained interred in the Sunshine State until his body was appropriately returned to Forest Home Cemetery (along what was originally the Mukwonago Road) in 1998.[7]