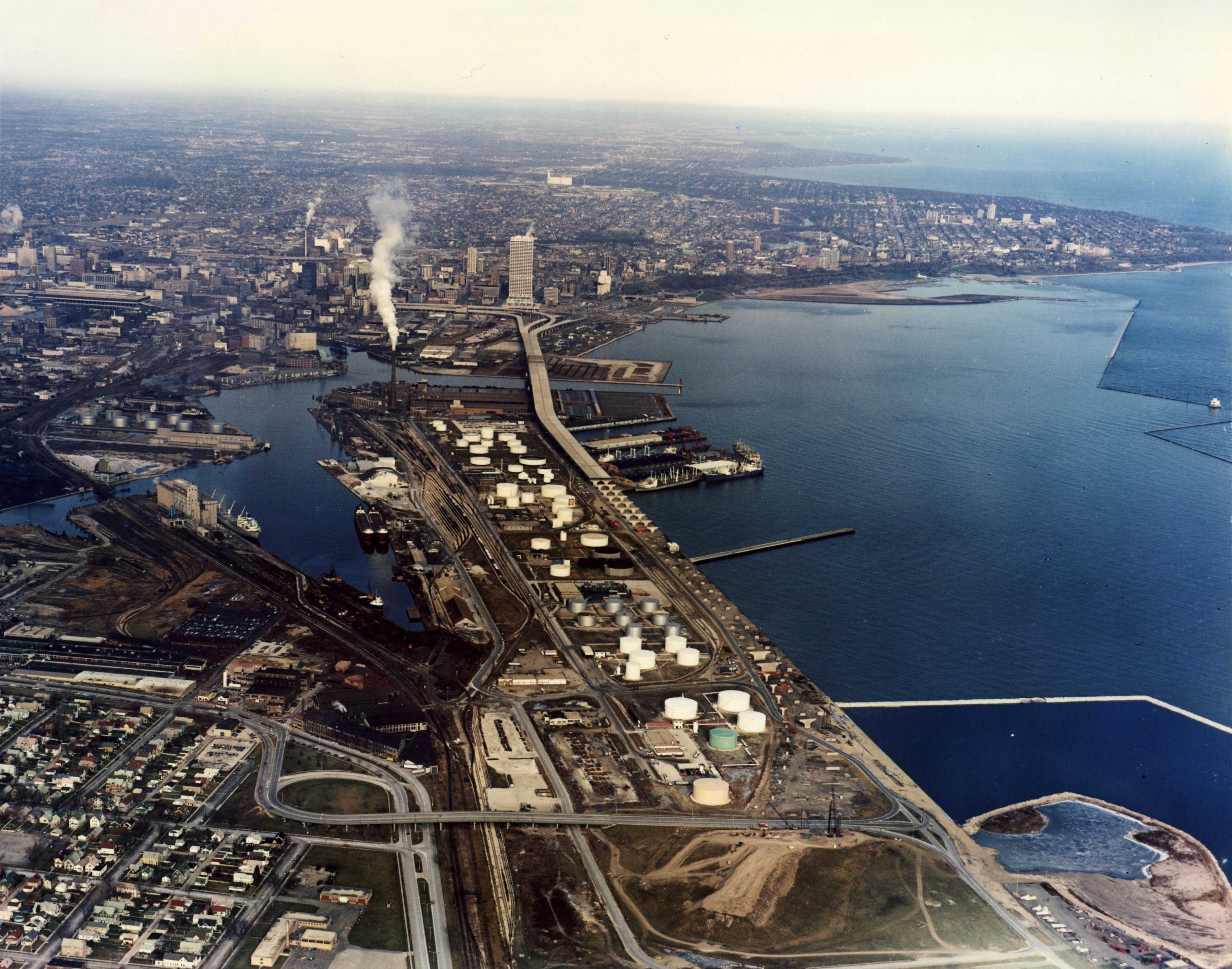 By its very name, Milwaukee references a location intimately tied to the three waterways that course their way through inland expanses before emptying into Lake Michigan. During the Native American era as well as in the early American settlement days, the Milwaukee River, subsequent to its confluence with the Menomonee, angled southward, separated from Lake Michigan by a thin, low-lying peninsula. At the point where this joint flow broke through the peninsula and emptied into the great lake, their waters were joined by the Kinnickinnic River. Only shallow-draft boats could move about this common estuary; Native Americans could fish and harvest wild rice and Yankee Americans brought ashore passengers and freight from larger vessels that were forced to drop anchor offshore. For decades there was no operational inner harbor to permit direct loading and unloading of boats and ships that traveled long distances. This situation—both an inconvenience and a danger—caused locals, from the earliest days of American settlement, to demand that the federal government dredge a “straight cut” to Lake Michigan, closer to the intersection of the Milwaukee and Menomonee rivers. Recognizing that becoming a transportation and trade hub was crucial to the success of burgeoning cities in the nineteenth century, Milwaukeeans worried that the sandbars and silt around the mouth of its three rivers caused them to be bypassed by lake traffic that preferred easier access in Southport (Kenosha) or that budding rival known as Chicago. Federal engineers completed the first land and water surveys of the area in 1837, accompanied by an endorsement of a straight cut at the northern end of the peninsula (historically known as Jones Island), about half a mile above the natural outlet.[1]

For the moment, however, privately-owned piers and boat landings sprang up, extending outward from the mainland into the lake. A maze of hotels and warehouses quickly served these docks, a transportation hub that was conveniently aided by ship-building firms situated along the Milwaukee River and on Jones Island. By 1845, Milwaukee “could boast a ‘fleet’ of one steam and twenty-six sailing vessels.” Nonetheless, given the limits placed upon Milwaukee’s harbor by the reality of Wisconsin’s long winters, local boosters such as Byron Kilbourn were ever mindful of alternatives, including the nascent railroad industry.[2]

Finally, after repeated setbacks in Washington including President James K. Polk’s veto of the Harbor and River Bill in 1846, Congress successfully set aside $15,000 in 1852 for the “straight cut.” In the end, this engineering feat cost nearly $530,000, of which the federal government paid about 16 percent. Completed in late 1857, the “straight cut” fueled the expansion of an already thriving wheat export industry. Within five years, aided by the Civil War’s procurement needs, Milwaukee became the largest primary wheat market in the world.[3]

Milwaukee’s pre-eminence in wheat exports continued for about a decade until competitors such as Minneapolis (situated closer to the newest wheat fields of Minnesota and the Dakotas) cut into Milwaukee’s earlier geographical advantages. However, as industrial manufacturing gained importance locally, the importation of coal became a vital commodity, aided by the expeditious development of belt line tracks around the harbor area. On the other hand, outgoing vessels—increasingly stream-driven—carried finished products from the area’s heavy metal, tanning, and brewing industries, businesses that until the twentieth century were largely situated along the Milwaukee and Menomonee rivers (and nearby canals) as well as in the Walker’s Point manufacturing district. Meanwhile, what remained of the island created by the straight cut became home to a municipal sanitation plant, lumberyards, and a fishing village, consisting mostly of immigrants from the Kaszuby coastline of Poland.[4] Along the northern edge of the harbor’s new entrance, near a municipal incinerator, a long pier was constructed, housing a lighthouse, a foghorn, and a Coast Guard station. This pier, in conjunction with a breakwater extending from the south edge of the “straight cut,” created a secure channel for lake vessels as they entered the port of Milwaukee, either to offload at the steadily evolving inner harbor or head up the Milwaukee or Menomonee rivers where they would discharge passengers, retail commodities, cement, coal, and salt before reloading with grain, leather goods, beer, and the widest variety of specialized metal products for export.[5]

Over the course of the twentieth century, the original estuary was cleared of a residual island, sandbars, and other debris, becoming by the 1930s a fully functional inner harbor. At the helm of these improvements were a set of municipal leaders including William George Bruce, the first chair of the Harbor Commission, and Socialist mayors, Daniel Hoan and later Frank Zeidler. At the south end of the inner harbor, near the original outlet to the lake, the Illinois Steel Company complex developed its own terminals to receive raw materials and to export finished products. Over the decades, improvements to the inner harbor permitted United States Steel (eventually the parent company to Illinois Steel) to winter many of its freighters in Milwaukee, with ships in tightly packed columns. Illinois Steel struggled through the Great Depression, however, allowing the city to acquire this land for future development by 1948. As energy uses changed over time, petroleum farms were built on the landward side of Jones Island as well as on the island itself. To accommodate these upgraded transportation uses, the city removed residents of the Jones Island fishing village using its eminent domain powers.[6]

The “north tract” of the outer harbor, above the channel, remained underused by the railroads until portions became Maitland Air Field as well as a dock for the shipment of automobiles in the 1920s. Then in the mid-1950s, the airport was converted into a Nike missile site. Beginning in 1970 this military site was redeveloped as the home to Summerfest, Milwaukee’s annual super-festival. Subsequent construction of Lakeshore State Park, adjacent to the Summerfest Grounds, occurred largely on landfill created by the digging of the sewer system’s Deep Tunnel.[7]

Along the coastline to the south, an outer harbor, serving both lake- and ocean-going vessels with the most modern terminals, warehouses, rail connections, and heavy-lift cranes, was constructed under municipal management during and after the 1930s. The outer harbor, although not one of the largest in the U.S. based on volume, remains nonetheless one of the most profitable. For example, in 2016 Milwaukee’s port contributed to the movement of 447,000 metric tons of goods through the St. Lawrence Seaway, a 50 percent increase from the previous year as effects of the Great Recession lessened. Between 1985 and 2006, steel imports to the port at Milwaukee skyrocketed from 29,000 tons to 221,000 tons. In recent times, roughly 250 ships a year passed through the port, exchanging loads with 7,000 rail cars and 120,000 trucks. In addition, a cross-lake ferry has developed a dock for both passengers and automobiles at the south end of the outer harbor.

In 2017, the Harbor Commission officially changed its name from “Port of Milwaukee” to “Port Milwaukee,” in conjunction with a new logo and tagline. Plans are afoot to renovate landward portions previously used by Solvay Coke Company. Office space for the area’s burgeoning water technology industry as well as green space and an extension of the RiverWalk are scheduled for property that for decades housed coal piles and coke production plants.[8] Re-conceptualization and renovation remain watchwords for the Milwaukee Harbor Commission as the twenty-first century unfolds. 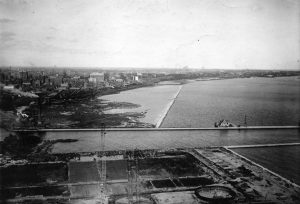