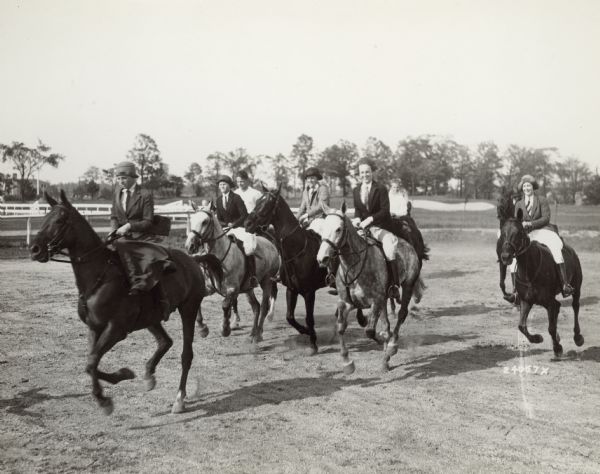 River Hills is a suburb of Milwaukee. It is named for the Milwaukee River, which runs through the western part of the community, and for its rolling terrain. It is considered part of the North Shore, though it is not actually on the shore of Lake Michigan. River Hills was incorporated as a village in 1930. As residents of a village, voters choose a village president and six trustees who serve for staggered three-year terms. The board retains the services of a professional village manager.[1]

Cousins Joel and Cephas Buttles and their families were the first white residents of River Hills. Joel bought 560 acres of land in the Town of Milwaukee in 1843. Three hundred and twenty acres were in what is now River Hills, and the rest was in Fox Point, Whitefish Bay, and Shorewood. Cephas eventually bought half the River Hills land from Joel. Cephas and his wife, Nancy, had eleven children; their son Anson became justice of the peace, county school superintendent, county supervisor, and town clerk. He held the latter post for fifty years.[2]

Many of the early settlers were Dutch, like the Buttles family, but Germans were the predominant group by the 1870s. They were usually farmers, and River Hills remained mostly agricultural until the 1920s, when an influx of wealthy Milwaukeeans established summer homes. Prominent families included the Allises, Bradleys, Falks, Fullers, Seamans, Spences, Strattons, Uihleins, and Wanvigs. Most built homes on parcels of land that were at least forty acres in size.[3]

The Milwaukee Country Club was the center of community life. It relocated to River Hills from Shorewood in 1911 as Shorewood was being redeveloped into a residential community. The members of the country club wanted to keep their community rural in character, though they did not see themselves as having much in common with the farmers who controlled the Town of Milwaukee government. The wealthy residents, therefore, incorporated as a village in 1930. The first village hall was established at the country club, and the club was known for its fox hunts and polo matches through the 1960s. Golf remains popular today.[4]

The village initially consisted of less than 2,700 acres of land, but more than eight hundred acres were annexed from the Town and City of Milwaukee between 1937 and 1974. Carefully written zoning laws required homes to be built on large lots. Eighty-five percent of River Hills’ residential lots are at least five acres of land, and the other fifteen percent own at least one acre. According to the U.S. Census Bureau, there were fewer than 1,600 residents in 2010, and the median household income was more than $156,000 in 2015.[5]

River Hills does not have any businesses—it is the one community in Milwaukee County that is nearly 100 percent residential. River Hills, however, could not zone out the U.S. Defense Department, which had a Nike missile silo in the 2000 block of W. Brown Deer Road from 1956 until 1971. Today, the community has several churches and synagogues, the small public Indian Hill elementary school, and the larger, private University School of Milwaukee. The University School was founded as the German-English Academy in 1851. It changed its name in 1917, during World War I, and merged with several other institutions over the years. It has been at its present location since 1961.[6]