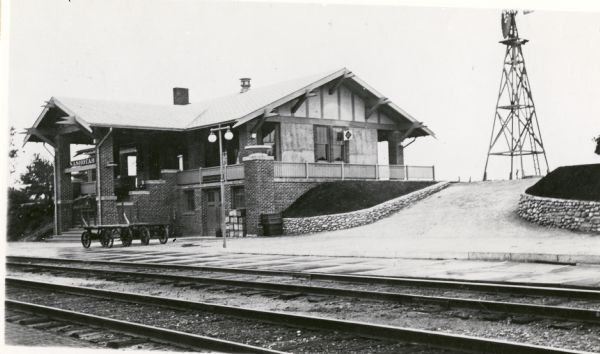 The Village of Nashotah is located about forty miles northwest of Milwaukee in Waukesha County’s Lake Country. The Village’s name comes from a Native American term meaning “twins.” Nashotah is named for the nearby Upper and Lower Nashotah Lakes, although the lakes themselves are not within the Village. The Village does border Lake Nagawicka and Forest Lake. In addition to the lakes, Nashotah is bordered by the City of Delafield, the Town of Merton, and the Village of Chenequa. Incorporated in 1957, Nashotah has traditionally served as a gateway to Lake Country and the Nashotah Mission.[1]

The Watertown Plank Road, which was completed in 1853, began Nashotah’s tenure as a crossroads.[2] In 1848, the Red Circle Inn, Wisconsin’s oldest restaurant, opened at the intersection of the plank road and a wagon road to Delafield.[3] By 1852, the Inn was a stagecoach stop on the plank road.[4] Nashotah became an important stop on the Milwaukee and Watertown Railroad (later part of the Chicago, Milwaukee, and St. Paul) when it first entered Lake Country.[5] The Nashotah station, originally called the Pine Lake station, opened in 1854.[6] Vacationers using the station to reach local lakes were joined by seminarians and theologians traveling to the Nashotah Mission.[7]

Although it had existed since the mid-nineteenth century, Nashotah was not incorporated until 1957. In the early years, Nashotah’s population remained small. The Village had just 321 residents in 1960 and fewer than 600 residents in 1990.[10] While much of Waukesha County experienced population booms during this period, Nashotah’s low population resulted in low property tax revenue and low involvement in Village affairs. By the 1980s, Nashotah, which had a tradition of volunteer public service, had difficulty finding residents to run for local government office.[11] Subdivisions in the 1990s, however, doubled the town’s population by the year 2000.[12] By 2010, Nashotah had reached 1,395 residents.[13] Because of this late expansion, over half of Nashotah’s residents live in homes built since 1990. The majority of village housing is single-family homes.[14]

Nashotah is home to the headquarters of Dickten Masch Plastics, though the majority of the village land is residential and agricultural. As of 2015, Nashotah had one farm still in operation.[15] The Village is served by the Arrowhead Union High School District’s Lake Country School, located in Hartland.[16] The private Lake Country Christian Academy operated in Nashotah for 37 years before closing in 2015.[17]

The History of Waukesha County, Wisconsin, Containing an Account of Its Settlement, Growth, Development And Resources; An Extensive And Minute Sketch of Its Cities, Towns and Village—Their Improvements, Industries, Manufactories, Churches, Schools and Societies; Its War Record, Biographical Sketches, Portraits of Prominent Men and Early Settlers; The Whole Preceded by a History Of Wisconsin, Statistics of the State, and an Abstract of Its Laws and Constitution and of the Constitution of the United States. Chicago, IL: Western Historical Company, 1880.