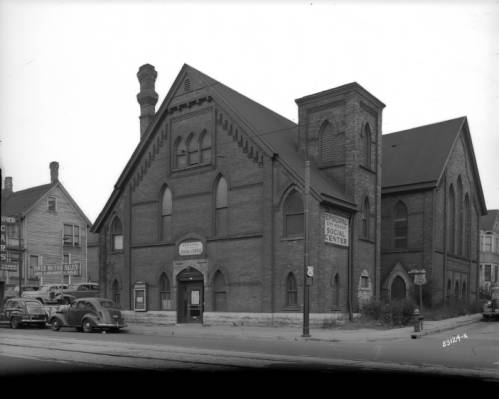 The Episcopal Church traces its establishment in Wisconsin to the early 1820s, when the Oneida Indians of New York were relocated to a reservation at Duck Creek, Wisconsin—very near Green Bay. Accompanying the Indians was Eleazer Williams, who in 1826 was ordained a deacon in the church and who ministered to the Duck Creek community. The church subsequently founded in 1829 a school for the Indians that was under the direction of the Reverend Fish Cadle, who also helped to establish Christ Church for white settlers in the Green Bay area.[1]

Cadle left the Green Bay station in 1837 and traveled to Prairie du Chien, where he formed a new congregation before departing in 1841. Cadle then assumed the leadership of an effort to start a mission near the fledgling village of Waukesha. Cadle had known for some years Jackson Kemper, the first Missionary Bishop of the Episcopal Church. For his part, Kemper had recruited three students from the church’s General Seminary in New York City for the purpose of establishing a Southeast Wisconsin mission. Cadle was to direct them, though he left less than a year later.[2]

The students recruited by Kemper were James Lloyd Breck, William Adams, and John Henry Hobart. These three spent the winter of 1841-1842 in Waukesha, after which, under Kemper’s direction, they sought a permanent location for their anticipated institution. William Adams, along with Lemuel Hull, then rector of St. Paul’s Episcopal Church in Milwaukee, found that spot on the eastern shore of Upper Nashotah Lake in northwestern Waukesha County. It was there that Nashotah House, a seminary, was established in 1842 for the purpose of training priests for service on the frontier of the Old Northwest.[3]

Jackson Kemper became the dominant nineteenth century figure in the Episcopal Church in Wisconsin and Milwaukee. He was born in New York State in 1789, graduated from Columbia University in 1809, ordained a priest in 1814, and spent the next twenty years of his priesthood at parishes in Philadelphia and Norwalk, Connecticut. From 1835 to 1859 following his consecration as a bishop, Kemper became responsible for the Episcopal Church in Indiana, Iowa, Minnesota, Missouri, and Wisconsin. He originally lived in St. Louis, but moved in 1844 to a property he bought about halfway between Delafield and Nashotah House. Kemper served as the first bishop of the Diocese of Wisconsin, predecessor to the Diocese of Milwaukee, from 1854 to his death in 1870.[4]

A key focus of Kemper’s service in Wisconsin and neighboring states was to help organize parishes that would serve the arriving settlers. The first parish in the City of Milwaukee was St. Paul’s, which was founded in 1838. Early services were held at the Milwaukee County Courthouse, located then on the block that today contains Cathedral Square Park. That is where the Good Friday service on April 10, 1838 was held. Later that year the Reverend Lemuel B. Hull became the rector of St. Paul’s. Hull was a dedicated churchman who not only served his own parish but helped to catechize the surrounding vicinity by offering services in Sussex and Oconomowoc (both in Waukesha County), as well as in the cities of Racine and Kenosha—all places to which he typically walked.[5] Today St. Paul’s is located at 914 E. Knapp Street. It is a fine monument to those who developed the parish over the years. It was designed by prominent Milwaukee architect Edward Townsend Mix in the Richardsonian Romanesque style and constructed between 1882 and 1890.[6]

As Milwaukee grew, two more Episcopalian parishes followed St. Paul’s. St. James was established in 1850 and served many of those considered to be among Milwaukee’s elites, including railroad magnate Alexander Mitchell (and father of General Billy Mitchell), who lived immediately across Wisconsin Avenue (then known as Grand Avenue) from the church.[7] The architect responsible for St. James Church, which was originally constructed in 1867-1868, was Detroit’s Gordon William Smith. It was rebuilt, again using Smith’s plans, after a fire in 1872 and has had subsequent additions.[8] The other parish was St. John’s, which was established in 1847 on Pierce Street in Walker’s Point. From the time of its founding, it was served for forty years by the Reverend David Keene, a Nashotah House graduate. That parish moved to a new building on 26th and Mineral in 1933.[9]

The cathedral of the Episcopal Diocese of Milwaukee is located at 828 E. Juneau Avenue, rather ironically only one block from St. Paul’s. The building was constructed in 1868 by the Olivet Congregational Church and was subsequently acquired in 1872 by the Episcopalians, who had already bought the west half of the block and were developing this property. Edward Townsend Mix, who was also involved with St. Paul’s, designed this structure. An adjoining house, conceived by Milwaukee architects Charles Kirchoff and Thomas Rose, was built for the bishop of the Diocese in 1902-1903. The church is significant for the Episcopal Church in the United States, as it is thought to be one of the first two cathedrals the church claims in this country.[10]

The number of Episcopalians in the diocese of and the city of Milwaukee has been falling in recent years. This fact notwithstanding, the church worked throughout the nineteenth century to establish a regional framework that is very much in evidence today. Nashotah House, St. Paul’s, the Cathedral, and St. James as well as the other parishes that evolved in Milwaukee and the surrounding area provide evidence that the church played a prominent role in settling and developing this area.

Writings about Episcopalians in Wisconsin