The United Performing Arts Fund (UPAF) is a collaborative, non-profit organization that has been central to the growth of Milwaukee’s performing arts community.[1] Its mission is to “promote the performing arts” and to provide “financial support of the performing arts in Southeastern Wisconsin.”[2] UPAF has raised more than $250 million since its inception in the late 1960s and has distributed the bulk of these funds directly to performing arts groups in Milwaukee.[3] This financial support is meant to keep UPAF member groups sustainable, reduce competition for funding, and make performances more affordable for audiences. UPAF’s contributions also allow member groups to engage and educate people of all ages through a variety of art education programs for children and enrichment programs for adults.[4]

Founded by a group of volunteers in 1967 under the leadership of attorney William Randall, UPAF’s original mission was closely tied to the construction downtown of the Milwaukee Performing Arts Center (known today as the Marcus Center for the Performing Arts).[5] Backed financially by the Milwaukee County government as well as private sources, this venue opened in 1969.[6] UPAF’s founding purpose was to provide financial stability for the various organizations that planned to use this multi-faceted site as their principal performance venue.[7] These groups included current UPAF members Bel Canto Chorus, Milwaukee Symphony Orchestra, Florentine Opera Company, Milwaukee Repertory Theater, and Skylight Music Theatre.[8] By joining forces through UPAF, founding member groups pooled their fundraising efforts and shared in a percentage of the annual proceeds raised. In exchange, each group agreed to support annual UPAF fundraising campaigns and generally forego individual fundraising drives.[9]

Both UPAF’s annual fundraising goals and the number of performing arts groups that benefit from its financial support have increased dramatically since the first campaigns of the late 1960s.[10] UPAF originally funded seven organizations, employed only volunteer staff, and operated out of William Randall’s law office.[11] By 2013, UPAF was powered by a paid staff of over twenty fundraisers and other professionals and provided financial support to thirty-eight diverse performing arts groups.[12] In addition to providing millions of dollars annually to its fifteen member groups, UPAF funds a variety of other arts groups through its affiliate program. Affiliates are chosen annually and awarded grants to fund specific projects.[13]

In order to reach its annual goals, UPAF regularly sponsors a variety of performances, activities, and fundraising events. These events often rely upon a mixture of individual, corporate, and governmental sponsorships. One of the most visible of these events is the annual UPAF Ride for the Arts, sponsored by Miller Lite. This annual recreational bicycle ride has been held every year since 1981; it was led from 1982 until 1990 by Milwaukee baseball and broadcasting legend Bob Uecker (and was known during that time as the Uecker Ride for the Arts).[14] In 2013, this event featured thousands of participants, hundreds of volunteers, and an assortment of routes from five to seventy-five miles long.[15] 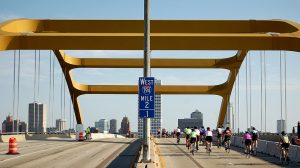