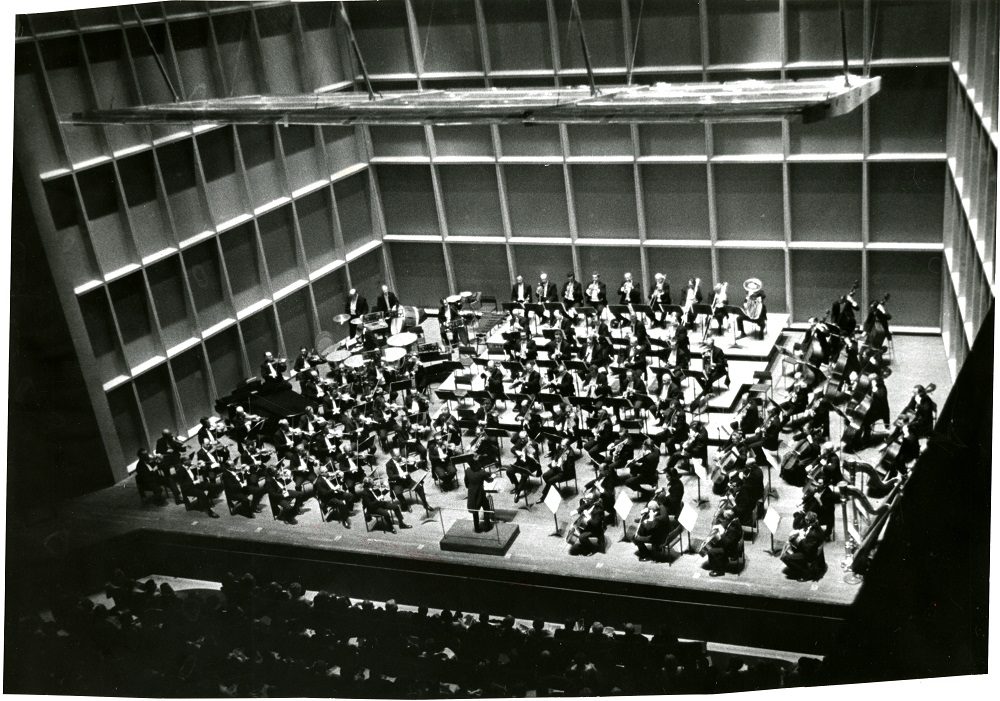 The Milwaukee Symphony Orchestra (MSO) was part of a post-World War II cultural renaissance in the city, when it earned national and international renown.[1] Numerous attempts to establish a professional local orchestra dated as far back as the 1890s. Individuals from throughout the Midwest formed “pops” style ensembles, but support for these organizations waned. With performing arts options limited, the Chicago Symphony Orchestra established a strong presence in Milwaukee.[2] Following the First World War, anti-German sentiment took a serious toll on Milwaukee’s cultural organizations. The Depression foiled Frank Laird Waller’s attempts to establish the Milwaukee Philharmonic Orchestra in 1929. In 1933, the WPA briefly sponsored an orchestra under the direction of Sigfrid Prager, but financial support was withdrawn as the United States neared war. Polish musician Jerzy Bojanowski established a chamber orchestra in 1935, but after the initial buzz wore off, he joined the “Music under the Stars” program.[3]

Finally, in 1953, John-David Anello, Sr. established the Milwaukee Pops orchestra. Evolving out of a series of free summer concerts that were held in Humboldt and Washington Parks, Anello’s “pops” ensemble performed throughout the 1950s and enjoyed moderate success.[4] In May 1959, it officially changed its name to the Milwaukee Symphony Orchestra. Harry John Brown was appointed permanent conductor in 1960.[5] Under Brown, the orchestra grew in size and reputation and performed in several other Wisconsin cities during the 1962-63 season.[6] By 1966, Milwaukee became the youngest orchestra ever to achieve official recognition as one of the nation’s major symphonies.[7] When Brown stepped down in 1968, he was replaced by Kenneth Schemmerhorn.

Foss and Zdenek Macal, who succeeded Foss in 1986, presided over a difficult financial period in MSO’s history. Throughout the 1980s and early 1990s, the young group grappled with the fact that it had no major endowments to rely upon for support. Many of the country’s top orchestras predated the Milwaukee Symphony by thirty years. Their age allowed them the opportunity to build a network of wealthy supporters, who often left them endowments following their deaths. Milwaukee’s funding, however, came primarily from the United Performing Arts Fund. With so many arts groups in need of UPAF funding, the MSO experienced its share of financial uncertainty. Another consequence of the MSO’s rise in status was that it lacked the capacity to build up a strong audience to support it. In a city struggling with Rustbelt decline, questions were raised about whether cultural life would suffer along with industry.[10] In spite of financial problems, Macal did broaden MSO’s international reputation by leading them on a tour of Japan in 1992.[11]

Under Andreas Delfs, who took the helm in 1997, MSO launched an educational outreach program known as Arts in Community Education. Its effort to integrate music and art into Milwaukee area schools was a model for other major orchestras across the country.[12] Delfs also enhanced MSO’s international reputation through touring and technology. In 1999, MSO became the first major U.S. orchestra to perform in Cuba since the beginning of the trade embargo.[13] The visit was quite controversial, as it coincided with the international debate over the return of six-year old Cuban refugee Elian Gonzalez to his father in Cuba. Although some groups strongly criticized the trip, the orchestra’s visit was praised by others as a step toward thawing the lingering Cold War tensions between the United States and Cuba.[14]

The MSO also made waves closer to home with its technological innovation. Throughout its short history, the symphony has been a leader in musical technology. They began recording for radio broadcasts in 1976. Over the next thirty years, they built an archive of over 400 recordings. In 2005 they capitalized on this collection by becoming the first major symphony orchestra to make recordings available for download on iTunes. The first fourteen performances were listed on October 4, 2005.[15] When Delfs stepped down following the MSO’s 50th anniversary, he was replaced by Edo de Waart, who has continued to build on the organization’s stellar international record.[16]