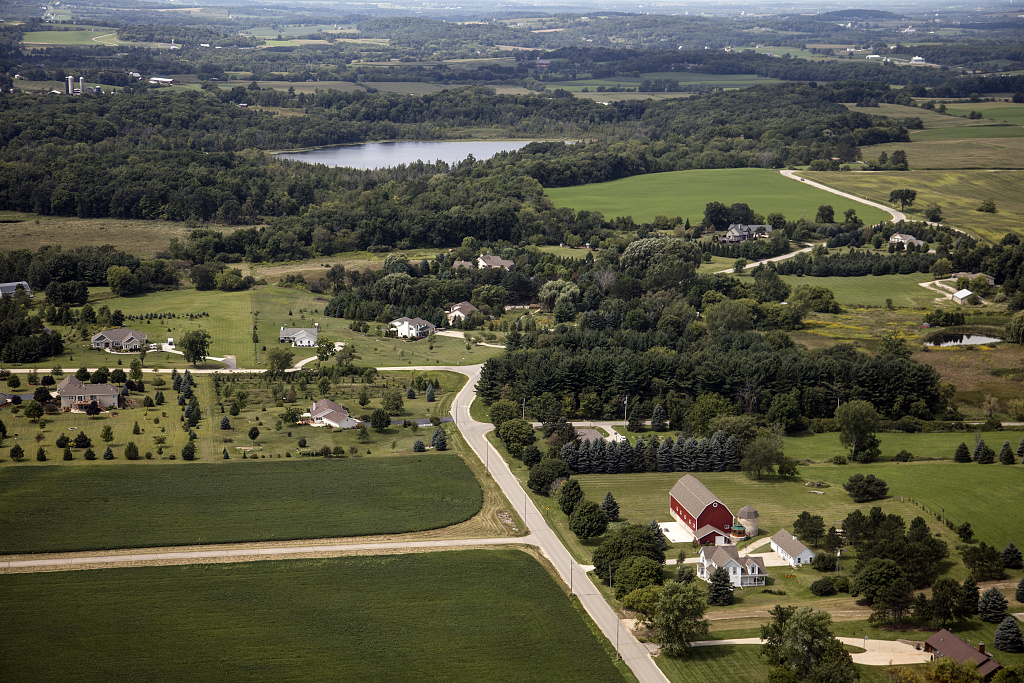 Incorporated on January 16, 1846, the Town of Erin is located in the southwest corner of Washington County. The Town features one of the highest points in southeastern Wisconsin, an elevation of 1,330 feet above sea level. Perched atop this hill, overlooking hundreds of acres of natural hardwood forest is Holy Hill, a minor basilica of the Roman Catholic Church.[1]

Catholicism has been central in the Town of Erin since the early days of white settlement. The first wave of European immigrants consisted predominantly of Irish Catholics, who arrived in the 1850s. By the 1870s, the Irish settlers were joined by German and Norwegian immigrants. Still, by 1940, nearly ninety percent of the Town’s population claimed Irish descent.[2]

Agriculture was their main occupation. A list of local enterprises from 1892 indicates that the majority of businesses in the Town were farms, though the Town also featured a blacksmith, a hotel, and a general store. While creating the signature rolling hills of the region, the receding glaciers deposited stony sediments that often made cultivating the fields difficult. Local accounts by Irish immigrants lament the presence of these “stone potatoes.” Processing dairy products became a way to supplement income from crop farming; between 1893 and 1943, the Town of Erin was home to no less than seven creameries.[3] Production of cheese and butter was centralized, with surrounding farmers belonging to or being stockholders of a particular creamery.[4]

The population of the Town of Erin remained relatively stable for nearly a century after 1860, hovering around one thousand residents. After 1950, its population surged, almost quadrupling from 995 residents in 1950 to 3,747 in 2010.[5] As early as 1969, residents of the Town of Erin expressed displeasure at this population increase. They claimed that the influx of subdivisions and the building of new homes was breaking up historic farmland and marring the rural landscape.[6] Still, into the early twenty-first century, the majority of land in the Town of Erin remains predominantly agricultural, followed by wetlands and woodlands. Residential properties are dedicated almost exclusively to single-family homes.[7] According to 2000 Census data, residents of the Town of Erin had the second-highest median household income ($74,875) compared to residents of other Washington County municipalities.[8]

The Town hosts just more than 1,400 acres of public and private park space, including the 652-acre Erin Hills Golf Course.[9] A public golf course opened in 2006, Erin Hills attracted the United States Golf Association’s 2017 U.S. Open Championship.[10] A popular local event is the St. Patrick’s Day Parade, an annual celebration that began in 1979. By the early 2000s, the parade attracted in excess of 20,000 spectators each year.[11] Residents of the Town of Erin have enjoyed organized recreation in the form of baseball since the mid-twentieth century. From the 1930s through the 1950s, amateur adult leagues from Erin and neighboring Monches (in Merton) entertained local spectators on Sunday afternoons.[12]