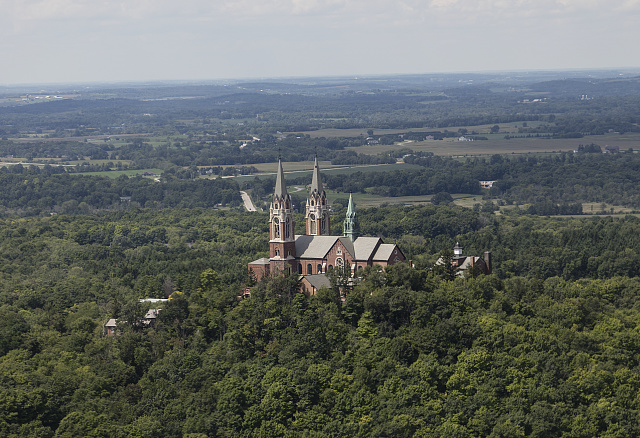 The Basilica of the National Shrine of Mary, Help of Christians at Holy Hill, more commonly referred to as Holy Hill,[1] is a minor basilica of the Roman Catholic Church and is located in southwestern Washington County. Holy Hill is perched in the Kettle Moraine at one of the highest points in southeastern Wisconsin, an elevation of 1,330 feet above sea level and is surrounded by hundreds of acres of natural forest.[2]

Originating as a pilgrimage site for Marian devotions, Holy Hill continues as a place of devotion and worship. Since 1906, Discalced Carmelites, members of a Roman Catholic religious order, have overseen the site.[3] However, a religious presence was established at the site beginning in the mid-1800s. Local legend offers accounts of Francois Soubrio, the so-called “Hermit of Holy Hill.” Soubrio is said to have been inspired to find the place after reading the journal of Father Jacques Marquette. After identifying the location and experiencing a religious healing at its peak, Soubrio built a small chapel. He proceeded to inhabit the hill during the 1860s.[4]

A series of religious and residential structures were built through the early twentieth century. Ecclesiastical projects at the site culminated with the construction of the current church structure, which was completed in 1931.[5] The architectural style of the church is Romanesque Revival.[6]

From its early days, Holy Hill has attracted a multitude of visitors, both pilgrims and sightseers alike. In the present day, the site hosts more than 500,000 visitors annually.[7] Holy Hill was listed on both the National and State (Wisconsin) Registers of Historic Places in 1992.[8]