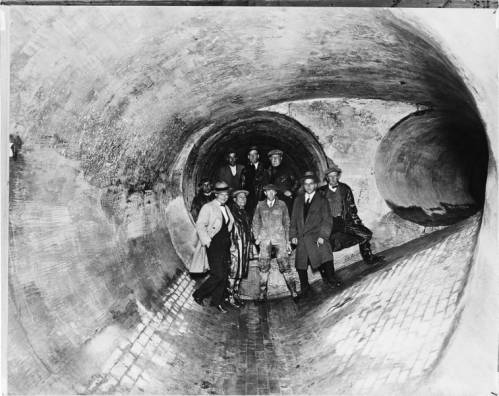 Sewage is a variable liquid comprising material from a variety of sources, including, but not limited to: human waste; industrial waste; runoff from household and manufacturing processes; animal waste and road runoff; and rainwater. Sewage that requires processing through chemical and biological means to eliminate toxins and germs is considered “sanitary sewage”; that consisting of rainwater and storm debris is designated as “storm sewage.” Before Robert Koch’s discovery of germ theory in 1884, the disposal of sewage was considered more of an aesthetic and transportation issue than one of public health and hygiene; the miasmatic theory of disease popular until the end of the nineteenth century determined that sewers were necessary to dispose of foul odors that caused sickness rather than to eliminate sources of bacteriologic infection.

Sewerage in Milwaukee began before the provision of a water supply. In 1869, Milwaukeeans became concerned over inadequate drainage of the downtown area due to its low-lying characteristics and former swampland status. The Common Council authorized the construction of storm and sanitary sewers to remove surface runoff, industrial waste, and the contents of overflowing cesspools and privy pits. The sewage was deposited into either the Milwaukee or the Menomonee Rivers, depending on which was nearer. This sewage consisted largely of runoff from slaughterhouses and tanneries and was extremely offensive. The tradition of sewage disposal was “the solution to pollution is dilution”; low water levels prevented this from occurring.

The arrival of a water supply system in 1875 rather quickly overwhelmed the existing sewers. The additional water available to households and businesses overflowed the available privy pits and cesspools. It delivered so much outflow to the two rivers that their ability to dilute the waste and carry it into Lake Michigan was impeded. The problem was acute in the summer months when both rivers became intermittent at best. Complaints about the smell and general appearance of the Milwaukee River in particular were so great that occupants evacuated buildings near the riverbanks. A public commission recommended the construction of a series of intercepting sewers that would parallel the rivers, delivering the waste into Lake Michigan at a point one mile south of the harbor entrance (the site of the present sewage treatment plant). It also recommended the installation of pumps at the head of the sewers to ensure that flow would continue even when the level of water in the rivers was too low for gravity to move it. This flushing station was on the Milwaukee River, near what is now Riverside University High School. By 1893, the city had constructed over 225 miles of these sewers, at a cost of approximately $3 million. Yet if rainfall of over ¼ inch in a twenty-four-hour period occurred, the system overflowed. This problem required the construction of a second flushing station in the Kinnickinnic River in 1907.

The flushing pumps and tunnels eliminated blockages during periods of scarce rainfall, and odors decreased. But they also delivered pathogens into the main intake area for the water supply. Typhoid fever broke out repeatedly between 1909 and 1926.[1] The Common Council authorized a study of the issue and determined that either a water treatment or sewage treatment plant be constructed to deal with the problem; however, they recommended both be used in conjunction to permanently solve the problem of pollution. In 1910, the State Hygiene Laboratory determined that the contamination extended seven miles into Lake Michigan.[2] In 1912, the city Health Department concluded that water available in city hall was unfit for consumption 40% of the time. The department recommended that a sewage treatment plant be built; the following year the Common Council authorized the formation of a Sewerage Commission to study the problem, devise a solution, and implement it.[3]

Beginning in 1913, the introduction of hypochlorite of lime to the water supply reduced the incidence of the disease. Sometimes the dispenser froze or the amounts of sewage discharged overwhelmed the capacity of the chemical to neutralize the contamination. Conditions were so severe from 1916 to 1918 that the city’s Health Commissioner, Gerhard Bading, described the water supply as a “typhoid highball.” The city needed an alternative system to eliminate pathogens.[4]

By 1920, it became evident that funds for the construction of either a water or sewage treatment plant would not be available from the city. Municipalities within Milwaukee County but outside of the city water supply area created their own sewerage commission. This Metropolitan Commission, acting in conjunction with the Milwaukee Sewer Commission, recommended and undertook the connection of the county-wide intercepting sewers to those of the city. It also petitioned the state for the right to fund the construction of a district wide sewage treatment plant.[5] With this funding, the city dropped its idea for a water treatment plant in 1922. The Jones Island Treatment Plant, a state of the art facility, went into operation in 1925. The Jones Island plant used an activated sludge treatment process, allowing for the production of Milorganite brand fertilizer, sales of which helped to fund the plant’s operations. By 1930, the Jones Island facility was processing 200 tons of sewage per day.

However, problems did not entirely disappear. Shifting winds blew sewage output into the water supply intake on a number of occasions, resulting in a recurrence of typhoid. Construction of a water treatment facility was finally begun in 1934; it went online in 1939.[6] While water supply was assured, pathogens and odors from the sewage outlet frequently overloaded the capacity of the Jones Island facility, especially after WWII. The plant was expanded in 1952. The South Shore Sewage Treatment plant in Oak Creek was opened in 1968 as a relief and supplementary facility.[7] Jones Island was expanded again in 1968 and 1974.

In order to comply with the federal Clean Water Act of 1972, the Milwaukee Metropolitan Sewerage District (MMSD) began to draft proposals to update the processing of sewage at both plants. This legislation set limits as to the amount of effluent each state could discharge into waterways. Milwaukee did not yet disinfect effluent after treating sewage, which meant that when heavy amounts of storm water exceeded the capacity of the system to process it, the District forced raw sewage into Lake Michigan. The Wisconsin Department of Natural Resources (DNR) ordered Milwaukee to reduce its overflows to meet the federal standards.[8] In May of the same year, Illinois and Michigan filed suit against Milwaukee, Racine, South Milwaukee, and Kenosha because of this discharge. The other three cities settled out of court; when the case came to trial in 1977, the court ordered Milwaukee to end its overflows.[9] The DNR and MMSD entered negotiations to find a solution; continuing court appeals and reversals delayed a final proposal until 1981, when the United States Supreme Court ruled in favor of the MMSD proposal.[10]

The decades-long expansion of the area covered by MMSD vastly increased the amount of both storm and sanitary sewage to be processed. The final incorporation of all land within Milwaukee County in 1957 into the District,[11] combined with urban sprawl, more than quadrupled the amount of influent to both plants. The need for more capacity, combined with the court settlement, resulted in the District’s reorganization. The District expanded the treatment capacity of both plants, built a deep tunnel holding system to store rainwater until it could be treated, and created an abatement district that served an expanded area. Previously, many suburban districts employed septic tanks as a method of disposal; the geometric increase in development in these formerly rural areas made this method both impractical and illegal, as it caused excessive rates of pollution in inland waterways.

The creation of the Deep Tunnel system enabled the district to hold approximately 500 million gallons of wastewater in more than 24 miles of tunnels until treatment capacity is available. Phase One of the Deep Tunnel System was completed in 1994, and Phase Two in 2007. Despite the tunnels, increasing numbers of high volume rainstorms in the years since the system was designed have resulted in an almost annual pattern of overflow discharges of untreated water into Lake Michigan.[12] The actual amount of raw sewage contained within the overflow is unknown and is likely to be extremely small, due to the volume of storm sewage contained in the overflow (WISDNR estimates the percentage of sanitary sewage in the total volume to be 5%).[13] Nonetheless, the fact that overflows continue after the full implementation of the Deep Tunnel system has resulted in continued litigation and negotiation between the State of Wisconsin, other states bordering on the Great Lakes, and the federal Environmental Protection Agency.[14]

To address these issues, MMSD’s current policy is to urge local municipalities to separate storm and sanitary sewers by having property owners disconnect downspouts from sanitary sewer connections. This has proceeded in areas of the City of Milwaukee and in many of the suburban districts that constitute the district, beginning with neighborhoods located in areas most affected by flooding in periods of high rainfall. This practice should result in the ability of MMSD to discharge storm runoff uncontaminated by sanitary components into Lake Michigan. Additionally, the District has implemented ten additional programs to reduce storm water infiltration, including rain gardens, bio-swales, artificial wetlands, green roofs and alleys, and porous pavement.[15]