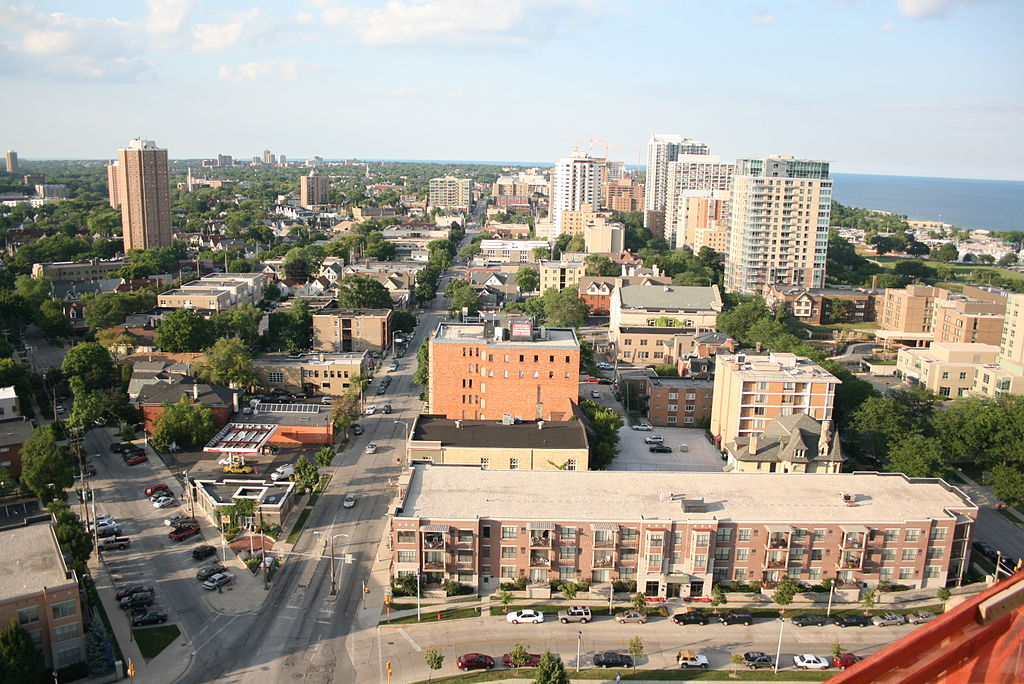 Milwaukee’s East Side is the area roughly bounded by Lake Michigan to the east, the Milwaukee River to the west, the Village of Shorewood (E. Edgewood Avenue) to the north, and E. Ogden Avenue to the south.

Covering a small northeast corner of the city representing only about 4%[1] of Milwaukee’s total area, the East Side is home to a large number of Milwaukee’s well-preserved historic buildings, popular attractions, iconic structures, and defining places.

Concerted settlement in the East Side neighborhood began during the 1880s.[3] Yankee-Yorkers predominated toward Lake Michigan, as they moved north from older neighborhoods closer to downtown. The area had a distinctly middle class feel compared to the rest of the city.[4] Housing development occurred largely over the next few decades. Many historic homes are still preserved, resulting in eight separate residential districts today being listed on the National Register of Historic Places. Also listed on the register and/or designated locally as historic are Lake Park, two commercial districts, many individual buildings, and part of UWM’s campus.

The East Side is far from homogeneous. Ten separate residential neighborhood groups make up the East Side’s four square miles. Two of the more quintessential “East Side” areas are the historic North Point (including Lake Park and adjoining neighborhoods) and Brady Street neighborhoods.

Brady Street’s commercial and residential development began in the 1870s. Polish immigrants settled on swampy land near the east bank of the Milwaukee River north of E. Brady Street in order to be close to tannery and factory jobs. Commercial buildings clustered along Brady Street.

Many modest homes of a number of styles, mixed in with occasional grander houses, surrounded the commercial district to the north, creating a Polish urban village. By the 1920s, Italian merchants began to establish businesses on Brady Street, and a new Italian residential neighborhood grew south of Brady Street.

Eventually, the Italian influence overtook the area, but in the 1960s and 1970s, the neighborhood became Milwaukee’s counterculture and hippy epicenter. After blight began to set in during the early 1980s, a Business Improvement District was formed and the commercial area and some homes received city historic preservation protections. The business area has since seen revitalization and has become more diverse. In addition to a traditional Italian bakery and grocery, a variety of ethnic restaurants and local taverns dot this popular commercial street along with a mix of traditional and eclectic businesses, many in restored historic buildings.

Elsewhere on the East Side, commercial districts are also located on E. North and N. Downer Avenues, each with their own mixes of historic buildings and attractions.