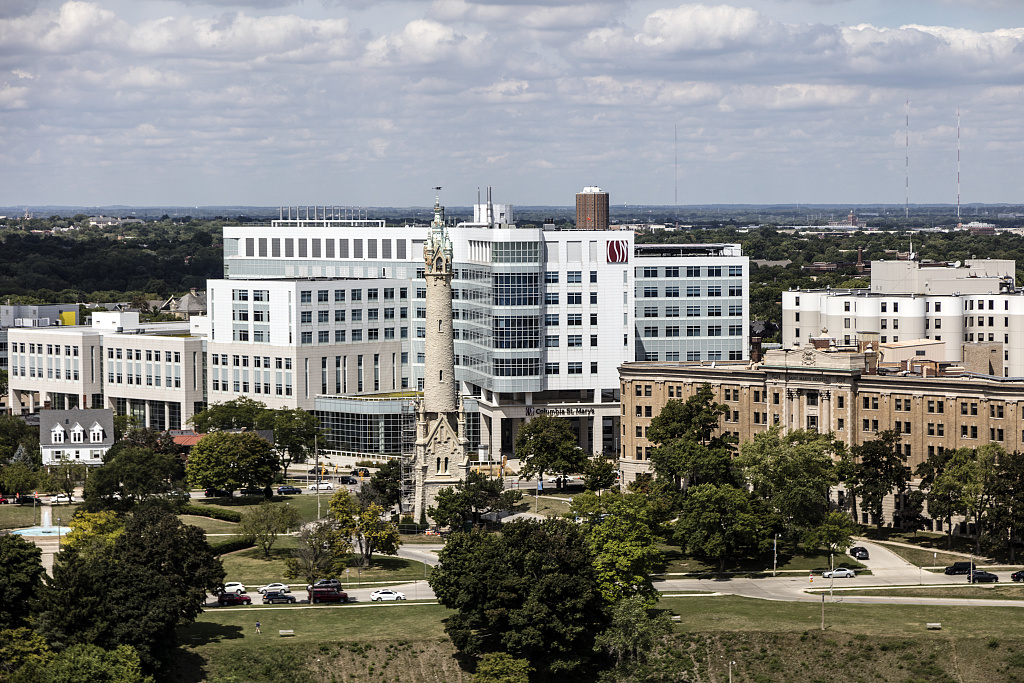 Columbia St. Mary’s is really the history of two institutions: the Catholic St. Mary’s, Wisconsin’s first hospital, and Columbia, a non-sectarian hospital focused on research and teaching. Their developments reflected the maturation of the health care industry, including the search for cost savings in the 1980s and 90s that brought them together under one roof on the East Side.[1]

St. Mary’s, the older of the two, traces its existence to the corner of Jackson and East Wells Streets.[2] Seeking to aid the frontier city’s growing number of sick and poor, Bishop John Henni had requested the assistance of the Sisters of Charity, an order of Catholic women located in Maryland.[3] Skilled in schooling and nursing, the first group of Sisters arrived in 1846 while Solomon Juneau oversaw the donations that eventually transformed a two-story building into St. John’s Infirmary in 1848.[4] Wisconsin’s first hospital began caring for Milwaukee’s sick regardless of religion or nationality and without recompense—a radical idea at the time.[5]

In 1858, the Daughters of Charity, as the Sisters were now called, moved into St. Mary’s Hospital, a new facility at Northpoint.[6] The hospital’s patient load grew, prompting a new wing in 1889, and by 1900, a majority of patients checked in for surgery rather than care—a sign of the more advanced state of invasive procedures that also begot the initiation of a formal medical staff in 1899.[7]

At the beginning of the twentieth century, St. Mary’s began receiving state subsidies and raised enough private funds to open a new building in 1910.[8] As the technological advances and specialization of the following decades modernized and expanded the facilities, the Daughters continued their work, nursing servicemen through two wars and influenza patients during the epidemic of 1918.[9] Sisters also worked as instructors in the hospital’s nursing school and helped treat patients in St. Mary’s renowned burn treatment center, one of the nation’s first.[10] In the later decades of the century, economic challenges forced the hospital to begin consolidating with area institutions.[11]

Like its partner, Columbia Hospital originated in 1909 in a small downtown building, in this case, the private Knowlton Hospital on Michigan Street.[12] The brainchild of prominent Milwaukee business leaders who envisioned a non-religious, research-oriented hospital for Milwaukee in the mold of the Mayo Clinic and Johns Hopkins, Columbia was created to provide teaching clinics, a pathological laboratory, and postgraduate training.[13] Ten years later, a modern facility on Hartford Avenue opened. It featured a complete medical laboratory—Milwaukee’s first—where Columbia researchers in the 1920s devised a method to preserve and store blood for emergency cases.[14] Such work laid the foundation for the Milwaukee Blood Center. In the 1950s, Columbia doctors performed Milwaukee’s first cardiac surgery and researchers developed an artificial kidney.[15] By the 1990s, Columbia had expanded into a number of health care services and into other communities, including Ozaukee County in 1994.[16] Efforts to control costs led to a ten-year membership within the Horizon Healthcare network, which also included St. Mary’s. When that association disbanded, Columbia merged with St. Mary’s and constructed a new $417 million-dollar facility on Lake Shore Drive that opened in 2010.[17] At the same time, the Columbia Hospital on Hartford Avenue closed and was purchased by the University of Wisconsin-Milwaukee.[18] In 1999, Columbia-St. Mary’s merged with Ascension, which claims to be the largest non-profit, Catholic health care network in the United States, and in 2016 it was announced that all of Columbia St. Mary’s hospitals and clinics would be included under the Ascension Columbia St. Mary’s name.[19]