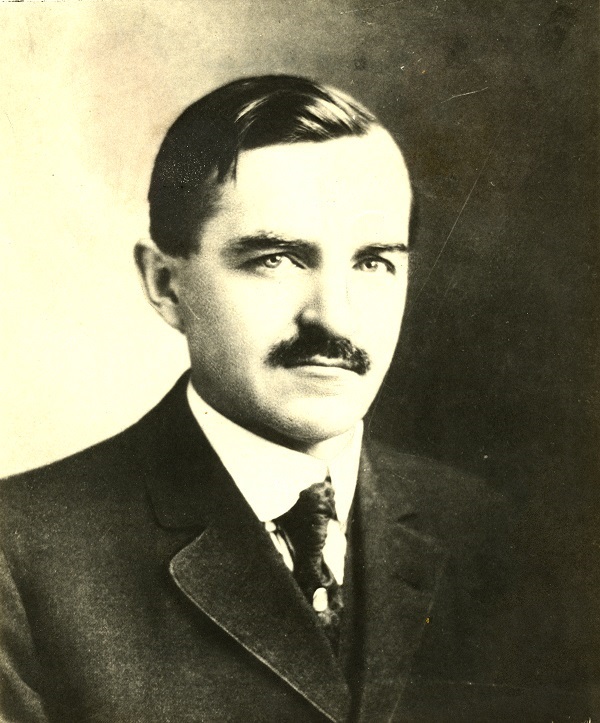 As mayor from 1916 to 1940, Daniel Webster Hoan transformed Milwaukee from a graft-ridden, ineffective municipality to a well-governed city that received national recognition for its high-quality services. Winning ten consecutive citywide elections as a Socialist, Hoan joined the Democrats during World War II and helped reshape the modern state party.

Born in Waukesha in 1881, Hoan quit school on his father’s death in 1894 and deferred his education until 1901 when he entered the University of Wisconsin. Following graduation in 1905, Hoan moved to Chicago, opened an unsuccessful restaurant, studied law, and was admitted to the bar. In 1908, he moved to Milwaukee, where he practiced labor law.[1]

Elected city attorney on the Socialist ticket in 1910, Hoan’s work seeking lower fares and better service from the Milwaukee Electric Railway and Light Company won him popular support and reelection in 1914.[2] Two years later, Hoan accepted the Socialist nomination for mayor and won the first of seven elections to that post. During his twenty-four years in office, Hoan rarely had a Socialist majority on the Common Council, but through his personal popularity, veto pen, and ad hoc alliances with nonpartisan aldermen, Hoan accomplished dramatic changes for the city.

A man with few pretenses, Hoan genuinely enjoyed people. In person, Hoan had a “warmth and friendliness that can be intoxicating.”[3] With large groups, Hoan “talks his audiences’ language, knows how to make them laugh and cheer, keeps them fascinated by the way he thumps a table, shakes his finger, wrinkles his face, hunches his shoulders, strides up & down, leaps in the air.”[4] Still others called him “cantankerous but charismatic.”[5]

Hoan’s first two terms (1916-1920) were marked by divisions stemming from World War I. The national Socialist Party adopted a platform in April 1917 that called for opposition to the war, but Hoan tried to walk a middle ground between his Socialist comrades and supporters of the war. He carried out draft registration in Milwaukee and served as co-chair of the local Council of Defense. To ensure adequate food was available at reasonable prices, starting in 1917 Hoan arranged for the purchase of carloads of food that was sold at temporary markets.[6] As late as 1920, surplus Army goods were sold through city offices. Hoan boasted: “the public sale of food by me has offered an opportunity of demonstrating the Socialist theory of operating a business.”[7]

In 1920, mayoral terms in Milwaukee were lengthened from two to four years; Hoan subsequently won another five terms. Under his leadership, the city gained a reputation for honesty, efficiency, and public safety. The city won national awards for health, safety, and policing.[8] Time magazine featured Hoan on its cover in 1936 and claimed that “under Mayor Hoan, Milwaukee has grown famed as a paragon of cities.”[9] The U.S. Conference of Mayors elected Hoan as its president in 1934.

Hoan achieved his major successes in planning, fire and police protection, public health, and recreation. In 1920, Milwaukee became only the twelfth city in the nation to adopt comprehensive zoning. Hoan reformed the city police and fire departments by establishing a merit system, increasing pay, and funding officer training. The city promoted public health through stepped-up health inspections and a public vaccination program, and juvenile delinquency was fought through city-sponsored recreation programs.[10]

Hoan had less success in promoting Socialist calls for cooperatives and public ownership. His efforts to expand city ownership of the electric utilities and the street railways met with defeat. He had more success in establishing Garden Homes project on Milwaukee’s north side, an experiment in cooperative housing, as well as several municipally-owned operations.[11]

Hoan believed in an activist government that not only fixed problems after they occurred but prevented them by addressing their root causes. In his 1936 book City Government, Hoan argued “that civilization should be judged by the amount of service that the people in a community demand and can afford to pay for, and not by how low a tax rate they may have.”[12]

Hoan inherited a city government that relied on borrowing to run operations. The mayor set the city on a more stable course by creating an amortization fund that would leave the city debt-free. Due to the city’s financial soundness, in the early years of the Great Depression, Milwaukee was able to pay its bills while other cities defaulted. As the Depression dragged on, Milwaukee was in danger of being unable to meet its payroll in January 1933 and the city issued “baby bonds” in small denominations redeemable in four years with interest. The bonds retained their value and the city avoided default.[13]

The successes of the New Deal began to undercut labor support for Milwaukee’s Socialist Party, and Hoan recognized the need for a new third party. He helped build a state Farmer Labor Progressive Federation and ran and won reelection as mayor as its endorsed candidate in 1936; however, most of the other candidates on his ticket lost, forcing Hoan to face a veto-proof City Council.

Political newcomer Carl Zeidler defeated Hoan in an upset in 1940. The next year Hoan resigned from the Socialist Party. After briefly aligning himself with the Progressive Party, Hoan joined the Democrats and worked with other Wisconsin liberals seeking to wrest control of the state party from conservatives. In 1944 and 1946, Hoan won the Democratic nomination for governor. Although he lost both races, in both instances he more than doubled the Democratic vote for governor from 1940 and 1942.[14] Between 1948 and 1952, Hoan ran unsuccessful races for Milwaukee mayor, Congress, and the state legislature, before finally retiring from electoral politics. In his retirement years, Hoan remained interested in the Milwaukee Harbor Commission and celebrated the establishment of the St. Lawrence Seaway, a cause that he had long promoted. Hoan suffered a series of strokes starting in 1960 and died on June 11, 1961 at the age of 80.[15] In his campaigns, Hoan called for “a better, bigger and brighter city.”[16] Milwaukee’s successes were his legacy.