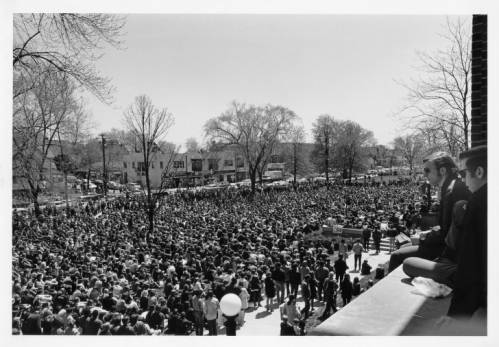 Peace. A word considered by both religious and secular society as an ideal condition for human well-being. Too often, the concept of peace itself is linked to war or stopping war, with less focus on how societies achieve well-being.

Anti-war groups, which work against war, violence, and injustice, have shaped a significant part of Milwaukee‘s history. During the Civil War, the local militia urged people to “prepare for war and prepare for peace.”[2] Instead, men resisted service during the Civil War and every subsequent war, right up until 1973 when the draft ended. Volunteers have counseled those considering alternatives to military service and have aided those applying for conscientious objector status.

Resistance occurred in other ways, too. Socialists used slogans, referring to the Great War as a “Big Businessmen’s War”; pamphlets, asking “What are We Fighting For?”; and questions asking why and when wars actually start,[4] questions asked about every subsequent war, including the current “war on terrorism.” The Women’s International League for Peace and Freedom (WILPF) worked to stop US involvement in the Great War; successfully advocated the Wisconsin legislature to support the outlawing of war in the 1920s; urged an end to the draft; and advocated for nuclear disarmament. Wisconsinites resisted participation in air raid drills during World War Two; ignored civil defense drills during the Cold War; protested military oppression in Central America; and protested various weapons systems, most recently, drones.

The Milwaukee Fourteen brought the Vietnam War home in dramatic fashion in 1968 when they entered Milwaukee’s Selective Service offices, removed 10,000 draft cards, and burned them as a statement of resistance to the Vietnam War.[5] The Milwaukee Peace Action Center also organized resistance to the Vietnam War. A number of people who protested wars in the 1970s and 1980s did so as members of local chapters of groups that centered “war” in their name and/or in their protests against war, including Clergy and Laity Concerned, Mobilization for Survival, Beyond War, and Physicians for the Prevention of Nuclear War. Peace Action-Milwaukee has taken the lead in protesting wars in the twenty-first century.[6]

People also recognized the links among jobs, injustice, and peace. The “Bay View Massacre” occurred when the state militia fired upon workers protesting unjust working conditions in 1886, killing seven workers. Socialists have protested a war-fueled economy during every war, often joined by peace activists.[7] Peace activists have also supported protests against various forms of injustice, such as racism, apartheid, homelessness, and community violence.

Milwaukeeans also actively worked for peace during these centuries, work that always begins with an ability to imagine and then act to generate new possibilities.

One war that affected people in what later became Milwaukee is known as the Bridge War of 1845. The war ended when people on both sides imagined new possibilities and considered what they might accomplish by cooperating to achieve a common goal. Milwaukee was established in 1846 because people put aside their differences and worked “together for the good of the city.”[8]

Following centuries of wars, government leaders and citizens who began to imagine a world at peace gathered for the World Congress for Peace in the Hague, Netherlands in 1899 to identify criteria indispensable for a lasting peace.[9] Wisconsinites embraced this new concept and later incorporated it into the “Wisconsin Plan for Peace” during the Great War. This proposal served as a model for Wisconsin and all nations seeking a sustained peace.[10] Socialists, too, urged that the “peaceful settlement of disputes by conference, conciliation, arbitration, and judicial determination be strengthened.”[11]

Local organizations also provided information about peace and justice. WILPF, the World Federalists Association, the UN-USA, and the Institute of World Affairs at UWM’s Center for International Education all sponsored public lectures.[12] The Fellowship of Reconciliation, Church Women United, the Interfaith Conference of Greater Milwaukee, and local congregations did likewise from faith perspectives while fostering interfaith relationships related to peace and justice.[13] Peace groups also advocated for practices, policies, and systems necessary for protecting families and their communities. Socialists and Jobs with Peace worked for a peace-centered economy.[14] The Milwaukee Alternative Life Fund used resisted federal taxes to support schools, playgrounds, and food cooperatives.[15]

Currently, artists, actors, and musicians invite people to imagine and to create a more just and peaceful world through performances. WILPF, Peacemaking Associates, Serve2Unite, and Summer of Peace 365 promote peace programs for children. Peace Gardens foster healthy eating and healthy neighborhoods. Franciscan Peacemakers and WILPF aid victims of the sex trade. Jewish Voices for Peace seeks peace between Palestinians and Israelis. Milwaukeans also celebrate their efforts for peace with justice with gatherings such as Lanterns for Peace and the ChardhiKala Run to honor victims of the Sikh Temple shooting.

Milwaukee area congressional leaders, peace groups, and citizens have long supported national efforts for peace with justice, including Peace through Law, the United States Institute of Peace, the International Court for Justice, and a cabinet level Department of Peace because it “is fitting that a nation, which places a primacy on peace, establishes within the highest councils of its government, a department and a section whose sole function is the pursuit of peace.”[17]

Intersectionality refers to the growing awareness of the interconnectedness among issues that affect people whose very lives embody the concept of intersectionality: in terms of race, gender, sexual orientation, generation, ability, disability, and religion, among others. Intersectionality poses challenges for people regarding both personal identity and personal responses to this complexity of issues. Peace workers are beginning to recognize this intersectionality in their on-going work to create a just and peaceful world for all people.[18]

Shifferd, Kent D. From War to Peace: A Guide to the Next Hundred Years. New York, NY: McFarland, 2011.