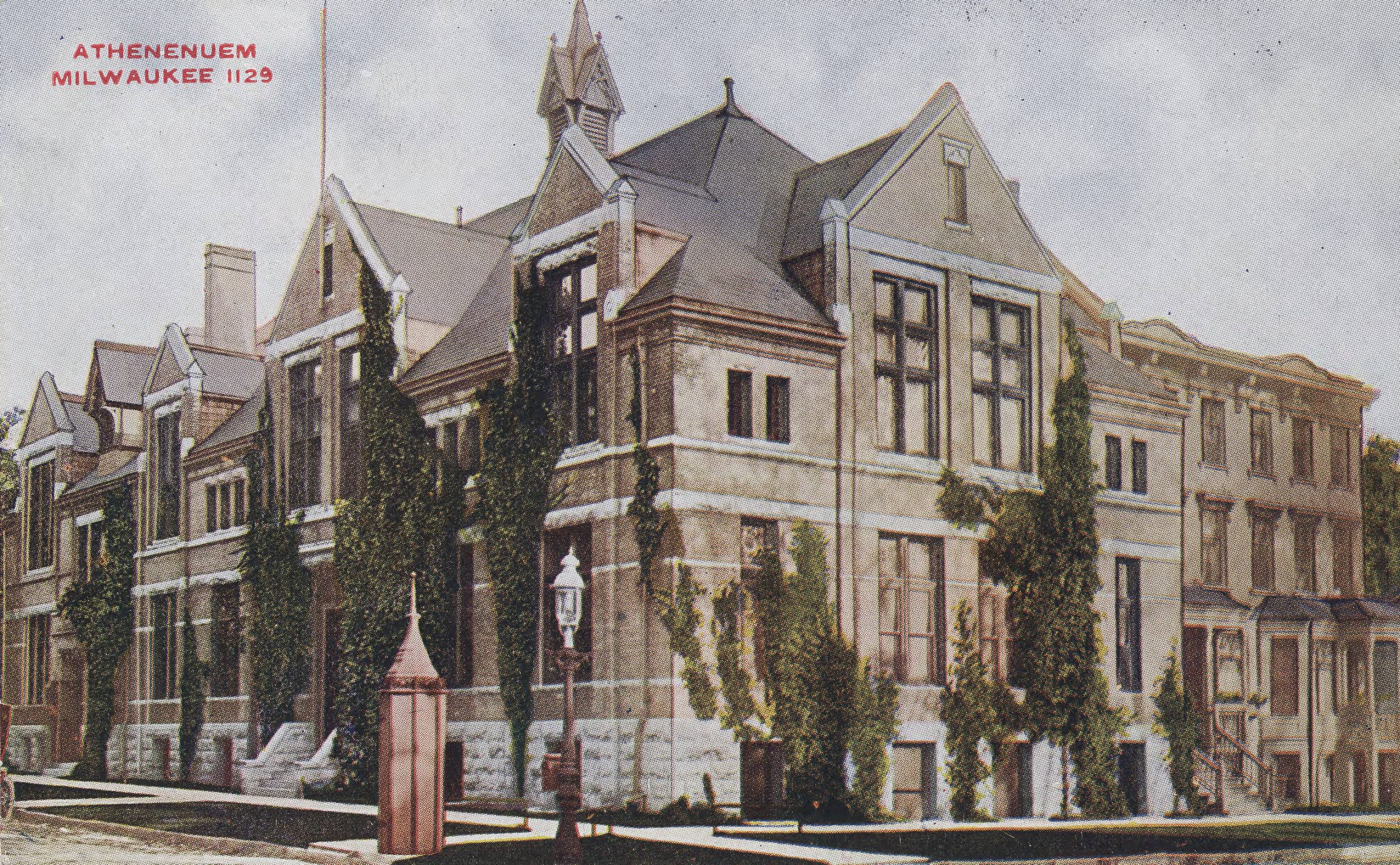 The “Woman’s Club Movement” dates from the mid-nineteenth century in the United States, as women expanded earlier more modest organizational efforts, such as reading clubs, sewing circles, and reform groups. Women’s clubs were more permanent organizations, run by women, for their own educational goals, civic improvement, and sociability. In 1890, club leaders from around the country founded the General Federation of Women’s Clubs, and by 1898, when women’s page columnist or Jane (“Jennie June”) Cunningham Croly, wrote her “history of the woman’s club movement in America,” she identified thousands of such clubs across the country, including in Milwaukee. The Milwaukee metropolitan area continues to be an active site for women’s clubs in the twenty-first century.[1]

The most prominent early example was the Woman’s Club of Wisconsin, which was founded in 1876 in Milwaukee. Its membership was largely drawn from society women, including Mrs. James S. Peck (nee Nellie M. Hayes), wife of the governor.[2] The Woman’s Club of Wisconsin emphasized educational programs for its members. Its activities were spurred on by Mary Mortimer, founder of the Milwaukee Female College, as well as a fundraising campaign to build a “permanent home” for the club, including a library and reading room. The College Endowment Association was formed in 1890 to support scholarships for women. It fostered the merger of Milwaukee Female College and Downer College to become Milwaukee-Downer College and Seminary.[3] Their efforts continue. The Woman’s Club of Wisconsin Foundation was established in 1965, “to allow members to make tax-deductible contributions in support of the charitable activities at the Club.”[4]

The number of women’s clubs increased rapidly after 1890 across the country and in Milwaukee. They began to develop into more civic-minded improvement organizations with membership adding middle-class women to the high-society register. These women’s clubs added an element of community development. As scholar Jacquelyn Masur McElhaney suggested, “Reform-minded women turned the concept of women’s sphere, with its concern for family well-being, into a justification for moving from the home into the public arena to confront situations that had an adverse impact on their families.” The Milwaukee Woman’s Club leaders called this approach “civilizing” the city.[5] As scholar Anne Firor Scott has noted, these women could “function as a kind of early warning system, recognizing emergent problems before they were identified by the male-dominated political process.”[6] For example, in 1894, several local clubwomen, along with Dr. Frances Sercombe, raised money and awareness for the Children’s Hospital in Milwaukee.[7]

In the twentieth century, particularly as the suffrage movement revived and women achieved voting rights, women’s clubs became more diverse. They proliferated among working-class women and ethnic and racial minorities. Clubs for professional women and clubs with more overt political agendas appeared.

Junior League chapters were common in cities across the country—in its early years membership was typically made up of wealthy white women. Milwaukee’s chapter of the Junior League was established in 1915 to educate women about social issues and to offer volunteer training. The League worked with the Red Cross during the wars, established children’s art programming, and later offered services for domestic violence victims. Like other chapters from across the country, the Milwaukee group raised funds though cookbooks, including Be Milwaukee’s Guest. The creation and promotion of fundraising cookbooks were a significant part of the lives of clubwoman and the home cooks who prepared the dishes. In Milwaukee, funds were raised for Gilda’s Club of Southeastern Wisconsin, Hunger Task Force, and various children’s projects.

By the 1940s in Milwaukee, members of the Zonta Club, a national organization of professional women, were active with the local Y.W.C.A. Building Fund, the Red Cross, war bonds, and civil defense. By May 1947, the group had ninety-five members, the fifth largest Zonta club in the United States. After the war, the Zonta members worked with other women’s organizations to build the War Memorial at the lakefront. They also advocated for a juvenile home and the creation of a juvenile court , which was based on a two-year study. Women’s clubs often hosted significant speakers. For example, in 1962, the Zonta Club featured lawyer Marguerite Rawalt, who was a member of President John Kennedy’s Commission on the Status of Women. Several well-known Milwaukee women were members of the organization, including Breta Griem, co-author of The Best from Midwest Kitchens and the host of a popular cooking show on WTMJ from 1949 to 1962. Ernestine O’Bee was the first African-American member of the Milwaukee Zonta Club in the mid-1960s.[8]

Clubs could also be quite exclusionary. Jewish women “were not welcome in the Wisconsin Federation of Women’s Clubs.”[9] The motto of the General Federation of Women’s Clubs (GFWC) was, “We look for unity, but unity in diversity.” But the actual practice of the federation and local clubs was quite different and painfully highlighted in the actions at the 1900 national GFWC meeting in Milwaukee. Black reporter Josephine St. Pierre Ruffin attempted to attend as a representative of three Boston women’s clubs—the New Era Club, the New England Woman’s Club, and the New England Woman’s Press Association. Southern women led by President Rebecca Douglas Lowe told Ruffin that she could be seated as a representative of the two white clubs but not the black one. She refused and was excluded from the meeting. The moment became known as “The Ruffin Incident” and was widely covered by the media.

African American clubwomen belonged to the National Association of Colored Women’s Clubs, founded in 1896. The Milwaukee chapter of the National Association of Colored Women’s Clubs has a long history and was involved in social issues and community development. In the mid-twentieth century, for example, black women in Milwaukee created La Circle for employed women, whether in offices, factories or stores. They fought against injustices and changed policies against gender and race discrimination in the city.[10]

In more recent decades women clubs have shifted causes to work on domestic violence, human trafficking, and other local issues. They clubs have also become more diverse in membership to reflect the communities they serve.

Ortlepp, Anke. “‘Give to the Poor! Yourself You’ll Bless!’ Jewish Charities in Milwaukee, Wisconsin, 1850-1914,” German-Jewish Identities in America: From the Civil War to the Present, edited by Christof Mauch and Joseph Salmons, 21-39. Madison, WI: Max Kade Institute, 2003.