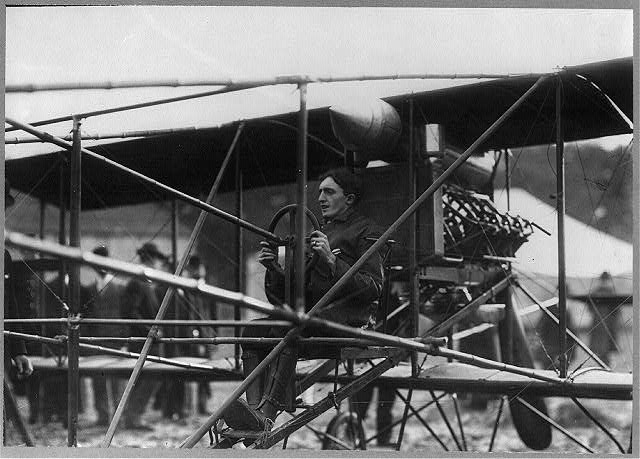 Since the early 1900s, airports have served as a site for recreation, commercial travel, and the transportation of goods. Today, General Mitchell International dominates Milwaukee air travel, but other small airports serve the area as well.

The first flight in Milwaukee is believed to have been made at the Wisconsin State Fair on September 10, 1906 by stunt pilot Charles K. Hamilton.[1] While this flight was a success, a later accident highlighted the danger of air transportation. On September 16, 1910, stunt flyer Arch Hoxsey crashed into a crowd at the State Fair grounds, injuring at least 9 spectators.[2] Indeed, accidents were common occurrences in the early years of air transportation. Only after World War One inspired technical advances in the field of aeronautics did air travel become routine in the United States.[3]

In 1919, Alfred Lawson began building an airplane and approached the Milwaukee County Park Commission about creating an airport.[4] The commission suggested the recently-acquired Zimmerman farm, now the site of James Currie Park in Wauwatosa.[5] The Wisconsin State Senate confirmed the Park Commission had the legal authority to establish an airport on public lands[6] and appropriated $5,000 for the improvement of the field.[7] It was called the “Milwaukee Air Port” or the “Lisbon Avenue Airport.”[8]

In the 1920s, flying became a recreational activity. The airport in Milwaukee often drew crowds on the weekends. One report placed 200 cars at the field on any given Sunday afternoon during good flying weather.[9] Passengers paid $5 for a 10-minute trip.[10] Less adventurous spectators watched stunt pilots and “air derbies.”[11]

At the same time, new federal laws encouraged the development of commercial airlines. The Air Mail Act of 1925 allowed private carriers to deliver airmail, while the Air Commerce Act of 1926 established regulations.[12] Thomas Hamilton, the owner of Hamilton Aero Manufacturing, built an airport in the Town of Lake in 1920. In order to join the new nationwide air transportation network, Milwaukee County purchased this airport in 1926, renaming it “Milwaukee County Airport.”[13] The County rejected the Currie Park airport because a river on one side and railroad tracks on the other prevented its expansion.[14] One year later, Northwest Airlines expanded its role as Milwaukee’s airmail contractor and became the first company to offer passenger service to Chicago and the Twin Cities.[15] In 1941, the airport’s name was changed to “General Mitchell Field” in honor of Billy Mitchell.[16] The airport has been repeatedly expanded and updated to keep up with changes in the airline industry.

Early Milwaukee aviation promoters believed that an airport close to downtown was necessary for the city’s growth.[17] In 1927, the City of Milwaukee opened Maitland Field on the lakefront.[18] Maitland Field was named after Milwaukee-born Lester Maitland, who flew the first trans-Pacific flight. Its proximity to the Chicago and North Western Railroad depot made intermodal transportation especially convenient.[19] By 1929, regular seaplanes carried passengers from Maitland Field to Grand Rapids, Michigan.[20] Unfortunately for Maitland Field’s boosters, it was not ideally situated. It was built on landfill made from garbage.[21] Sharp objects regularly punctured landing gear.[22] The city’s tall buildings and the strong crossway lake breeze made navigation difficult.[23] The airport struggled financially until the mid-1950s, when it was finally closed.[24] The United States military repurposed the airport in 1956, turning it into a Nike Anti-Aircraft Missiles site. In 1970, the former field became the Summerfest grounds.[25]

World War Two again transformed the national airline industry. The US military leased part of General Mitchell Field between 1942 and 1948.[26] Late in the war, a German prisoner of war camp was located at the airport.[27] The war spurred both technological advances in aviation and popular interest in flying.[28] By 1948, three new carriers began service to Milwaukee to meet the demand for air travel, prompting the county to construct a new air terminal at General Mitchell Field.[29]

Commercial air travel to and from Milwaukee expanded in the 1950s and 1960s. Between 1950 and 1960, the number of passengers served annually in the area increased from 235,000 to 758,000.[30] Despite this huge increase, officials believed that the city’s proximity to Chicago’s O’Hare Field inhibited local air traffic levels.[31] The County continued to improve Mitchell Field in hopes of inspiring carriers to make Milwaukee a hub and offer non-stop service from the city.[32]

Federal deregulation of air travel allowed a large number of new routes to and from Milwaukee.[33] The Airline Deregulation Act of 1978 phased out the Civil Aeronautics Board, allowing airlines to start and end service to anywhere at will.[34] Deregulation, coupled with the increasing use of jet airliners, caused a huge surge in air travel in Milwaukee; in 1986 almost 3.4 million passengers were recorded.[35] General Mitchell Airport also became a hub for a few airlines, including Northwest Airlines and Midwest Express.[36] The County expanded Mitchell Field to accommodate this growth. Transportation of cargo by air also increased in the 1980s.[37] In 1986, the airport was renamed General Mitchell International Airport when a United States Customs’ station was added.[38] A 16-gate addition opened in 1990; another 8 gates were added in 2007, bringing the total number of gates up to 50.[39]

Although Mitchell Field dominates local air travel, the Milwaukee area is home to several other airports. Some of the larger airports, such as Waukesha County’s Crites Field and the West Bend Municipal Airport, offer both private and general aviation.[40] Lawrence J. Timmerman Airport, located on Milwaukee’s Northwest Side since 1929, hosts private charter flights and general commercial aviation.[41] Timmerman Airport has been managed by Milwaukee County since its purchase 1947.[42]

In addition, there are a large number of small, private airports around the Milwaukee area. Several smaller Milwaukee-area airports no longer exist. The privately-owned Hales Corners Airport (1946-1977) was located directly west of Whitnall Park at Highway 100 and West College Avenue near the Franklin/Hales Corners border.[43] Cronin Field, renamed Rainbow Airport, was located near Ryan Road and South 76th Street in FRANKLIN between 1946 and 1996.[44] Aero Park was located in Menomonee Falls from the 1940s until 2004.[45] All three of these former airfields offered passenger and commercial flights. 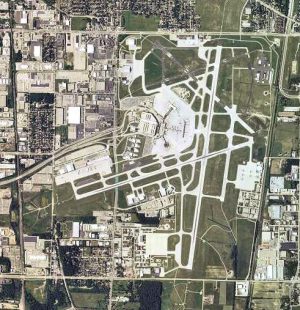