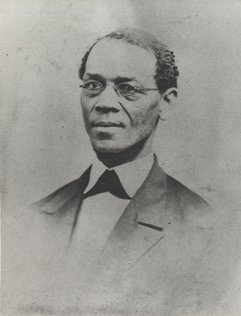 Milwaukee’s black community was small in the 1800s, and St. Mark counted only nine founding members.[4] Many of these early members were former slaves who became prominent members of Wisconsin’s African American community.[5] Ezekiel Gillespie, famous for his role in securing the vote for Wisconsin’s African American residents, is credited with the founding of the church. Gillespie petitioned the regional AME bishop, requesting a pastor be sent to Milwaukee.[6] On January 9, 1869, the congregation held its first meeting in a rented room along what is now Wisconsin Avenue.[7] Recognizing its small size, the congregation considered creating a union church for African Americans of various denominations or merging into the nearby white Methodist Episcopal Church.[8] Encouraged by a visit from the bishop, however, the members decided to remain within the AME communion.[9]

After meeting in an old engine house and, for many years, the former German Zion Evangelical Congregation building, the congregation dedicated its first new church building on 4th Street and Kilbourn Avenue in 1887.[10] This building was the first Wisconsin church constructed for an African American congregation, and with its dedication, the congregation was rechristened St. Mark.[11]

Initially viewed by new waves of black migrants as a church for Milwaukee’s established and middle-class African American community, St. Mark began offering social service programs for newcomers in the 1920s.[15] Cecil A. Fisher, pastor from 1927 to 1931, went on to become Milwaukee’s first African American welfare case worker and a chairman of the Milwaukee Housing Authority. Throughout the early twentieth century, St. Mark leaders joined with other local church and civic groups to support human rights and advocate for the African American community.[16]

During the 1960s and 1970s, under the leadership of Rev. Lovell Johnson, Sr., St. Mark expanded its social justice programs. The church began tutoring programs, founded a credit union, opened low-income apartments for the elderly, and instituted a discussion forum to educate and engage the community on political and social issues.[17] Johnson oversaw the creation of quality of life centers which provide a variety of social services to the community.[18] Many of the era’s most prominent African American leaders, including Vel Phillips, were members of St. Mark.[19]

Due to urban renewal and freeway construction in the 1960s, St. Mark was forced to once again find a new home. Located in the path of I-43, the church was demolished and the congregation undertook its second church construction project.[20] Like other church buildings in the Inner Core, St. Mark faced difficulties securing financing from lenders who viewed the area as a risky investment.[21] Despite these setbacks, the congregation dedicated its current church at the celebration of its centennial in 1969.[22] Known as the Church of the Anvil, the building is intended as a reminder of the first AME congregation’s meetings in a Philadelphia blacksmith shop.[23]

St. Mark AME is part of the international African Methodist Episcopal communion, which consists of twenty districts in thirty-nine countries.[24] Along with the rest of the Midwest, Milwaukee is part of the church’s fourth episcopal district.[25] Including St. Mark, there are seven AME churches in Milwaukee, all of which are located in the city’s North and Northwest sides.[26] Estimates from 2010 suggest over 2,000 African Methodist Episcopalians worship in the Greater Milwaukee area.[27] At the 2016 general conference of the AME Church, St. Mark pastor Rev. Darryl Williams stood as a candidate for bishop, but was not elected.[28]