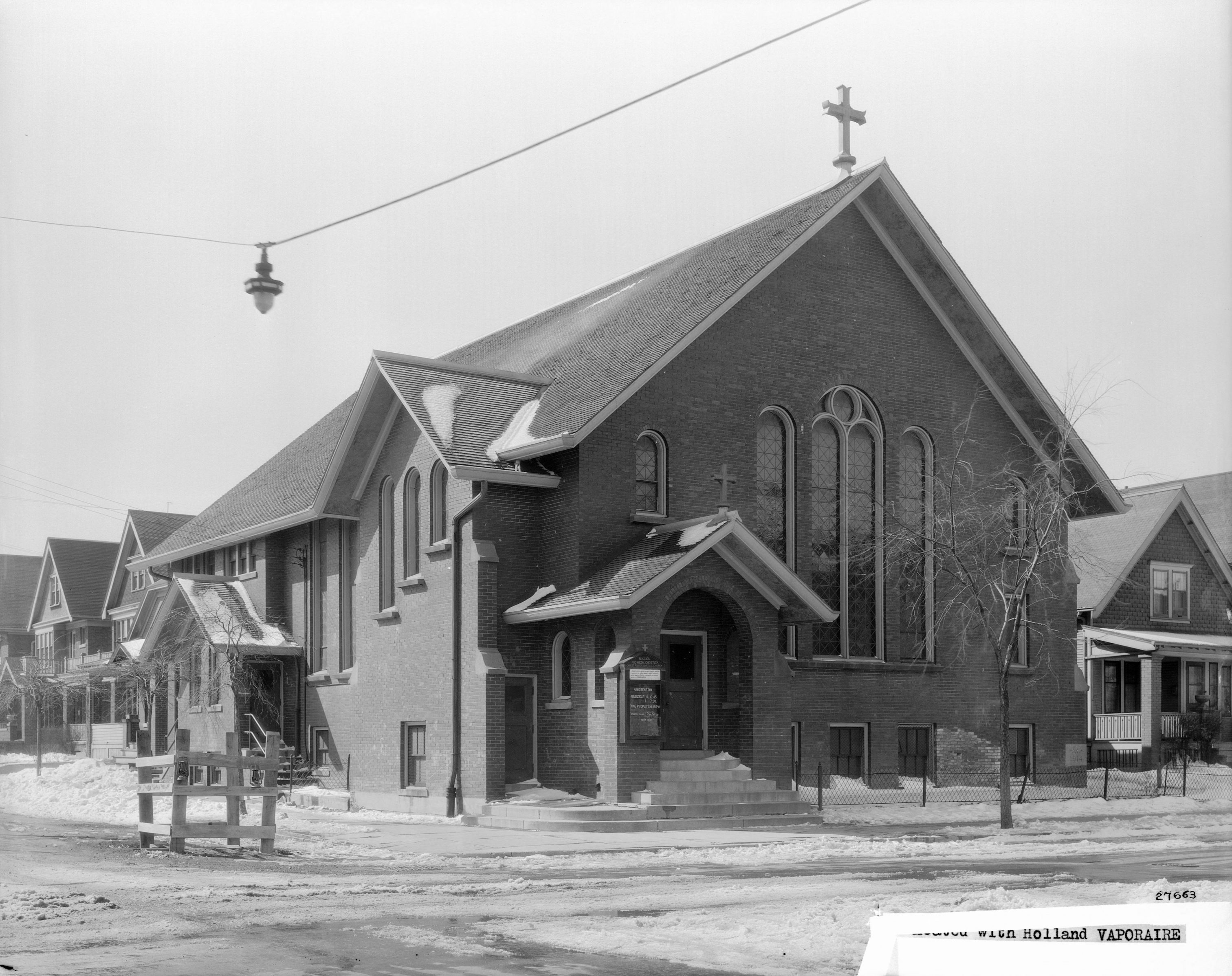 Baptists were among the earliest faith communities in Milwaukee, holding their first meeting in 1836. As fervent believers in congregational self-determination, Milwaukee’s Baptists have become a diverse and multi-confessional group. In 2010, over 45,000 Baptists worshipped in the greater Milwaukee area as part of at least thirteen denominational bodies. The organizations with the largest number of adherents were, in descending order, the National Baptist Convention, USA, Inc., the Southern Baptist Convention, and the American Baptist Churches in the USA.[1] Through local and national conventions as well as independent congregations, Baptists have left a variety of imprints on Southeastern Wisconsin.

The first Baptist services in Milwaukee were held in 1836 in various homes in Walker’s Point as well as in a schoolhouse.[2] Led by a missionary from the Baptist Home Mission Society, this small congregation was only the second Baptist church in Wisconsin. An earlier congregation near Lake Winnebago had been formed by Brothertown Native Americans while the Milwaukee church was the first to minister to Yankee-Yorker migrants.[3] Without a permanent pastor or church building, the Milwaukee congregation was abandoned in the late 1830s.[4] A few years later, in 1841 and 1842, new congregations (both with ties to the original Milwaukee group) established themselves as the First Baptist Churches of Milwaukee and of Greenfield (now West Allis).[5] Milwaukee’s congregation erected its first permanent building in Juneautown in 1844.[6] Another church then formed west of the Milwaukee River in 1857; these two congregations briefly unified from 1865 to 1867.[7] In 1855, what would eventually be titled the First German Baptist Church was founded. A half century later, roughly twenty percent of Wisconsin Baptists belonged to either German or Scandinavian churches.[8]

Despite nineteenth-century steady growth on the American frontier, the Baptist Church, like many American denominations, became divided over appropriate responses to slavery. This disharmony led to the founding of the Southern Baptist Convention in 1845.[9] While most Milwaukee Baptists and their Northern coreligionists were opposed to slavery, congregations differed in their embrace of abolitionism.[10] Wauwatosa’s Underwood Memorial Baptist, for instance, was founded by and for abolitionist Baptists seeking greater church involvement in the anti-slavery movement. However, Enoch Underwood, the church’s pastor, was considered too politically radical by many of his local contemporaries. [11] After the Civil War, divisions between northern and southern Baptists became further entrenched. Northern Baptists coalesced into a convention, the precursor to the American Baptist Churches in the USA, in 1907.[12] Free Will Baptists, who among other beliefs were staunchly abolitionist, founded one of their first Wisconsin congregations in New Berlin in the 1840s and joined with the Northern Baptist Convention in 1911.[13]

The abolition of slavery had a profound effect on the growth of African-American Baptist communities, including those in Milwaukee. The city’s first black Baptist congregation, originally called Mt. Olive (and now Calvary Baptist) was founded in 1895.[14] The congregation met at various locations around the city, including its first 1897 church building on what is now St. Paul Avenue, before dedicating its current building at 2959 N. Teutonia in 1971.[15] In the early 1900s, Calvary joined the Wisconsin Baptist Convention.[16] As more even migrants arrived in Milwaukee from the South, however, many new Baptist congregations aligned with the historically-black National Baptist Convention of the U.S.A., Inc., which became the largest Baptist body in the region by the 2000s.[17] Many of these new congregations, beginning in homes or storefront churches, reflected their working-class membership.[18] By 1945, Milwaukee had at least twelve black Baptist churches. The influence of these churches on both the local community and the larger Baptist communions continued to increase.[19]

In 1952, Milwaukee hosted the National Sunday School and Baptist Training Congress of the National Baptist Convention of the U.S.A., Inc., drawing around 5,000 attendees to the city.[20] While Milwaukee had hosted Baptist conventions in the past, including the Northern Baptist Convention conferences in 1938 and 1948, this large meeting of African-American Baptists drew local white attention to Milwaukee’s growing African-American community.[21]

In the postwar years, local Baptists became involved in the civil rights movement. Social involvement was not new to Baptists in Milwaukee, however. In addition the abolition movement, Milwaukee’s white Baptists had advocated for temperance and had pursued social programs for new immigrants.[22] In 1921, the Baptist Women’s Association founded the South Side Milwaukee Christian Center as a settlement house for Eastern European immigrant youth. African-American congregations, including Calvary Baptist, provided similar resources for newly-arrived black Milwaukeeans.[23] During the 1950s and 1960s, Milwaukee Baptist pastors, especially within historically black churches, pushed for the political and economic enfranchisement of Milwaukee’s black community.[24] This push took different forms in different congregations. While some Baptists worked for the assimilation of new migrants into Milwaukee society and advocated political involvement, others embraced social activism including tactics such as boycotts and strikes.[25] Although these activities were predominantly led by African American Baptists, some white Baptist congregations also participated.[26]

At the same time that Milwaukee Baptists were confronting the region’s racial disparities, they encountered shifts within the makeup of Milwaukee’s Baptist communities. Established Baptist churches in Milwaukee faced the suburbanization of their congregants. At the same time that new churches were established in suburbs like Oak Creek, older Milwaukee congregations shrunk.[27] When a 1974 fire destroyed the First Baptist Church of Milwaukee (by this time located at 911 E. Ogden Avenue), the small congregation decided not to rebuild.[28] After meeting in rented locations for eight years, First Baptist dissolved in 1980.[29]

While established congregations struggled, new congregations (many of them members of the Southern Baptist Convention) established themselves. Southern Baptist congregations, of which the Milwaukee–Racine–Kenosha area had eight by 1965, fell under the leadership of the Baptist General Convention of Texas until the establishment of a Minnesota-Wisconsin Convention in the early 1980s.[30] By 2010, the Southern Baptists had eclipsed the American Baptist Church in the USA to become greater Milwaukee’s second-largest Baptist convention.[31] Local Baptists continued to expand their outreach to new immigrant groups, especially within the Spanish-speaking community, in the late twentieth century.[32]