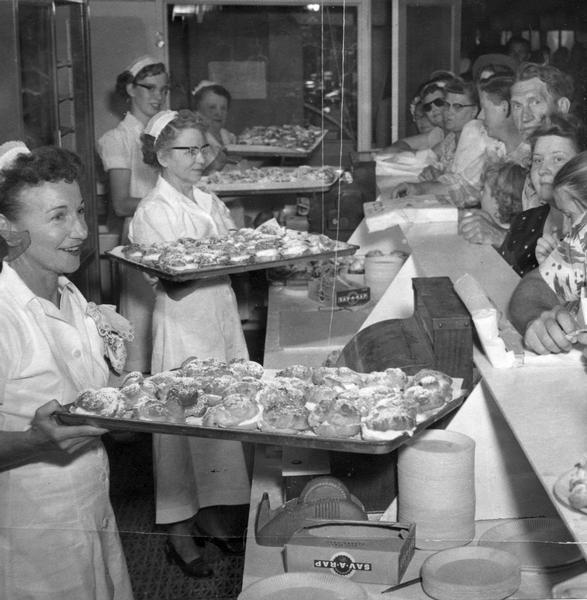 The Wisconsin State Fair is an annual, eleven-day festival that celebrates Wisconsin farming, livestock, and agricultural products. The first Wisconsin State Fair took place in 1851, along the Rock River in Janesville.[1] The fair lasted only two days, and 13,000-18,000 patrons attended the festivities.[2] Over the next forty years the fair moved to various locations across the state, including Fond du Lac, Watertown, Milwaukee, and Madison.[3] In 1891 the Agricultural Society of the State of Wisconsin choose a new location for the fair, purchasing land in West Allis and constructing a 6,000-seat grandstand along with a large racetrack and exhibition halls for animals and commodities. Farmers and agricultural enthusiasts competed for blue ribbons in livestock and produce competitions; horse races garnered large crowds of spectators; and local musicians performed on small stages scattered throughout the grounds.[4] Livestock shows featured cattle, horses, sheep, and swine. As more farmers brought their animals to the fair for a coveted blue ribbon and prize money, fair officials and the Blue Ribbon Sale of Champions Foundation created the Wisconsin Governor’s Auction in 1968. Sitting Wisconsin governors continue to preside over the auction, and all bids are given to the Wisconsin 4-H Foundation to fund scholarships for promising Wisconsin students.[5]

The University of Wisconsin-Madison, the state’s land grant university, has naturally developed a close relationship with the fair. One day each year is “UW Day,” which features activities for fair patrons organized by the Wisconsin Alumni Association.[9] In return for small donations of canned goods or school supplies at the gate, fairgoers receive a ticket discount and are treated to a parade by the University of Wisconsin Marching Band.[10] Today the Wisconsin State Fair draws over one million visitors every year, offering patrons musical entertainment and amusement rides, along with a plethora of food items that promote Wisconsin’s dairy heritage.[11] 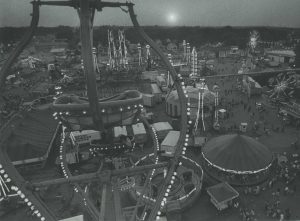