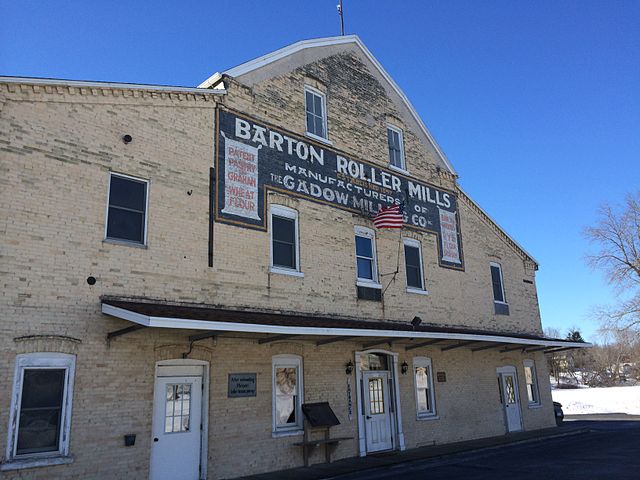 While Washington County appears on the United States Census of 1840, the town was not listed until 1860. Its population was 1,376 people. Most were farmers born in Prussia or Germany.[3] By 1870, the town’s population had grown to 1,400, but by 1950 it dropped to 1,029.[4] This apparent decrease in population occurred because the Village of Barton was incorporated in 1925, shifting how the town’s residents were counted.[5] In 2010 the Town’s population was 2,637 people, of whom 98 percent were white, with small numbers of Asians and African Americans.[6]  Over the years, the population of the town has remained small because it contains 12,376 acres classified for agricultural use.[7]

Barton Salisbury was the area’s first settler. On a mission surveying the Milwaukee River in 1845, he identified rapids that were well suited to power a sawmill. He soon built one in the area that became Salisbury’s Mills.[8] In 1848, the name was changed to Newark, but in 1853 the Washington County Board of Supervisors reverted it to Barton in honor of its founder.[9]

The Town of Barton had its beginnings in the sawmill industry. For example, Morris Wait founded Young America in 1851. Wait harnessed the Milwaukee River to power his new sawmill, but it burned down three hours after opening.[10] Many local sawmills were converted to flour mills, attracting grain farmers from neighboring counties.[11]

The area’s early ministers often preached in schoolhouses or the homes of residents. The first church on record is the German Methodist Church, also known as the Knopp Church, in 1850.[12] By 1852, the Presbyterian Society of Newark (then located in the Village of Barton) was organized to serve families of English, Scotch, Irish, and Dutch descent.[13]  By 2010, approximately one-third of Town residents were Roman Catholic, with Protestants making up another third.[14]

Two early schools served Barton’s children. The first classes were held in Barton Salisbury’s home.[15] Barton School was opened in 1856 and sponsored by Father Caspar Rehrl. Its teachers were nuns the Congregation of St. Agnes.[16] Today, Town of Barton children attend West Bend schools. The most common sources of contemporary employment in the town are construction, health care, metal products, machinery, department and general stores, electrical equipment, and educational services.[17] In 2010, the town contained 1,033 housing units; 655 had mortgages, 270 were owned outright, and 108 were rented.[18]