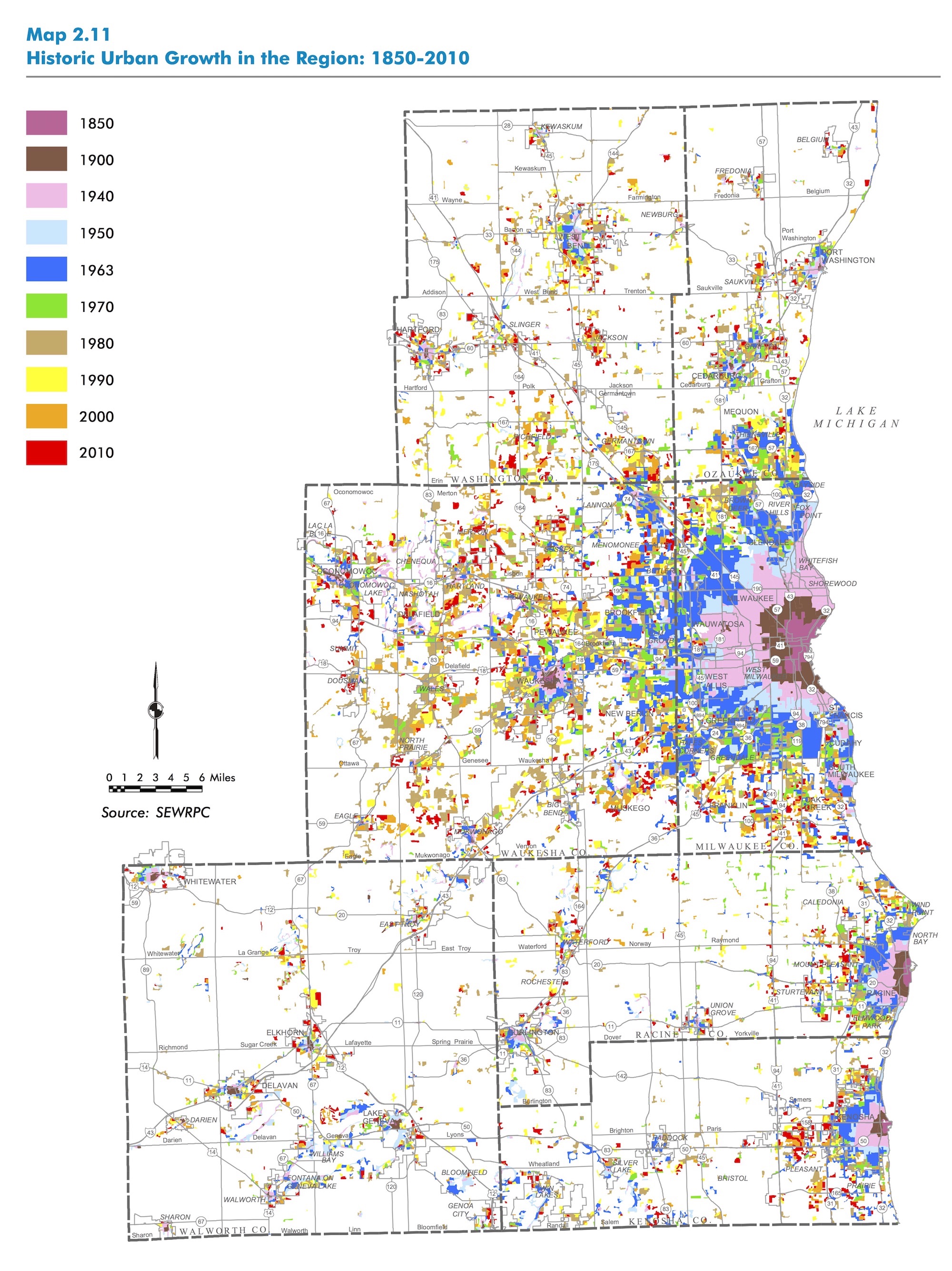 Since 1960, the Southeastern Wisconsin Regional Planning Commission (SEWRPC) has prepared and published long-range, comprehensive plans to guide physical development in Wisconsin’s southeastern counties of Kenosha, Milwaukee, Ozaukee, Racine, Walworth, Washington, and Waukesha. SEWRPC was authorized by an executive order from Governor Gaylord Nelson, recognizing that “problems of physical and economic development and of environmental deterioration transcend the geographic limits and fiscal capabilities of local units of government.”[1]

In 2014, the region’s 2,689 square miles, or about 5% of the area of Wisconsin, contained about 2,000,000 persons, or 35% of the state’s population. The region was divided into 154 general-purpose local units of government, including seven counties; twenty-nine cities including twelve of Wisconsin’s twenty-five largest cities (led by Milwaukee with a 2014 population 599,642); sixty-one villages; and fifty-seven civil towns. All participate in the planning process.[2]

All SEWRPC plans are advisory, leaving implementation to federal, state, and local governments. State law designates SEWRPC as the official area-wide planning agency for the region.[3] It is certified as the Metropolitan Planning Organization (MPO) for southeastern Wisconsin by the Federal Highway Administration, a prerequisite for federal highway grants.[4]

SEWRPC pioneered in combining land use and transportation planning, recognizing that transportation (including mass transit) and urban development are interrelated elements of a single system. To accomplish this, SEWRPC made early use of computers to analyze large amounts of data in developing regional plans.

The first and all subsequent generations of the land use and transportation plan (with design years of 1990, 2000, 2010, and 2035) recommended that virtually all new urban development in the region occur in and around established urban centers where transportation, communication, sewerage, and other utilities could be extended.[5]

SEWRPC is financed by federal and state grants, a special property tax levied on local governmental units by counties, and service agreements, or contracts for special work requested by member governments. Its 2014 budget was $7,588,901.[6] It is governed by twenty-one commissioners, three from each county—one appointed by the county, one by the governor, and one by the governor from lists provided by counties. Its offices are in Waukesha.[7]